A High Wind Warning for the Cascades and Cascade Foothills in both Oregon and Washington is still in effect until 7 p.m. Tuesday. 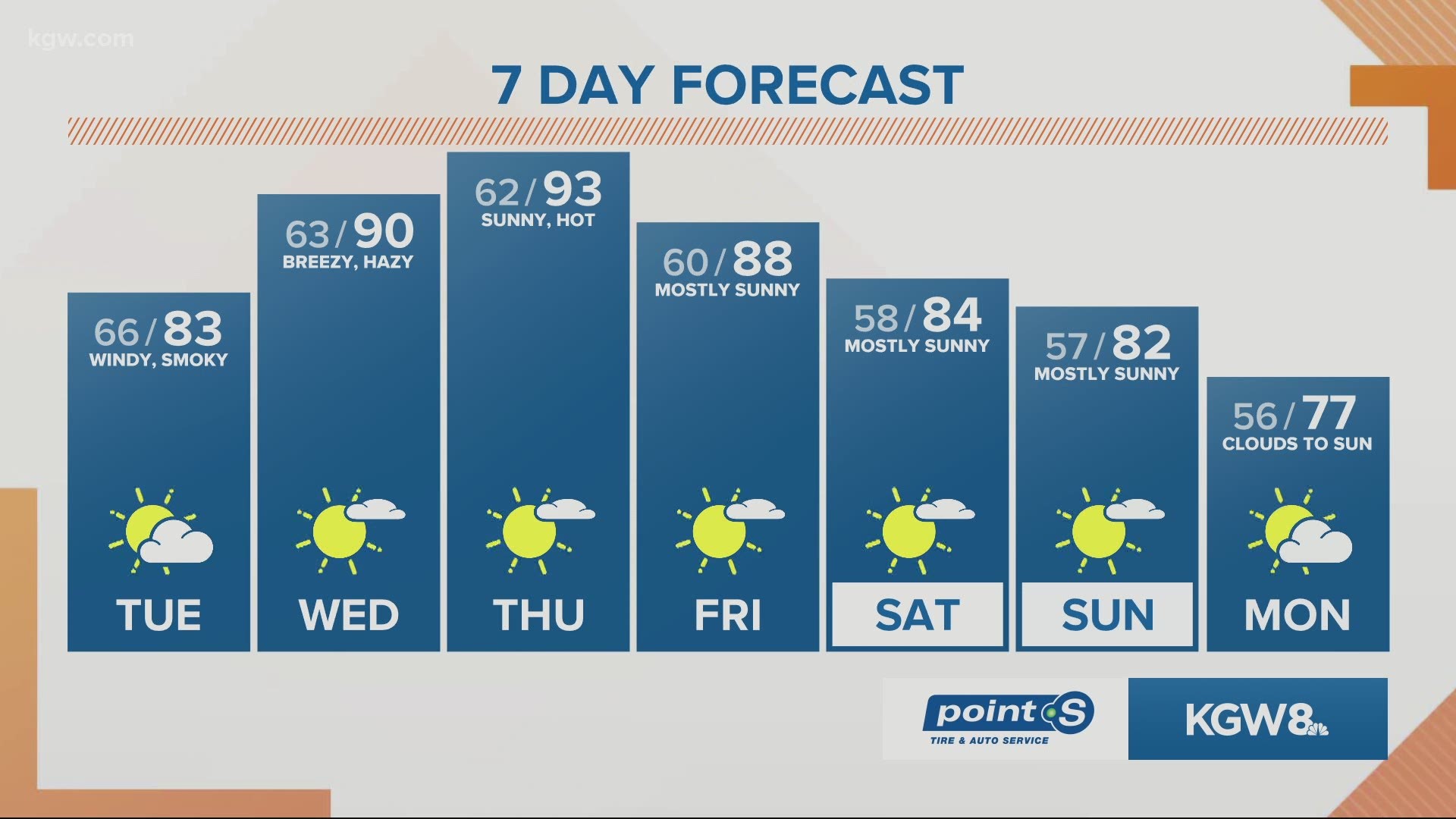 Portland General Electric (PGE) reported around 11:30 p.m. Monday that 100,000 customers were without electricity due to more than 560 downed power lines. As of 12 p.m. Tuesday, about 76,000 people remained without power, according to PGE.

Pacific Power reported about 21,000 customers were without power statewide as of Tuesday morning.

Wind gusts from Monday evening, including the peak of 52 mph at PDX. Wind Warning set to expire at 1:00 pm today. It is possible the strongest winds took place last evening. pic.twitter.com/Y0PyzMV7eq

A High Wind Warning for the Cascades and Cascade Foothills in both Oregon and Washington was still in effect until 7 p.m. Tuesday.

Just before 5 p.m. on Monday, high winds made their way into Portland, bringing with them wildfire smoke from eastern Washington wildfires. 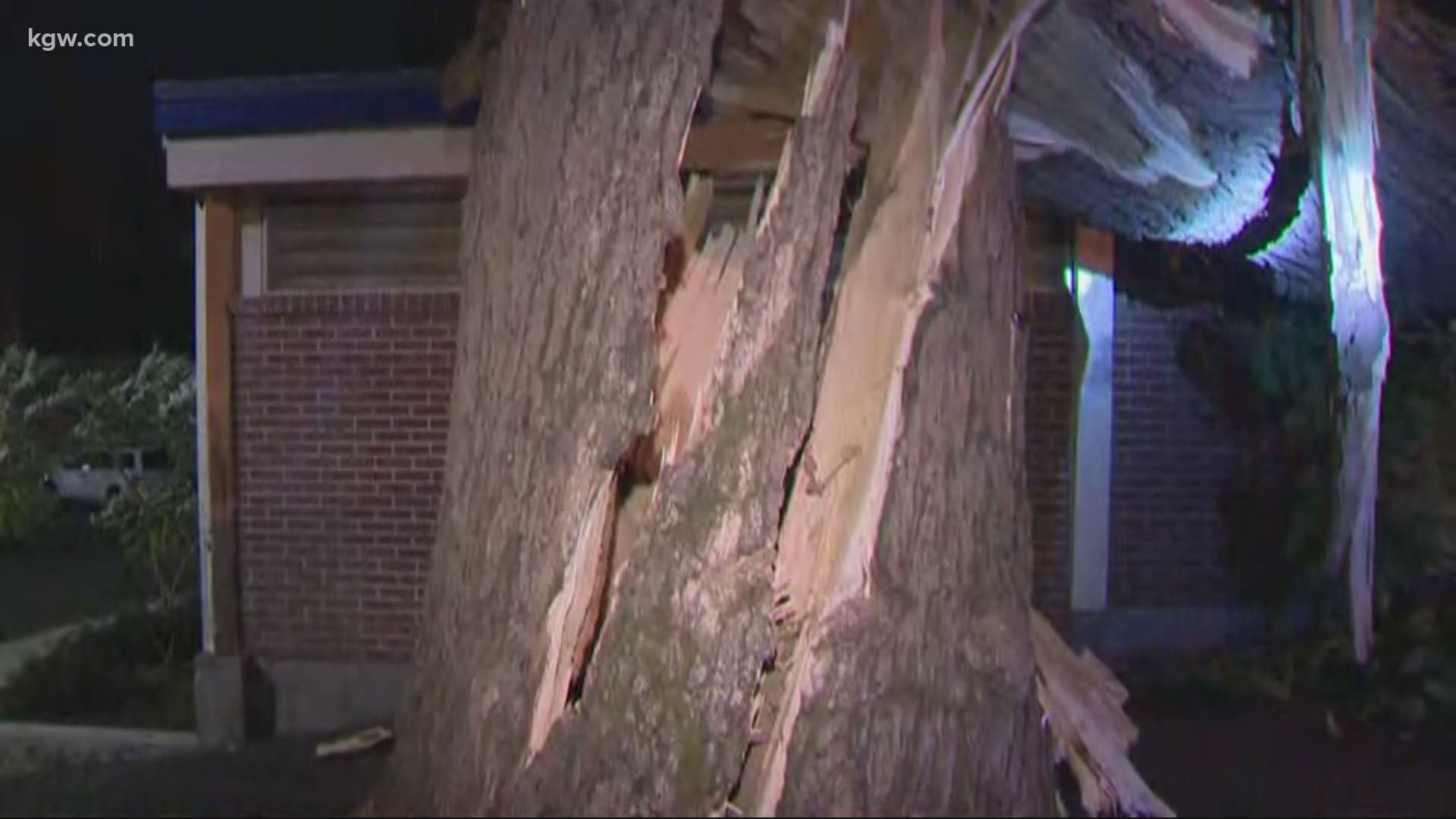 PGE announced that beginning at 7:30 p.m., it would cut the power for 5,000 customers in a "high-risk fire zone" along Highway 26 from Alder Creek and Brightwood to Government Camp.

PGE anticipated the outage lasting between 24 and 48 hours.

Images of down limbs and trees started coming in from all over the region Monday evening.

The conditions were extremely dangerous for fires, which spread quickly in the strong winds.

Emergency crews were busy all evening putting out brush fires that popped up in multiple counties including one in Oregon City near the Clackamette Cove. Crews were able to put the fire out by 11:40 p.m.

The NWS urged people to use extreme caution with ignition sources. A Red Flag Warning was in effect for Northwest Oregon and Southwest Washington.

Your pics: Eerie skies across Oregon after historic wind event

The Oregon Department of Forestry said all state forests were in Extreme Fire Danger.

The Oregon Department of Transportation (ODOT) warned that travelers could even see trees falling into the highways.

"Motorists should keep their hot vehicles away from dry grass, make sure chains aren’t dragging and causing sparks and never throw flammable materials out the window," ODOT spokesperson Katherine Benanati said Monday afternoon. "Remember, the devastating Eagle Creek Fire of 2017 was caused by a single, legal piece of fireworks. We all have a role in trying to limit wildfires in Oregon, especially in the hot, dry and windy conditions we face this week."

Because of the smoke in the air, the Oregon Department of Environmental Quality (DEQ) issued an Air Quality Advisory for the Portland metro area through Tuesday afternoon. 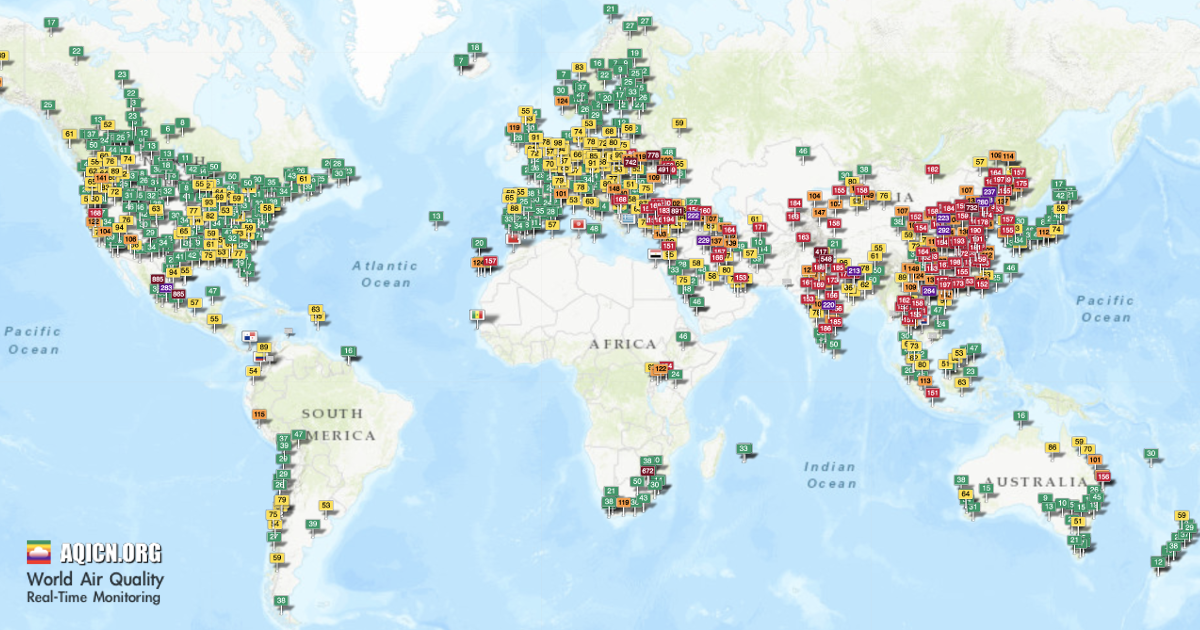 Air Pollution in Oregon: Real-time Air Quality Index Visual Map
Usage Notice: All the Air Quality data are unvalidated at the time of publication, and due to quality assurance these data may be amended, without notice, at any time.

RELATED: PGE may shut off power near Mt. Hood due to wildfire danger

RELATED: High Wind Warning in effect at 5 p.m., in the midst of 90-degree heat