Tear gas in the air, officers hit the streets on Day 63 of Portland protests

As protesters voiced mixed reaction to the possible upcoming departure of federal officers, it was another night of protest outside the federal courthouse. 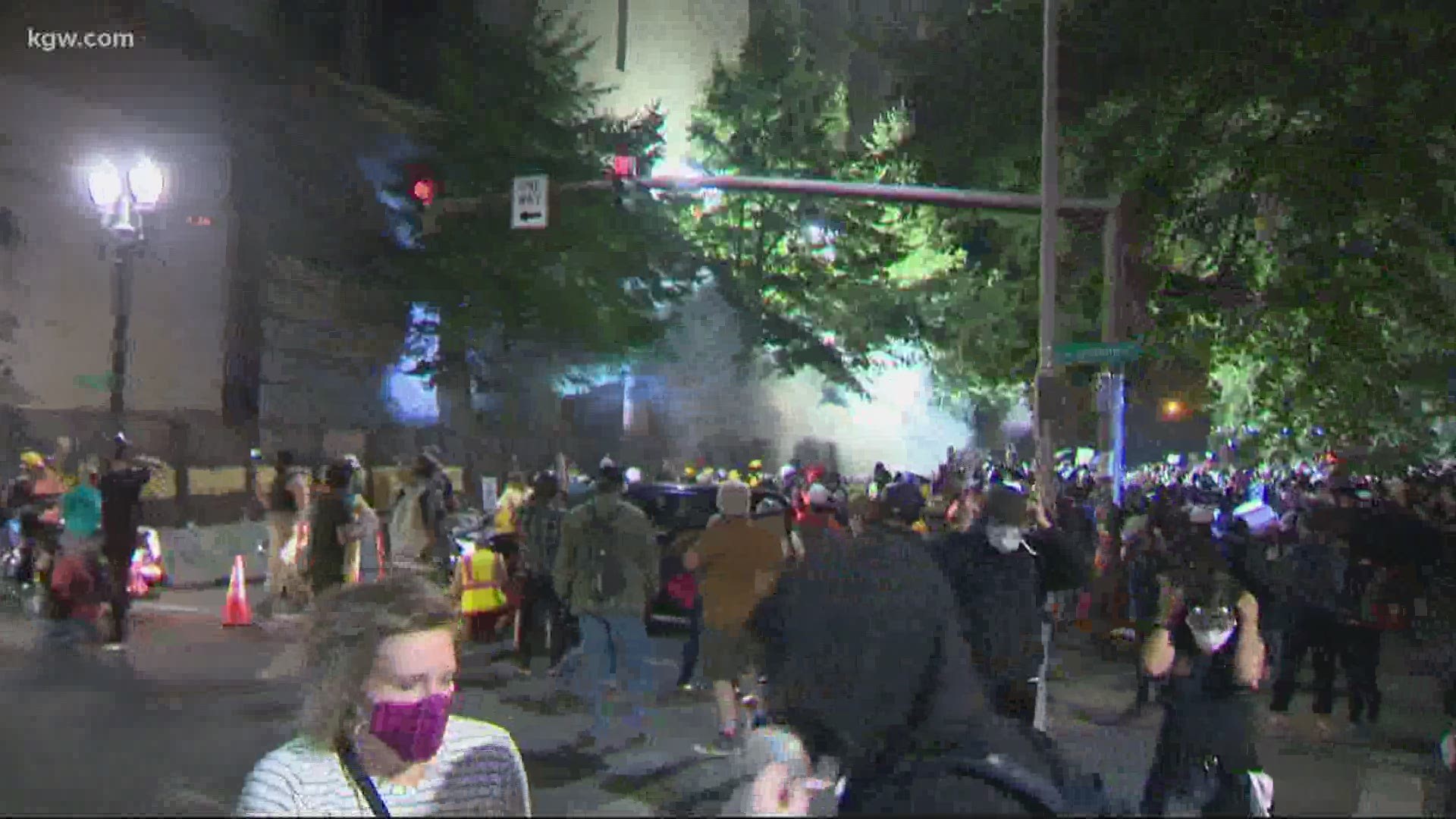 PORTLAND, Ore — Hours after competing messages were announced about the possibility of federal officers leaving Portland, those officers and protesters again mixed it up Wednesday night on the 63rd day of protests. Tear gas again filled the air as protests continued late into the night and early morning hours, causing officers to head into the streets to push back demonstrators.

There is mixed reaction from protesters about the news that federal officers may start leaving the area as soon. That could start as soon as Thursday or may not happen anytime soon. It depends on which state, local or federal official is talking.

Just after 11 p.m. Wednesday, officers outside the Mark O. Hatfield federal courthouse fired off a round of tear gas. It's not clear what prompted the deployment of the gas. The crowd quickly re-formed outside the fence line only to come under fire from gas and less lethal rounds a few minutes later.

In one video posted to Twitter, there was a dramatic face-off between officers on one side of the fence around the courthouse and gas mask-wearing members of the Wall of Moms on the other.

At about 11:50, officers appeared back outside the fence line and started pushing the protesters up Southwest 2nd and 3rd avenues toward Salmon Street. Tear gas, flash bangs and less lethal rounds were used to push back the crowds. Video posted to social media showed some people taken into custody, but it was not clear how many.

In the early morning hours Thursday, federal officers were spotted in a white minivan and a black SUV outside the courthouse as they were patrolling. Some people on social media implied it was a reminder of what happened earlier this month after a man said he was grabbed by federal officers off the street and taken away in an unmarked van.

By 2:30 a.m., the situation had calmed and many of the federal officers had returned to the courthouse.

The night started peacefully around 9 p.m. when a crowd had gathered for a vigil outside Portland City Hall. Speakers called on Mayor Ted Wheeler and other city officials to do more to get federal officers out of Portland. A caravan of supporters drove by and honked.

Here’s the scene at #PDX City Hall. A #BLM vigil calling on @tedwheeler & other city officials to do more to get the feds out. A parade of supporters drove by, honking. pic.twitter.com/YQsfMfs0F5

“You don’t have to whisper it anymore ... Black lives matter!!!”

We walked into the crowd (seen above) to hear & film the speakers. This is one block south of the federal courthouse/the federal officers.#PortlandProtest pic.twitter.com/sTeCUx51Af

Gov. Kate Brown and the White House on Wednesday issued pivotal, and at times contrasting, messages about the possibility of the Trump Administration pulling federal officers out of Portland.

Some protesters said they are happy that the feds may be packing up soon. Others though, and frankly far more people, said that having the feds leave really doesn't matter to them because they say local police and other agencies have been just as brutal in their response to protests.

"It's political now. So it's just going to go on and on and on and on," one protester named Neil said. "And that's what's sad because, as a Black man, it's become less about Black people and about all the other bulls***."

The question is: will this anticipated face-off with those officers, deployed to protect the city's federal courthouse, be their last in Portland?

The announcements about the potential federal officer departures began with a statement issued Wednesday morning by Brown. In short, she asserted the officers would begin leaving Portland Thursday.

“After discussions with the Vice President and administration officials this week, the federal government has agreed to my demand and will withdraw these officers from Portland,” she said. “They will also clean up the Courthouse, removing the graffiti."

Shortly after that, acting Homeland Security Secretary Chad Wolf sent out this tweet:

Wolf later elaborated in a statement. It read, in part, "Oregon State Police will coordinate with Federal Protective Service (FPS) officers to ensure all federal facilities remain protected and secure."

Activists who have been attending and organizing Portland's nightly protests, a routine that began in the wake of George Floyd's death, said Wednesday they were encouraged by the progress.

"We need to have accountability," said Cameron Whitten, co-founder of the Black Resilience Fund. "That’s why it’s so great to know that ... if we are seeing aggression from Oregon State Police or the Portland Police Bureau, I can call my Mayor. I can call the Oregon Governor. I can’t call acting Secretary Chad Wolf. There’s not accountability there."