A group of about 200 people again gathered at the police's East Precinct, where they lit fires and threw large rocks, glass bottles, fireworks and paint at officers. 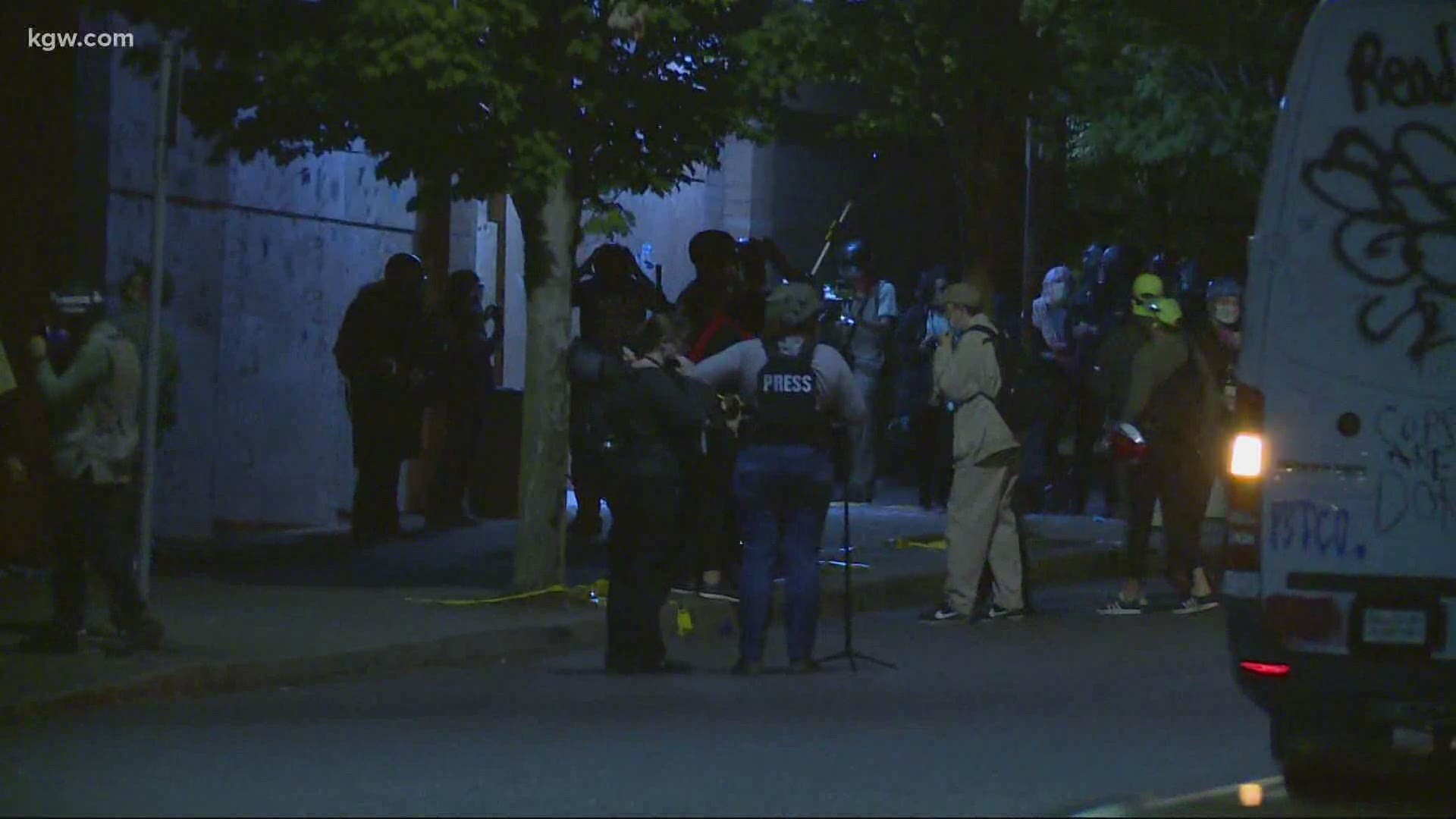 PORTLAND, Ore — Portland police declared an unlawful assembly Thursday night as a group of about 200 people again gathered at the police's East Precinct, where they lit fires and threw large rocks, glass bottles, fireworks and paint at officers.

Police arrested 11 people overnight. They detained one 17-year-old who was eventually released to one of his parents.

After a chaotic night of violence outside the East Precinct on Wednesday, a group called PNW Youth Liberation Front called for "round 2" on Thursday night. Police promptly tweeted that the call for "round 2" would not "go unanswered." They went on to say that the tweet "means there is intent to engage in violent acts like we saw last night."

Police said there were two mostly peaceful protests they did not engage with, one on Southwest 3rd Avenue at Main Street and another on the 4700 block of East Burnside Street that moved to the sidewalk of the Penumbra Kelly Building before moving to the east.

A third group of about 200 people met at Floyd Light City Park in Southeast Portland. That group marched to the East Precinct at about 9:45 p.m.

A handful of people from the neighborhood gathered outside the East Precinct at 9 p.m. to support the police, Zane Sparling reported.

One man in the group said, "I need to make a stand for my neighborhood. I’m not here to bust anyone’s head and I’m certainly not down here to get my head busted."

A few Mill Park locals are at the East Precinct to support Portland police.

I talked to one man who declined to give a name

“I need to make a stand for my neighborhood,” he said. “I’m not here to bust anyone’s head and I’m certainly not down here to get my head busted” pic.twitter.com/L7EBy1h9YC

As the crowd at Floyd Light Park marched to the East Precinct at around 9:45 p.m., police came over the LRAD and announced that they believed the crowd's intent was to burn down the building, Sparling tweeted.

Portland police also tweeted a similar announcement and added that anyone attempting to break in or vandalize the property would be subject to arrest and use of force.

Police said two older adults in the crowd were hit with paint after they tried to stop the group from vandalizing the building with paint.

We believe the intention of the crowd outside East Precinct is to vandalize or attempt to burn down the precinct. If you attempt to break in to or burn East Precinct you will be subject to arrest and the use of force to include crowd control munitions.

A woman with a walker holding a Black Lives Matter sign tried to talk a person out of repeatedly hitting a wood barricade, video showed.

At 9:53 p.m., police declared an unlawful assembly outside the East Precinct. Police asked everyone to leave immediately. Failure to comply could lead to citation, arrest and crowd control agents, police said. Most of the crowd did not leave, according to police.

At 10:10 p.m., a fire was set in a cement trash container right outside the building. An independent reporter at the scene tweeted that the fire was not growing enough to catch plywood against the building on fire.

Police pushed the crowd north and were seen slashing the tires of a snack van, Sparling tweeted.

Police said that as they dispersed the crowd, officers were hit with glass bottles, heavy rocks and other items. Police took several people into custody at this time.

A KGW photographer saw one person taken into custody. She said to our camera, "They're arresting me for assaulting a police officer. I'm a member of the press, I absolutely did not try to assault a police officer."

Portland police said throughout the night, several people in the crowd wearing "press" signs taunted officers, shined lights in their eyes and threw eggs and rocks at officers.

Around 10:40 p.m., police and state troopers were lined up across a road pushing members of the group out of the area, Sergio Olmos tweeted.

Police and state troopers dispersed protestors out of the area pic.twitter.com/iYUlxpzIMD

Around 10:50 p.m., police officers retreated after launching smoke canisters into the crowd. Police said officers were hit with paint, rocks and fireworks during this time. The group made their way back to the East Precinct, Portland Independent Documentarians tweeted.

Police officers have retreated, launching smoke cannisters into the crowd. Protesters are making their way back to the East Precinct now. #PortlandProtests #PDXprotests #BlackLivesMatter pic.twitter.com/01FSRk4BCU

Around midnight, about 100 members of the group came back to the area of Southeast 106th Avenue and Washington Street. Police said one officer was "severely injured" when they were hit with a large rock.

Police said people wearing "press" signs continued to interfere with officers, and police closed Southeast 10th Avenue from Washington Street to Cherry Blossom Street to everyone, including members of the press.

"This lawful order was under the authority of city code 14C.30.010 titled 'authority to restrict access to certain areas,'" police said in a press release.

By 2:30 a.m., the majority of the remaining crowd had left the area.

The following people were arrested:

PHOTOS: Arrests made at Portland protests, night of Aug. 6, 2020

Police said they used crowd control munitions but did not use tear gas.

On Wednesday night, Portland police declared a riot, arrested eight people and used tear gas after a crowd of a couple hundred people gathered outside the East Precinct. Some people in the crowd tried to set the building on fire while officers and others were inside, the mayor said. Others tried to smash the glass doors of the precinct building and threw large, heavy rocks and other items at officers.

Wheeler said what happened Wednesday night "was intended to cause serious injury or death, and it very well could have."

Wheeler said authorities expect similar attacks on buildings across the city in the nights to come. He implored anyone who is a nonviolent protester to avoid police precincts.

"I'm authorizing the PPB [Portland Police Bureau] to do whatever is necessary to hold those individuals accountable," Wheeler said.