Police said a group of a couple hundred tried to smash the glass doors of the East Precinct and threw objects at officers, including "rocks the size of shot puts." 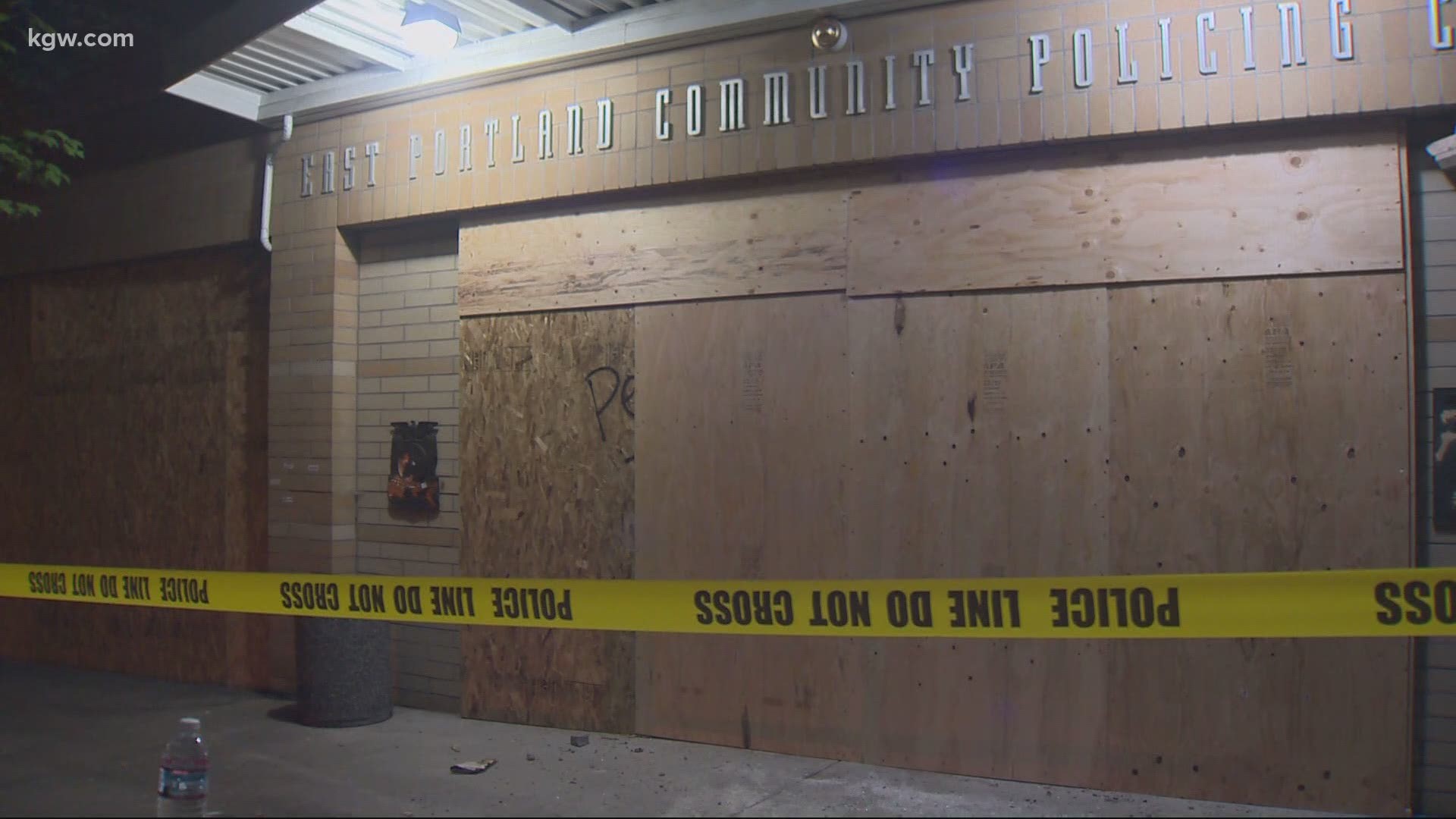 PORTLAND, Ore — Portland police declared a riot and used tear gas Wednesday night outside the East Precinct after a crowd of people tried to smash the glass doors of the precinct building and threw objects at officers.

Police also arrested eight people. Arrest information can be found at the end of the article.

Demonstrators again gathered Wednesday night to protest police brutality and systemic racism. This is the 10th straight week protests have gone on in Portland following the killing of George Floyd.

Protesters were out in two groups Wednesday night. One gathered in downtown Portland outside the Justice Center and the other in Southeast Portland at Floyd Light City Park at Southeast 111th Avenue and Alder Street.

The group in Southeast Portland, which police said grew to a couple hundred people, marched to Portland police's East Precinct. Around 9:30 p.m., police tweeted that "criminal activity" was occurring at the Precinct but did not specify. They asked that peaceful protesters leave.

In a press release sent out early Thursday morning, police said people in the crowd were shining green lasers and other lights at officers. Another person tried to remove the surveillance camera from the front doors of the East Precinct, police said, while others spray painted the camera and the doors of the precinct.

Journalist Garrison Davis reported that some plywood that was covering the front doors had been removed and that a board was being used as a battering ram. Police said others slammed heavy large objects, including large rocks into the glass doors of the East Precinct.

Things seemed to escalate quickly. Police declared an unlawful assembly at 9:45 p.m. At 9:50 p.m., police say people attacking the glass doors of the East Precinct cracked the doors. At 10 p.m. Portland police declared a riot. Protesters were told that they would be subject to crowd control agents if they did not leave.

Even as warnings were announced to protesters, some tried to break through a glass door at the building, Sergio Olmos reported. Police said other people in the crowd threw fireworks and other items at officers.

As police worked to disperse the crowd, around 10:10 p.m. tear gas was used. In the press release sent out by police early Thursday, police said they used tear gas and other crowd control munitions "because of life safety issues created by members in the group."

A rough night at Portland Police Bureau's East Precinct. Police called it a riot around 10pm last night. A security camera was vandalized and fire set at the front door as officers dodged items thrown at them. @KGWNews #PortlandProtests #PortlandRiots pic.twitter.com/cZWhtBD4hg

The crowd reformed about a block away, according to independent journalists at the scene. Police said that while officers were dispersing the crowd, a truck tried to run over several officers.

Around 10:20 p.m., Garrison Davis reported that protesters threw eggs at officers and police responded by charging and tackling people in the crowd.

Near that same time, Portland police tweeted that they believed an "explosive device" had been left outside the East Precinct. They closed the area of Southeast Washington to Southeast Cherry Blossom Street on Southeast 106th Avenue. They also closed Floyd Light Middle School and the East Portland Community Center. Police said Thursday morning that the device was later found not to be an explosive.

Around 10:30 p.m., police rushed into a crowd and made an arrest, according to Sergio Olmos. Police said several people in the crowd threw "heavy rocks the size of shot puts" at police, hitting several officers. At this time, police said they took several people into custody.

At 11:20 p.m., some in the crowd threw balloons full of paint at officers.

Police continued to disperse the crowd for the next two hours, only to have the crowd regroup and return to the area of the East Precinct. By 1:30 a.m., police said most of the crowd had left the area.

Here's the information for the eight arrests made by police:

Police rush into crowd and arrest a protestor pic.twitter.com/ulMX5efeYl

A few eggs were throw at the police, so the officers decide to charge and tackle people in the crowd. #blacklivesmatter       #protest #pdx #Portland #Oregon #BLM #acab #PortlandProtests #PDXprotests #PortlandStrong #portlandpolice pic.twitter.com/tVxTfpyJ5y

Some Protestors tried to break in, but were unable to. There’s cracked glass, debris, and a garbage fire. A riot has been declared pic.twitter.com/KuRaDFdz5P

Speaking of the front door, some of the plywood covering it has been taken down. #blacklivesmatter      #protest #pdx #Portland #Oregon #BLM #acab #PortlandProtests #PDXprotests #PortlandStrong #portlandpolice pic.twitter.com/kkD3n53Un4

Late on Tuesday night, a truck drove through a barricade and into a crowd of people in North Portland. Video showed that a bike got stuck underneath the truck as it sped away, emitting sparks. Police said nobody was hit by the truck.

Later that night, during the early morning hours of Wednesday, a riot was declared outside the Portland Police Association building in North Portland and three people were arrested after protesters broke into the union headquarters and set a fire inside the building.