The funeral for Cowlitz County Deputy Justin DeRosier, 29, was packed with several thousand mourners, including hundreds of law enforcement officers who traveled from around the Pacific Northwest to honor him. 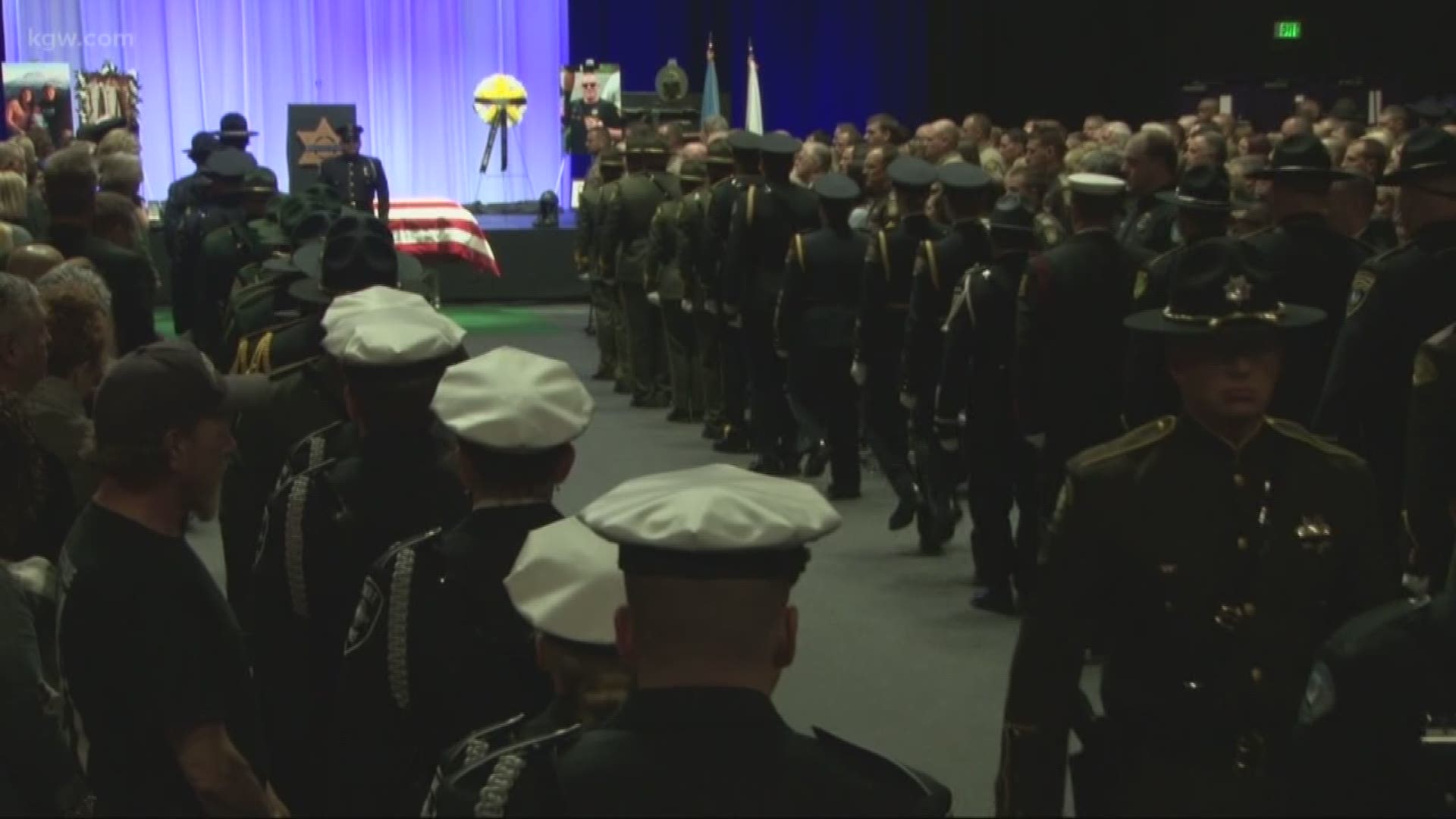 PORTLAND, Ore — A Washington state sheriff's deputy who was fatally shot by a suspect was remembered Wednesday as an extraordinary young man who was destined for greatness in a profession he had dreamed of joining since childhood.

The funeral for Cowlitz County Deputy Justin DeRosier, 29, was packed with several thousand mourners, including hundreds of law enforcement officers who traveled from around the Pacific Northwest to honor him.

Due to the size of the crowd, the ceremony was held at the University of Portland, across the Columbia River from his home in Washington state.

DeRosier was shot April 13 while responding to a call about a disabled motorhome blocking a road. He was able to take cover and call for assistance but died in surgery a short time later in Vancouver, Washington.

Sheriff Brett Myers of Whitman County, Washington, where DeRosier began his law enforcement career in an academy for reserve deputies, remembered him as someone who "had too many questions, always had an answer for everything and sometimes didn't know his place in the pecking order."

Soon, though, Myers came to appreciate DeRosier's energy and nicknamed him "Boy Wonder" before hiring him onto his force, where DeRosier excelled and inspired others with his attitude.

"Justin was an extraordinary person who did extraordinary things. Justin was one of a kind, he was larger than life and just plain fun to be around," Myers said. "He never, ever complained. For him everything seemed to be an opportunity to do more, to learn more and be more."

Woodland Police Chief James Kelly, who met DeRosier when he coached him in T-ball at age 5, recalled delivering the bad news to DeRosier's parents the night he was shot.

"The drive from the scene to your house was the longest drive of my life. How was I going to tell my friends their son had been shot? I had no words," Kelly said to DeRosier's parents as they sat in the front row.

A montage of photos and videos of DeRosier's life ended with images of him holding his now 5-month-old daughter, Lily, who attended the service in a fluffy white dress. In the last video, DeRosier bounces Lily on his stomach and coos at her, eliciting a smile and a gurgle as he proudly says, "Look at her face."

The suspect in DeRosier's death, Brian Butts, was fatally shot by police in Kelso, Washington, the next day when authorities say he ran out of the woods holding a handgun.

Butts had methamphetamine worth up to $3,000 when he was killed, authorities said earlier this week. They are examining the handgun to determine if it was the same one that fired the shot that killed DeRosier.

RELATED: Suspect in killing of Cowlitz County deputy is half brother of man who killed Rainier police chief

"Justin did everything right that night, but heaven called for that 'Boy Wonder' — that extraordinary hero — to answer a new call home," Myers said.

"I am just sorry his calling came sooner than expected."