The suspect was identified as 33-year-old Brian Butts, of Kelso. He is related to Daniel Butts, who killed Rainier Police Chief Ralph Painter in January 2011. 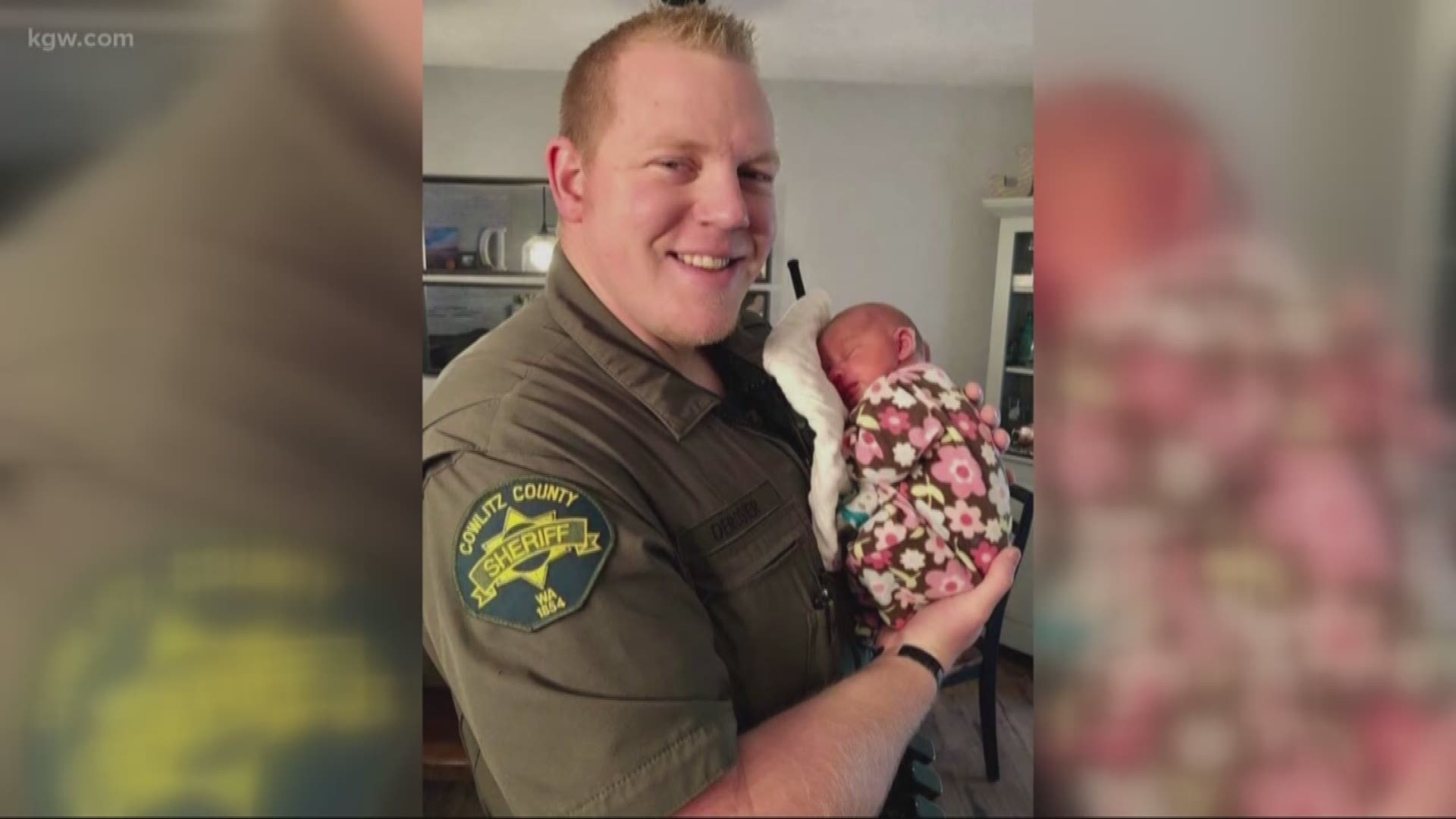 KALAMA, Washington — Cowlitz County Sheriff's Deputy Justin DeRosier was shot and killed by a man after responding to a complaint about a motor home blocking a driveway.

Some 21 hours later, two police officers engaged a man believed to have shot DeRosier. The suspect showed a gun and was shot dead.

9:29 p.m. Saturday — Deputy Justin DeRosier is dispatched to a complaint about a motor home blocking a driveway near the 100 block of Fallert Road, about 3 miles east of Interstate 5 along Kalama River Road.

10:11 p.m. Saturday -- DeRosier arrives and gets out of his patrol car to check out a motor home.

10:13 p.m. Saturday -- DeRosier broadcasts shots have been fired and he is hit.

A dispatcher broadcasts, "Copy, he's at 100 Fallart Road." A number of officers start to race to the scene. There is very little information other than he's been shot. Minutes go by.

The dispatcher then broadcasts, "No, we don't know anything. He just got on the radio and said he's been shot. Now he's not answering us. He was on a parking complaint."

DeRosier makes it back to his patrol vehicle and retrieves his rifle. He was kneeling at the rear of the vehicle when two Kalama police officers arrived.

DeRosier is taken to a nearby ambulance which goes to Haydu Park where he is put aboard a Lifeflight helicopter and taken to PeaceHealth Southwest Medical Center in Vancouver.

The deputy's wife and parents arrive at the hospital but are unable to see him before he dies in surgery shortly after midnight.

Already underway is a massive dragnet involving two SWAT squads and at least a half dozen other police agencies trying the find the suspect.

2 a.m. Sunday — Investigators contact a man named Matthew Veatch, who was walking down Modrow Road. During questioning, police determine there is information to detain him. He is arrested for rendering criminal assistance.

Deputies serve a search warrant at Veatch's home in the 300 block of Fallert Road, near where DeRosier was shot. Deputies speak with Matthew's brother, Michael Veatch, and their mother, Cheryl Veatch. Michael is arrested on a Department of Corrections warrant.

Throughout the day, officers from multiple agencies search the area for Butts.

2 p.m. Sunday — Police hold a press conference, announcing they have interviewed persons of interest and are processing the crime scene area.

7 p.m. Sunday — Shortly after 7 p.m., a neighbor sees a man walking down Spencer Creek Road with muddy pants, a satchel and hoodie pulled over his head. He makes no eye contact, which was odd because people typically wave in the area. The neighbor calls police.

Another neighbor's call to 911 identifies Butts by name.

Two nearby Kelso police officers respond to the calls. They see Butts, who displays a gun. He is shot dead.

The neighbor says it all happened within five minutes of him making the initial call to 911.

6:30 p.m. Monday -- Police and firefighters bring DeRosier from Vancouver to Kelso in a procession. Firefighters, police and onlookers lined roads and freeway overpasses to honor DeRosier.

Small town of Kalama, Washington rocked by killing of deputy