By the numbers: A look at Oregon’s recent COVID-19 spike 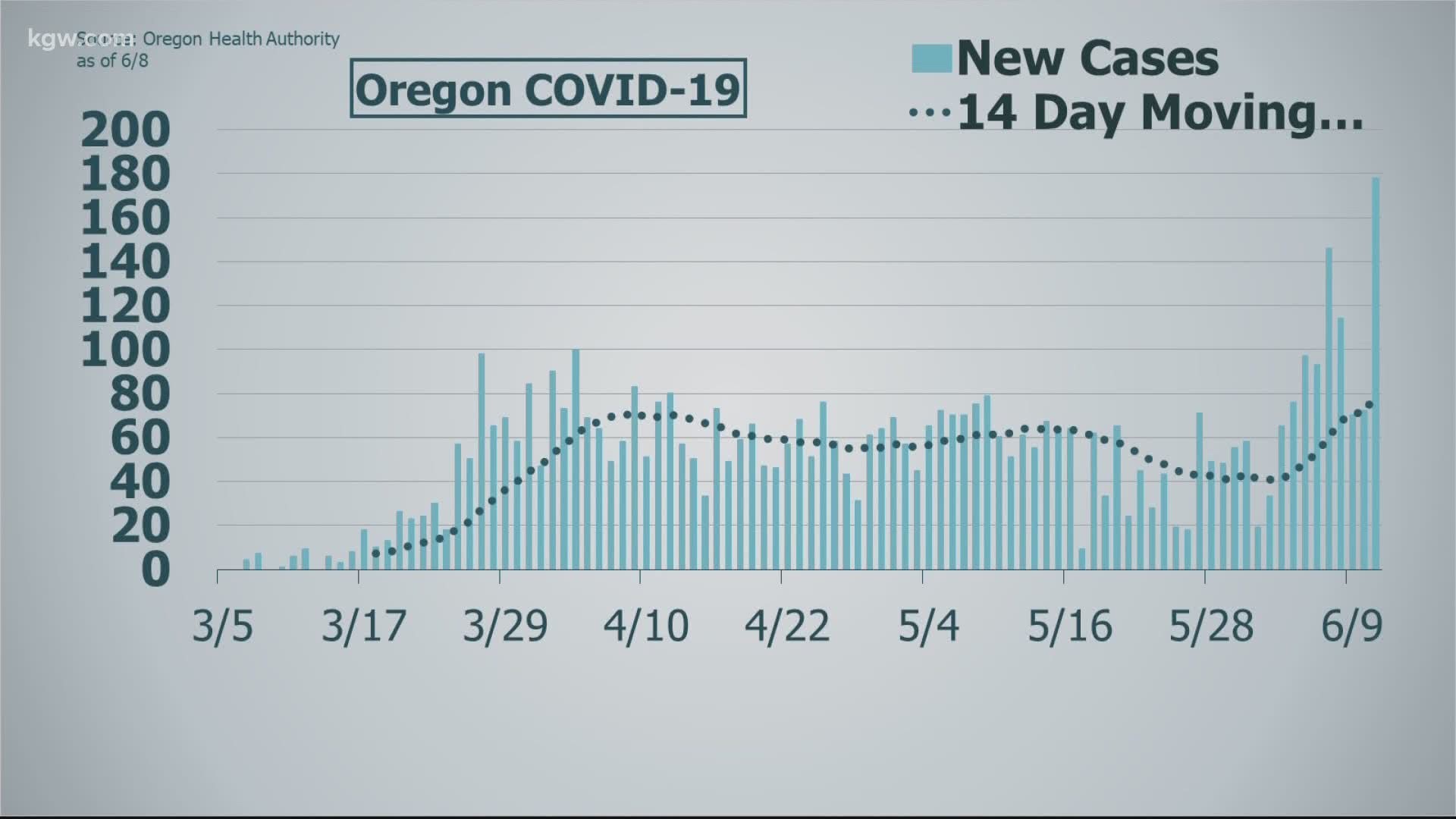 PORTLAND, Ore. — Prior to June 7, there was only one day when Oregon reported at least 100 new COVID-19 cases. That was on April 4, less than two weeks after Gov. Kate Brown issued a statewide stay-home order. But over the last five days, the Oregon Health Authority has reported at least 100 new coronavirus cases three times, including 178 on Thursday, the most reported in a single day during the pandemic.

The OHA said the record number of new known cases can be attributed to the partial reopening of most of the state, more widespread testing, increased contact tracing, active monitoring of close contacts of cases and workplace outbreaks. Most recently, an outbreak linked to Pacific Seafood in Newport led to 127 people getting infected. State health officials have also repeatedly said that despite the recent spike in cases, Oregon’s overall rate of infection remains among the lowest in the United States.

Still, the uptick in cases has the governor and state health officials concerned. So much so that Gov. Brown on Thursday said all pending applications for counties to move into Phase 1 or Phase 2 of the state’s reopening plan have been put on hold for a week, to give time to have a better understanding of the recent spike.

“This one-week pause will give public health experts time to assess what factors are driving the spread of the virus and determine if we need to adjust our approach to reopening. I will work with doctors and public health experts to determine whether to lift this pause or extend it or make other adjustments,” Gov. Brown said in a statement Thursday night.

That means Multnomah County, the most densely populated in Oregon, will have to wait at least until June 19 before potentially entering Phase 1. The governor’s decision also means Hood River, Marion and Polk counties must wait at least another week before moving into Phase 2 of reopening.

The governor listed several areas of concern public health officials have at this point of the pandemic:

The spike in known cases is not just limited to the past week. In the OHA’s most recent weekly report, which was released Wednesday, officials said there were 620 new COVID-19 cases during the week of June 1 to June 7, a 75% increase from the previous week of 353 cases, which was an 18% increase from the week prior. That 75% increase came as the total number of tests only increased by nearly 3%, from 18,215 to 18,721. The percentage of positive tests also jumped from 1.9% to 3%.

While the number of cases have surged to peak levels, the OHA noted hospitalizations and deaths were far below the peaks seen earlier in the pandemic. During the week of June 1 to June 7, 10 coronavirus-related deaths were reported.

Officials are also monitoring Oregon’s progress on the pandemic through six public health indicators, which are assessed at statewide and county levels. Here’s a breakdown of how the state and the counties whose reopening applications have been put on hold are faring. All data is from the OHA.

1.) Percentage of emergency department visits for COVID-like illness is less than 1.5%, which is the normal average for flu-like illness when it’s not flu season.

2.) Downward trend in percent of tests that are positive in the last seven days. The most recent data is from the week of June 1 to June 7.

3.) Percent increase in new cases in the last seven days should be no more than 5%. The most recent data is from the week of June 1 to June 7.

4.) Percent of cases not traced to a known source in the last seven days should be below 30%. The most recent data is from the week of June 1 to June 7.

5.) Trend in COVID-19 hospitalizations over the last 14 days should be downward. The most recent data is from May 25 to June 7.

6.) Percent of cases in the last seven days with follow up within 24 hours should be 95% or more. The most recent data is from the week of June 1 to June 7.

As Oregonians wait another week for further reopening, and the economic benefits that come with it, these are some of the data points health officials and the governor will likely be weighing over during that time. Gov. Brown plans to have a press conference at 9 a.m. Friday. It will be livestreamed on KGW.com and on KGW's YouTube, Facebook and Twitter pages.