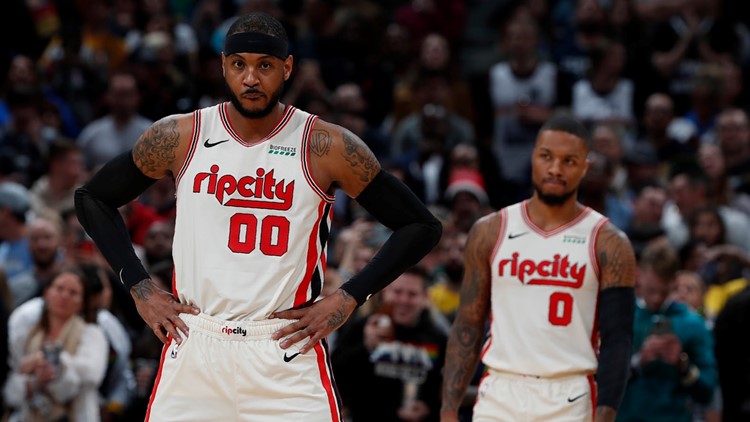 In an article spotlighting 16 players who could be traded before the deadline, The Athletic's Sam Amick mentioned Portland once, reporting that people close to the Trail Blazers doubt Love will ever play for Portland.

"There is serious skepticism from key people close to the Blazers that Love will ever find his way to his home region team in the Northwest," Amick wrote.

Brian Windhorst of ESPN followed that with some intel of his own, saying on the Hoop Collective podcast that he's been told that the Blazers are relaying the message that they're "going to stand pat" at the deadline.

"Right now, I think the message that the Blazers are putting out there is that they're going to stand pat. Doesn't mean that won't change in three weeks, but the word that I've heard is the position that they're saying is we're going to get Nurkic back and see what we can do," Windhorst said. "Now I don't know if that means they won't do anything, or if it means they just won't do a big deal."

Windhorst said that the Blazers are focused on the return of Jusuf Nurkic more than potential trades.

"They think they'll be a much improved team, because no move that they could make would be as impactful as getting back this guy who is their road grader, screen setter, and he was playing SO WELL before he got hurt," Windhorst said.

The trade deadline is Feb. 6.

LISTEN: What will the Blazers do at the NBA trade deadline?

Have a question you'd like us to answer on the podcast? Email us here

Here’s a look at where the Blazers fall in the latest batch of NBA power rankings:

The Blazers are 2-8 in their past 10 games. They averaged a defensive rating of 116.4 in those games, which would rank as the worst in the league -- yes, worse than the Wizards' -- over the course of the season. Their starting five was torched (110.1 defensive rating) in those 10 games, and specifically, any lineup Carmelo Anthony is in is giving up heaps of points (115.8 individual defensive rating). Melo is still scoring, but the other side of the ball is beginning to catch up. – Royce Young

Sports Illustrated: Blazers rank No. 19 (down 3)

Portland has lost eight of its last ten, failing to capitalize on a uniquely light back end of the Western Conference playoff chase. What’s the culprit behind their struggles? The Blazers can’t really stop anyone. They’re allowing 116.4 points per 100 possessions over their last ten games (better than only Denver) and only two teams crash the defensive glass at a worse rate. Damian Lillard has enough offensive weapons around him. Portland misses Jusuf Nurkic in a big way. – Michael Shapiro

Inconsistency comes with bad defense and a dependence on jump shots. The Blazers rank last defensively (118 points allowed per 100 possessions) since Christmas and are one of three teams that rank in the bottom 10 in both free throw rate (24 attempts per 100 shots from the field - 23rd) and the percentage of their shots that have come in the paint (45% -- 27th).

After they host the Hornets on Monday, the Blazers will play 11 of their next 13 games against teams currently over .500, with one of the two exceptions being a game against the Spurs, who have won 10 of their last 17. – John Schuhmann

Positive Takeaway: Carmelo Anthony has been a really nice story for the Trail Blazers and the NBA. Amidst all of the disappointment for a Portland Trail Blazers team that made the conference finals last year, their rolling of the dice to bring back Melo to the NBA has been a success story. He’s scoring more efficiently than he did the previous two seasons. He’s showing he’s not a net negative on the court, although that’s tough to see with how bad this Blazers team has been recently. He’s proving he belongs in the NBA. Redemption stories are fun, and maybe the Blazers can have their own team redemption story in the second half of the season.

Negative question: Is this team any good? We know it has good components and we know individually those guys can do some pretty intriguing things. But the collective unit getting by without Jusuf Nurkic, Zach Collins and Rodney Hood is a disaster at the moment. We’re just waiting for Damian Lillard to be a superhero and carry them into the eight seed out West. Instead, they recently got smoked by a bad Timberwolves team without Karl-Anthony Towns playing. I don’t know what rock bottom looks like for this team, but the status quo of this season doesn’t look like it’s good enough even in a down year for the No. 8 seed in the West. – Zach Harper

Carmelo Anthony's game-winner in Toronto was spoiled by a disastrous Blazers performance in a blowout loss to the Timberwolves two nights later. Portland has now lost eight of its last 10 games as it remains logjammed in the race for the eighth and final playoff spot out West. CJ McCollum is mired in a mini-slump, shooting 36 percent from the field in his last three games. – Colin Ward-Henninger