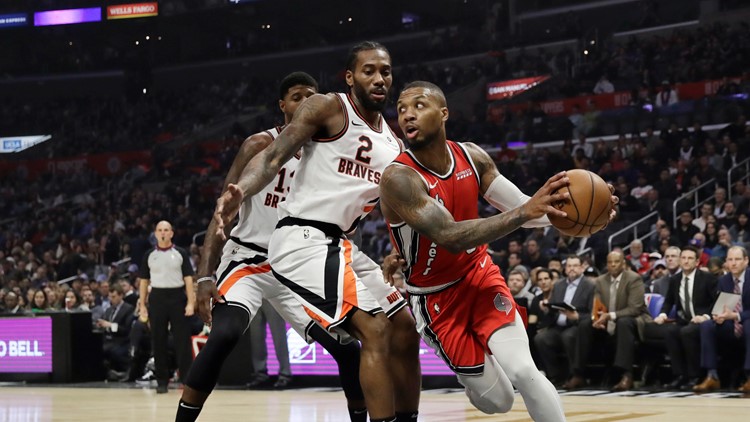 NBA power rankings: Depleted Blazers off to worst start since 2016

PORTLAND, Ore. — The Portland Trail Blazers are 14-19, their worst record this late in the season since 2016.

That season, Portland continued to struggle until March. The Blazers lost to the Detroit Pistons on Feb. 28, 2017 to fall to a season-worst 11 games under .500. They rallied by winning 17 of their final 23 games to finish 41-41 and squeak into the playoffs.

The 2016-17 season was saved by a major acquisition at the trade deadline, when the Blazers traded Mason Plumlee for Jusuf Nurkic. Nurkic Fever ensued, Portland went on a roll, and the rest is history.

The Blazers will probably get another infusion of Nurk Fever around the same time this season. Whether that leads to a similar late-season surge will be a story to follow a couple months from now.

Portland has some winnable games coming up, with tonight's game against the Phoenix Suns (12-20), and then two road games, Wednesday at the New York Knicks (9-24) and Friday at the Washington Wizards (9-22).

Here's a look at where the Blazers land in this week's NBA power rankings:

What they wrote: After a four-game win streak against an easy part of their schedule, Portland was knocked back down to earth a bit. It should have beaten New Orleans at home. It had a decent shot at beating Utah in Salt Lake City, but then LeBron and the Lakers came to town and just had too much firepower for the Blazers. It’s hard to get a read on them, considering the ebbs and flow of the season. They need to beat Phoenix at home Monday before their five-game road trip. – Zach Harper

What they wrote: The Trail Blazers missed a chance to run their win streak to five games by losing to the Pelicans on Monday, then followed that up with losses to the Jazz and Lakers. Anfernee Simons, who came into the season with quite a bit of hype, has played better of late, averaging 12.3 points on 40 percent 3-point shooting over the last three games. Portland's defense has been a problem all season, and it had trouble getting stops again this week. – Colin Ward-Henninger

What they wrote: A four-game winning streak gets replaced by a three-game losing streak last week, summing up much of the season for the Blazers. But it could turn again for them, with winnable games ahead this week against the Suns, Knicks and Wizards. The games lost to injury for Portland is the primary culprit for its consistency issues. Also, the Blazers aren't as good defensively this season (they were pretty average anyway last season) and they have taken a considerable step back offensively. If it's going to turn around, Damian Lillard might need to summon the playoff version of himself for the next, say, 49 games. – Royce Young

What they wrote: The Blazers have been on a week-by-week roller coaster since they added Carmelo Anthony six weeks ago. A 4-0 Week 9 has been followed by an 0-3 Week 10, and while schedule strength has a lot to do with the swing, the current losing streak began with a loss at home to New Orleans in which the Blazers shot 4-for-29 from 3-point range. They lost another guy to injury on Saturday when Skal Labissiere left in the first quarter of their loss to the Lakers with a left knee injury. Labissiere (whose status going forward is still unknown) was only a spot starter against a big frontline, but he's provided valuable energy off the bench. The Blazers have been at their best on defense (106.4 points allowed per 100 possessions) and on the glass (rebounding percentage of 50.5%) with Labissiere on the floor, and their best two-man combination in regard to on-court point differential per 100 possessions (plus-7.7) has been Labissiere and Damian Lillard. Amazingly, with the three-game losing streak, the Blazers are still in eighth place in the West. But they have to take advantage of the next three games, because their game in Miami on Sunday is the start of a stretch where they're playing 14 of 18 against teams that currently have winning records. – John Schuhmann

What they wrote: Carmelo Anthony has been solid with the Blazers through 17 games, averaging 16.2 points and 39.7% from three. But Thursday’s loss to the Jazz was undoubtedly frustrating. Damian Lillard led Portland with 34 points on the evening, only to see Portland’s pivotal last-minute possession go to Anthony. The 10-time All-Star isolated against former Defensive Player of the Year Rudy Gobert, then had his shot blocked as the Jazz regained possession. The worst of Anthony emerged late in Utah. – Michael Shapiro