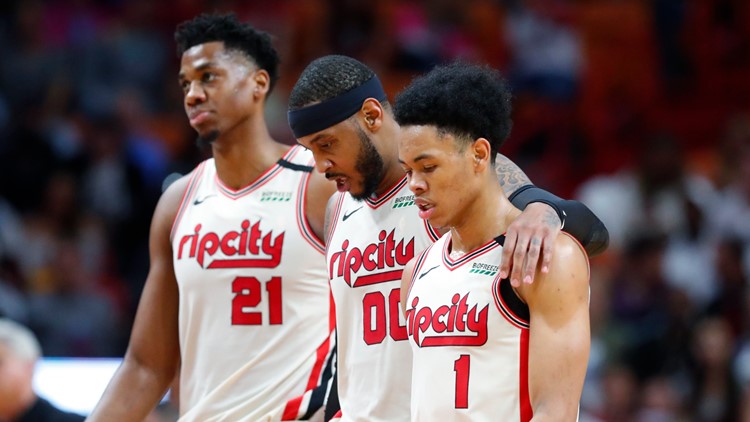 Photo by: AP
Portland Trail Blazers guard Anfernee Simons (1), forward Carmelo Anthony (00) and center Hassan Whiteside (21) head to the bench during a timeout in the second half of an NBA basketball game against the Miami Heat, Sunday, Jan. 5, 2020, in Miami. The Heat defeated the Trail Blazers 122-111. (AP Photo/Wilfredo Lee)

PORTLAND, Ore. — After a week in which the Blazers lost to the Suns and Knicks, it wasn't a surprise to see the team take a hit in this week's NBA power rankings.

It doesn't get easier for Portland. The Blazers play 14 times before the Feb. 6 trade deadline and FiveThirtyEight projects Portland to lose all but three of those games. Considering how the Blazers have been playing, those projections seem on target if not optimistic.

Even with the expected return of Jusuf Nurkic and the possibility of a shiny new acquisition before the trade deadline, if the Blazers are 15 games under .500 in early February, is another late-season surge to qualify for the playoffs realistic? Or is Portland falling into the lottery for the first time since the 2012-13 season the more likely scenario?

The teams at the bottom of the West playoff race aren't good this season, which will make it easier for a struggling team like the Blazers to qualify for the playoffs. Currently, the team occupying the eighth and final playoff spot in the West is the San Antonio Spurs, who are six games under .500. The Blazers are just a half-game behind the Spurs for eighth place in the West. But that doesn't change the fact that Portland is seven games under .500, which means that even though they're in playoff contention, they’re also just three games ahead of the Washington Wizards, who own the fifth-worst record in the NBA.

Here’s a look at where the Blazers fall in the latest batch of NBA power rankings:

Sports Illustrated: Blazers rank No. 16 (down 1)

What they wrote: Carmelo Anthony has been efficient from three from Portland, but the Blazers still lag behind the top eight seeds in the West. They have their scuffling defense to blame. Portland has the NBA’s No. 28 defense since Dec. 1, and they rank No. 25 in defensive rebounding rate. Damian Lillard’s scoring binges are falling short in a stacked Western Conference. – Michael Shapiro

What they wrote: At some point, something has to give for the Blazers. They've lost six of their past seven games and are clearly a significant notch below playoff-caliber teams. In this latest seven-game slump, they're allowing 118.8 points per 100 possessions, the second-worst mark in the league in that span. There was always a worry about the trade-off the Blazers were willing to rationalize when they signed Carmelo Anthony. But it appears the defensive chickens are coming home to roost right now. Just asking Damian Lillard to be a superhero isn't working, either: He has scored 30-plus in five of those seven games. – Royce Young

What they wrote: Given the strength of their January schedule, the Blazers needed to get some wins before they made to Miami this past weekend. They took care of business in Washington on Friday, with Hassan Whiteside picking up the first 20/20 of 2020, but not before blowing a 19-point lead to Phoenix and getting trounced at Madison Square Garden (despite a vintage performance from Carmelo Anthony). Damian Lillard has scored more than 30 points in five of their last six games, and the Blazers have generally been fine offensively, even without CJ McCollum (illness) on Sunday. But only the Nuggets have been worse defensively since Christmas and the Heat (who were without Jimmy Butler) had their second most efficient game of the season (122 points on 97 possessions) to drop Portland back into ninth place in the West. – John Schuhmann

What they wrote: Talking to a few executives and scouts around the NBA, it feels like the Blazers’ backcourt of Damian Lillard and CJ McCollum is being doubted now more than ever. Part of this comes from this team not being able to defend anybody. It was manageable when they were paired with guys like Maurice Harkless, Al-Farouq Aminu, and Jusuf Nurkic. Instead, they have Carmelo Anthony (who has been decent defensively compared to his past), Rodney Hood (before he got injured), and Hassan Whiteside (not a good defender despite blocking shots), and it looks too easy to score against them. Some have started to wonder if the Blazers might need to break up the backcourt, just to even out the roster and give them more balance. Maybe that’s an overreaction to a tough half of the season, but it’s something the Blazers need to explore even if they don’t make a move so drastic. Nurkic will be back soon-ish, but that probably doesn’t get him back to full effectiveness until next season. Is one season in the wrong direction a need to panic right after a Western Conference Finals appearance? Probably not, but there is still concern about the future in Portland. – Zach Harper

What they wrote: After a tough loss to the Suns, the Blazers were absolutely blown off the court by the Knicks in one of their worst losses of the season. They avoided the same fate against the Wizards before losing to the Heat in a game without Jimmy Butler and CJ McCollum. They've gotten great production from Damian Lillard, McCollum and Hassan Whiteside all season, but their 119 defensive rating this week isn't going to result in many wins. – Colin Ward-Henninger

PODCAST: Do the Blazers have the best backcourt duo in the NBA?