Bust of York ripped from base, partially shattered on Mt. Tabor

The bust of York honors the only Black man to have been in the Lewis and Clark expedition. York's journals show he was an invaluable member of the journey. 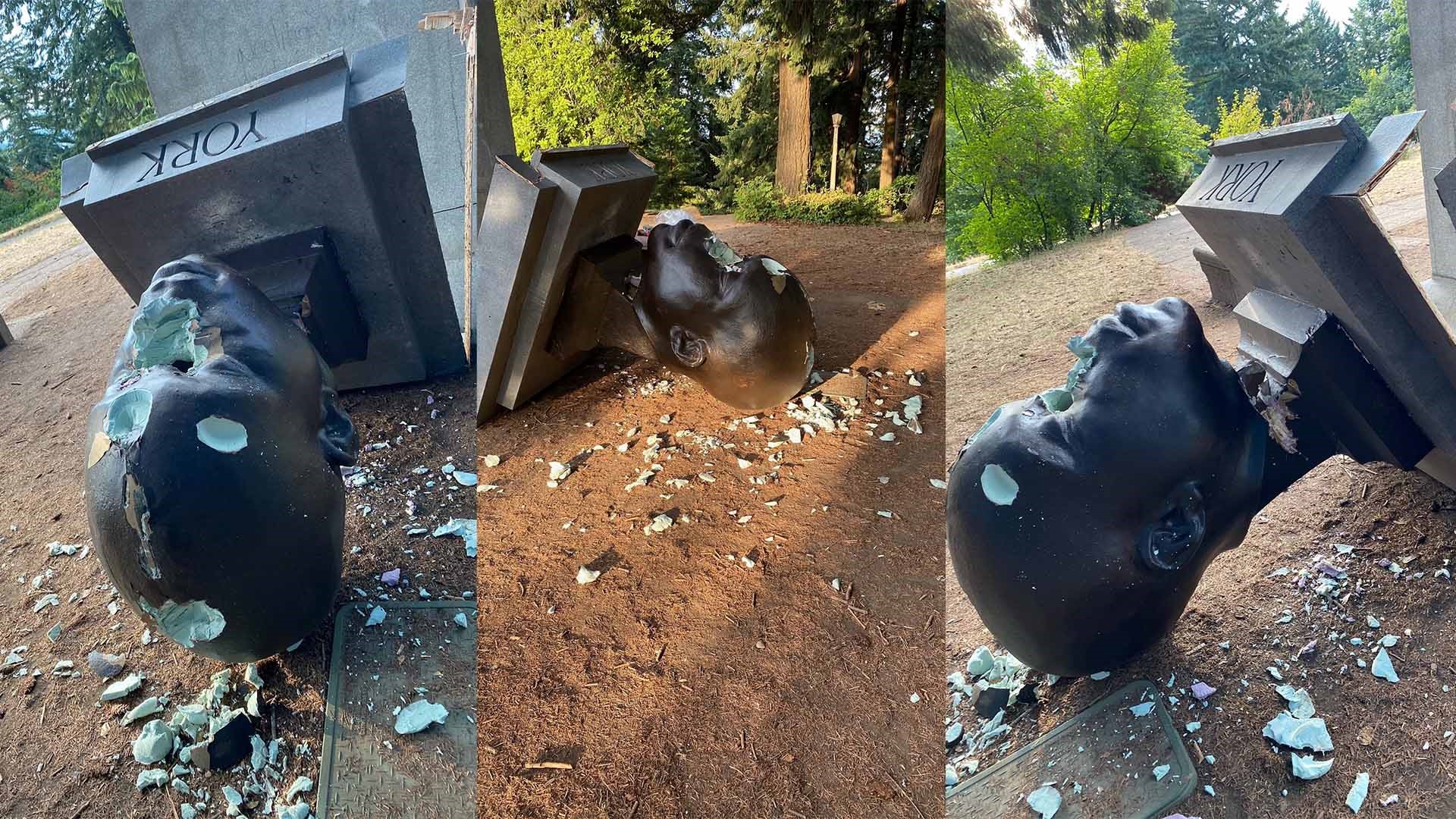 PORTLAND, Ore. — The short and mysterious life of the bust of York, the only Black member of the Lewis and Clark expedition, may have come to an end.

Sometime during the night of July 27 and the morning of July 28, the bust of York was torn from its base on Mt. Tabor, according to Portland Parks and Recreation (PP&R). Someone in the park notified a maintenance worker of the damage. The bust was removed just after 7 a.m. on July 28.

Photos shared with KGW show the bust shattered, with a missing nose and pieces scattered on the ground.

The statue had suddenly appeared in February 2021 in place of a toppled statue of Harvey Scott, one of several statues toppled during racial justice and reform protests in the city during summer 2020. Scott was a known conservative who opposed the women’s suffrage movement that his sister, Abigail Scott Duniway was a pivotal member of.

The bust of York was defaced more than once in its time at the top of Mt. Tabor. Most of the vandalism centered around spray-painted messages surrounding racial justice on the base of the statue.

However, in June, a 43-year-old white woman was cited for second-degree criminal mischief, abuse of venerated objects, unlawful applying of graffiti and vandalism for painting purple spray paint all over the base. A passerby photographed and recorded the woman, Jeanette Grode, as she defaced the monument.

Had an interesting encounter during a bike ride this morning. A person was defacing the Bust of York statue on the top of Mt Tabor. pic.twitter.com/LbLYut9RGr

But the statue was cleaned and stood in its former glory shortly after, until its July toppling.

PP&R director Adena Long said via email, "The York bust appeared in Mt. Tabor park in February as a happy surprise to Portland Parks & Recreation (PP&R). Unfortunately, the numerous racist responses to the memorial of a Black man forced to participate in the Corps of Discovery Expedition have not been a surprise.”

York is remembered as an enslaved member of the Lewis and Clark Expedition Corps of Discovery. He had been Clark’s servant and his father was a slave of Clark’s father. York was the first recorded Black man and African American to cross North America and reach the Pacific Coast and his journals, now historical artifacts, show he was an invaluable member of the expedition.

While the most recent vandalism against the statue may bring it to an early end, the York bust was not built to stay in the park permanently. It was expected to stay around for as long as it could if it did not pose a threat to parkgoers. However, the bust is made of wood and urethane, not bronze, so it would eventually break down due to the weather.

RELATED: The bust of York on Mount Tabor was never meant to stay permanently

“The latest act of vandalism is incredibly disappointing for me, and I'm sure the majority of Portlanders will miss seeing York at the top of Mt. Tabor,” Long continued. “Parks staff will inspect the installment after this latest incident to see if it can be salvaged."