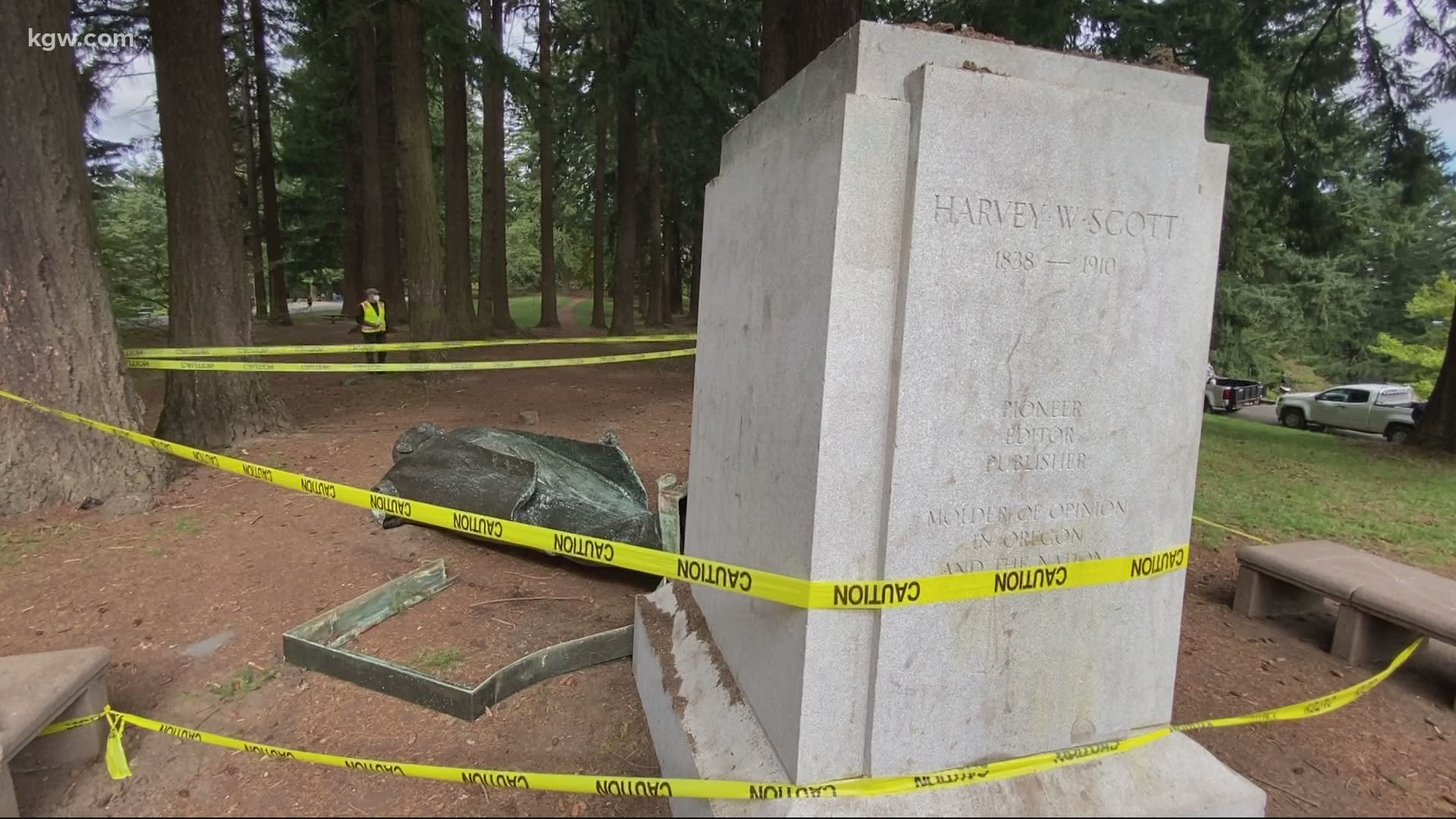 PORTLAND, Ore. — For 87 years, a statue of Harvey Scott stood at the top of Mt. Tabor facing south, his arm outstretched pointing toward Portland.

Sometime overnight Monday into Tuesday, the statue of Harvey Scott was torn down and destroyed by a person or persons. His arm was broken off, found a few yards away. Park rangers said the arm weighed over 100 pounds and took two people to carry it to a truck nearby.

Scott was a well-known figure in Portland's early history. He was a longtime editor and part-time owner of The Oregonian newspaper. According to the Oregon Historical Society's website, Scott was a vocal conservative, using the large audience of the paper to voice his opposition to "many of the social reforms of his time including free high schools, state supported schools of higher education, prohibition, woman's suffrage, organized labor, and Oregon's system of direct primary, initiative, referendum, and recall."

"Harvey's positions back then were often probably more conservative than many people. He was not a supporter for many years of women's suffrage, of giving women the right to vote," said Kerry Tymchuk, executive director of the Oregon Historical Society.

Scott's views about a woman's right to vote differed greatly from his own sister, Abigail Scott Duniway, a champion for women's rights in Oregon. She was Oregon's version of Susan B. Anthony.

Credit: KGW
Abigail Scott Duniway on the left, next to Susan B. Anthony on the right in 1905

On Tuesday morning, many were seeing the torn down statue for the first time, some with little love lost for Scott.

"We've lived in the neighborhood for 20 years and always pondered why his statue was here," said Lara DiLiberti. "He's a sexist old white dude who doesn't represent the values of Portland and so I am not sorry that the statue's down."

Statue of Harvey Scott torn down in Mt. Tabor Park.

Scott died in 1910, was a longtime editor of the Oregonian and also brother of women’s rights advocate Abigail Scott Duniway.

Since June, vandals have torn down five statues in Portland. George Washington and Thomas Jefferson's statues were the first to go in June, then in October, Abraham Lincoln and Theodore Roosevelt were torn down.

"I agree there are some statues that probably need to be reconsidered and statues that we should see if they're sending an appropriate message," park visitor Wendy Hillman said. "But vandalism taking them down makes me really uncomfortable because it doesn't feel like it's representing everybody's ideals or thoughts."

The City of Portland owns the statue and It is maintained by the Regional Arts & Culture Council (RACC). Scott's statue will be removed and stored, but what will happen to it, or possibly replace it, is unknown at this time, a park's spokesperson said.

"My son and I have had that conversation," Hillman said, "He feels Harvey Scott should be replaced by Abigail. I don't disagree with that."

Around the Portland area, you can find a couple other references that bear Scott's name. Mt. Scott in Happy Valley is named after him as well as Scott Elementary in Northeast Portland. The state of Oregon lists Scott as a notable Oregonian on the Secretary of State's website.

RELATED: VERIFY: Why Lincoln and Roosevelt's statues were targeted by protesters