As police call for end to encampment at 'Red House,' activists say they'll continue to fight for family

Protesters said they’re fighting to protect yet another family of color from losing their home. 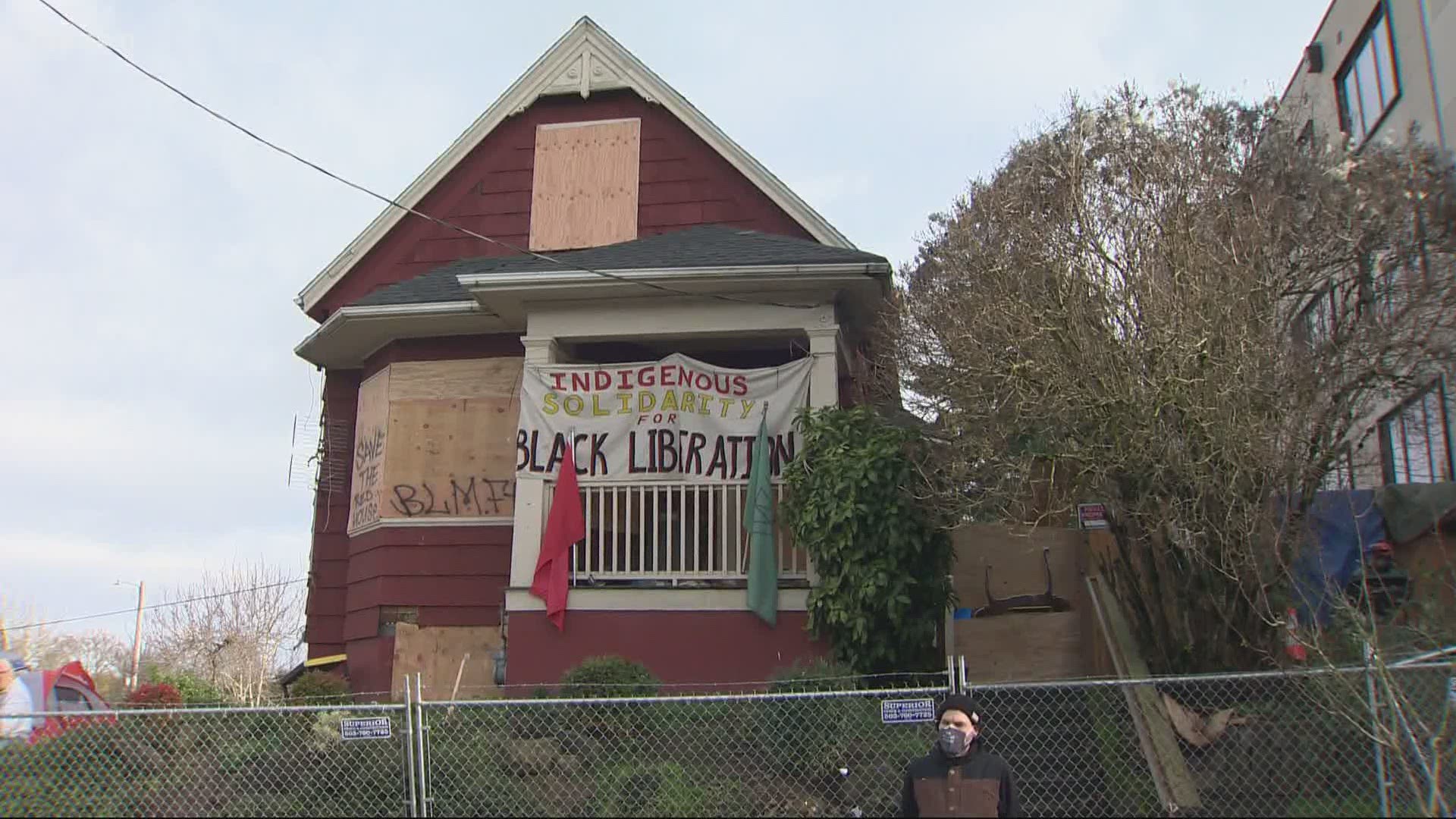 PORTLAND, Ore. — A home in North Portland known as the “Red House on Mississippi” has drawn the attention of city leaders, police and local activists.

The family who lives in the home lost it to foreclosure two years ago and refused to leave. Recently, police tried to make them leave. In response, protesters set up fences and camps around the property, shut down Mississippi Avenue and have thrown rocks, bottles and balloons at anyone with a badge. In at least one case, protesters threatened and injured journalists who got too close.

Can't stop thinking about what happened to @GenevieveReaume & @RPeavyhouse yesterday.

No journalist should EVER be injured/intimidated for doing their jobs.

Here's what happened today when I asked an activist at the Red House protest to condemn it. Because there is no excuse. pic.twitter.com/hsKfPQRrAs

Some Portland officials, including Mayor Ted Wheeler, said the behavior of protesters is way over the line and they’ve got to go, one way or another.

RELATED: 'There will be no autonomous zone in Portland' | Wheeler says encampment at 'Red House' must end

On Thursday, Wheeler said in a press release that "the City of Portland is actively working across bureaus and with partners to resolve the situation on North Mississippi Avenue. We continue to actively monitor the situation and will provide updates as appropriate".

Protesters said they’re fighting to protect yet another family of color from losing their home.

Outrage over the family’s eviction has been brewing for months. A lot of it stemming from a visit by Multnomah County Sheriff’s deputies in September. That’s when the Kinneys, who live in the “Red House,” said they were ordered to leave.

“All I hear is banging on my door,” Julie Metcalf Kinney recalled from that day. “Then, I see there’s nine sheriffs standing outside and next thing I know, they’re kicking in the door with guns drawn.”

“This is a devastating action that was taken... the tactics that are used to do this is beyond despicable.”

-Julie Metcalf Kinney talking about @MultCoSO deputies entering her home in September to try & evict the family. The eviction was ordered by a judge. pic.twitter.com/ClQEFNJSVV

Metcalf Kinney made the comment during a press conference Wednesday. A lot of the speeches at the press conference were tied to how the situation got to where it stands today. William X Nietzche, a member of the Kinney family, was one of the people who spoke.

“My parents were preyed upon by some of the same predatory practices that led to the 2008 financial crash,” Nietzche said.

According to a website set up by activists, the Kinneys’ troubles began in the early 2000s. That’s when one of their sons, William, went to prison for causing a deadly car crash. The family took out a loan against their home to pay legal fees. But interest rates were high, and the family said even after taking out a second loan to pay the first, the debt crushed them.

Over the next decade-plus, they said both loans were sold between big banks multiple times. Payments and paperwork overwhelmed the family.

The family said that in 2018, a California-based company who had taken possession of the home had foreclosed on it and sold it at auction. The family still owed nearly $100,000 on the home. The buyer? A Portland-based developer with Urban Housing Development LLC. KGW reached out to the company via phone Wednesday but did not hear back.

Fast-forward to this year, officials put a moratorium on evictions to keep people struggling amid the pandemic in their homes. But in September, a judge ordered the family out, arguing this eviction doesn’t qualify because it was ordered before the moratorium went into place.

Since then, police said the camp has slowly formed in protest. They said they’ve been called more than 80 times for fights, threats and reports of shots fired.

On Tuesday, police went to the home again. They emailed reporters photos of what they found, which included two handguns, bear mace, 250 rounds of ammunition, multiple sets of body armor, ballistic vests and helmets. Police made arrests on Tuesday, but they haven’t been able to clear the camp.

Mayor Wheeler tweeted Tuesday night that he’s authorized, “Portland police to use all lawful means to end the illegal occupation.” He added there will be no autonomous zone in Portland.

I am authorizing the Portland Police to use all lawful means to end the illegal occupation on North Mississippi Avenue and to hold those violating our community’s laws accountable. There will be no autonomous zone in Portland.

On Wednesday, Portland police demanded this stop and the neighborhood “return to peace.”

Activists told KGW that in one of Portland’s most popular and fastest gentrifying neighborhoods, they’ll fight to keep the Kinneys in their home.

“This is not a story of an autonomous zone,” said Coya Crespin with the Community Alliance of Tenants. “This is a story of systemic oppression.”

RELATED: Protesters having little to no impact on business, president of Historic Mississippi Business Association says