The program has brought teachers of color to Portland and Beaverton schools for 30 years. Now, the program is in jeopardy due to lack of funding. 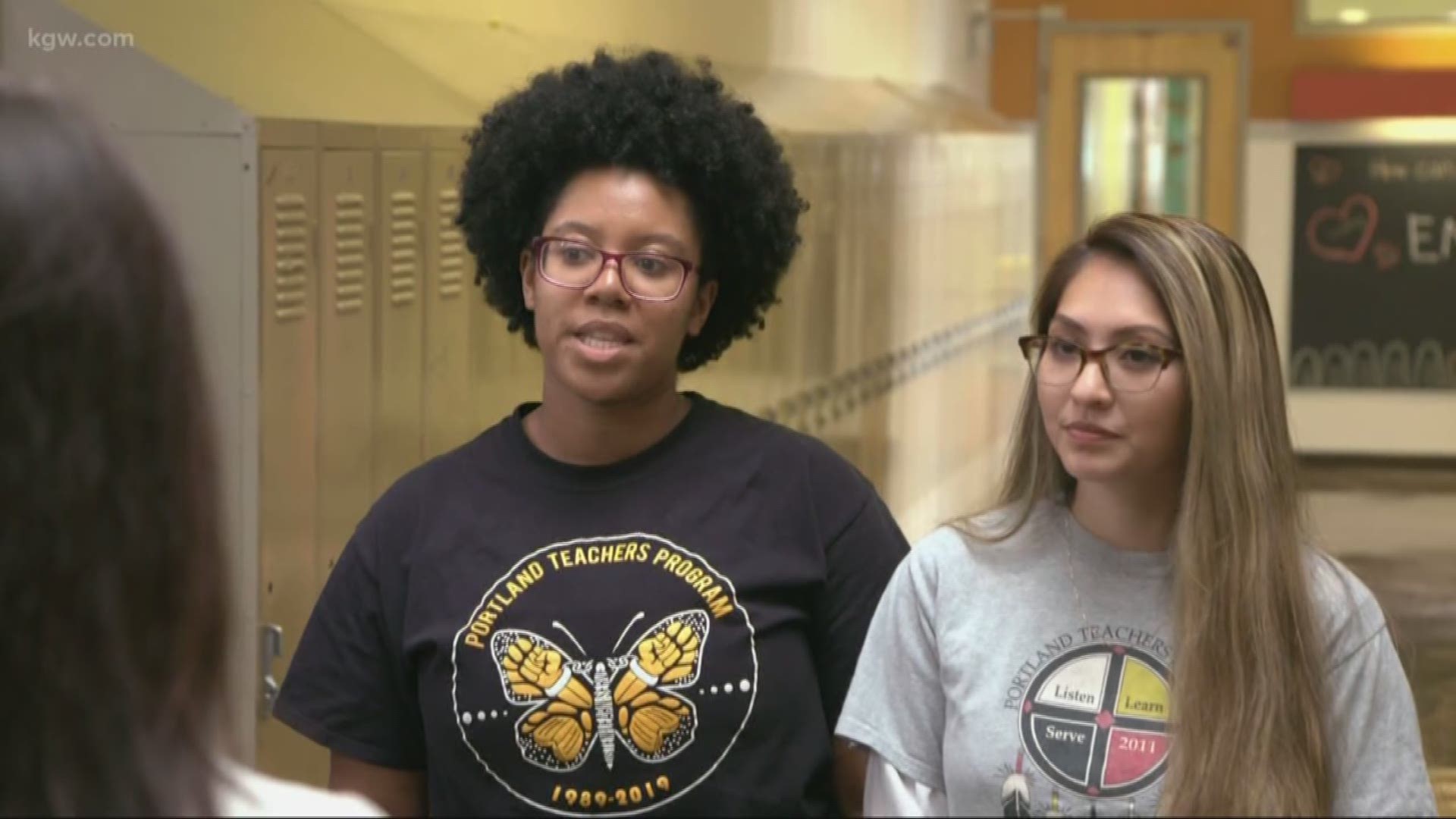 PORTLAND, Ore. — Portland Teachers Program has recruited dozens of teachers of color over the past 30 years to teach in Portland and Beaverton public schools, but the future of the program is now in jeopardy.

The program and the impact its graduates have had on Woodlawn Elementary School was the focus of Inside Woodlawn Episode 2. KGW's Cristin Severance is spending the 2019-2020 school year inside the school, chronicling the staff and students.

The PTP exists through a partnership between Portland Community College and Portland State University, and provides tuition waivers. Graduates from the program get placed in local schools.

"I think that for me, like thinking about my own experience, I wish I had had more role models and teachers and educators and mentors that looked like me. And that's one of the reasons why I do the work that I do and why I want to be a teacher and why I do so much youth work is because I feel like there's so much value in seeing somebody that looks like you," said.

RELATED: Inside Woodlawn: Program that recruits teachers of color in danger of ending

Teachers say this isn't just a scholarship program for teachers of color, but a deeply philosophical program that demands the practice of core values, including vision, compassion and activism.

Now, after 30 years and 230 graduates, PTP alumni worry the program is in danger of ending. The program is no longer accepting new students as they figure out funding for the coming years.

That means current students like Robinson and Emily Nyguen, another student teacher at Woodlawn, may be the some of the last PTP graduates.

RELATED: Inside Woodlawn Ep. 1: One year inside a Portland elementary school

"So, I'm constantly just thinking about what the future can hold, whether that's new partnerships with other universities or whether that's funding from the state, whatever that is. But there's something needs to happen for us to continue to do the work that we are doing," said Robinson.

"It breaks my heart just thinking about the incoming, like there's no longer incoming students right now just because of we're so unsure of the future of PTP and how the funding works," said Nyguen.

Portland Community College said their commitment to PTP hasn't changed, but the program can't continue in the future without the full tuition waivers from Portland State University.

“PCC is using this period to assess how the reduction of tuition support will impact the program in terms of size and scope. Simultaneously, we’re in conversation with other local 4-year institutions to explore their interest in partnering with us on the program. And we intend to recruit students for the spring term,” said PCC spokeswoman Kate Chester in an email.

PSU Dean of the College of Education Marvin Lynn told KGW said they are committed to continuing PTP and emphasized that current students enrolled in PTP will get the full tuition waivers.

Dean Lynn said the cost of the program exceeded what they had available in their budget, so they have to look for funding outside the program.

That could mean future students of PTP would receive partial tuition or continued full tuition until they are able to find the funds.

Dean Lynn was adamant PTP is not going away but did admit it could look different than it does today.

Former graduates say the future PTP could look much different than the program they went through.

PSU is meeting with all of the groups involved over the next few weeks to figure out a resolution.

KGW's Inside Woodlawn is a fresh take on teachers surmounting challenges to successfully teach their students, every day, even as the world changes. We appreciate the latest story in the year-long series highlighting the profound impact that the Portland Teachers Program (PTP) has had on helping to shape faculty diversity at Woodlawn Elementary School.

Portland State has fully committed to full tuition waivers for all students in the PTP pipeline. PSU provides two years of free tuition at the undergraduate level and another one year for the master's program. Since PTP's inception 30 years ago, PSU has gifted over $4 million in tuition waivers. We are committed to the program and the partnership through Portland Community College, Portland Public Schools, and Beaverton School District, and PSU will continue to fund the PTP for future generations.

Portland State's College of Education (COE) has demonstrated its long-term commitment to diversifying the teacher workforce in Oregon, with focus on inclusive curricula and social justice modeling. PSU's teacher preparation program had the highest number (135) and the greatest percentage (32%) of racially diverse candidates of any other teaching program in the state of Oregon.

We look forward to our continued partnership to advance the Portland Teachers Program.