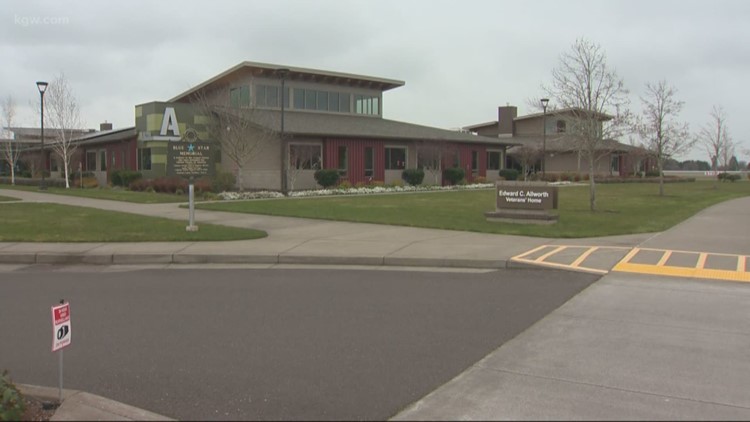 LEBANON, Oregon — A veterans’ home in Lebanon, Oregon, has been a hot bed for the spread of COVID-19.

Of the 151 people who live at Edward C. Allworth Oregon Veterans’ Home, 14 tested positive for COVID-19 and one of them died from it early Sunday morning.

The death was the fifth in Oregon connected to COVID-19. There have now been a total of 10 deaths.

In an effort to control the outbreak at the veterans' home, Dr. Rob Richardson, one of the medical directors, is using a treatment combination of hydroxychloroquine, known by its brand name of Plaquenil, and antibiotic azithromycin, commonly referred to as Zithromax Z-Pak, to treat those who have tested positive for the virus.

RELATED: Veteran dies of coronavirus in Oregon, fifth death connected to COVID-19 in the state

Dr. Richardson says he offered patients Plaquenil after speaking with an infectious disease expert. Once small studies came out of France indicating a possible synergistic combination, he added azithromycin to the treatment plan for many of the patients he had started on Plaquenil earlier in the month.

He is not the only physician attempting this treatment. According to the Centers for Disease Control and Prevention (CDC), hydroxychloroquine has been administered to hospitalized COVID-19 patients on an uncontrolled basis here in the U.S. and around the world in recent weeks.

So far, he has used the combination on eight out of 14 symptomatic patients. All residents at the veterans' home that have contracted COVID-19 are considered high-risk because they are older than 60 and have underlying medical conditions. Dr. Richardson says he didn't use the drug combination as an initial treatment on less severe patients at first, but began doing so as more research emerged around its use in mild to moderately symptomatic patients at high risk.

However, some residents with the disease are not candidates because they have underlying heart conditions that would be considered "contraindications" and have a higher risk of complications from the drugs.

"The nice thing is this drug has been around a long time so we know its contraindications. The ones I haven’t been using it with are mainly cardiac contraindications but it also can cause retinal changes. But we’re only using it for five days, so I’m not really worried there. I haven’t used it yet on anybody who has seizures but that would be certainly a risk because it can interfere with epilepsy."

Medical professionals can offer a high level of care at Edward C. Allworth Veterans’ Home and Richardson says all the people he started on the combination would otherwise be admitted to the hospital.

“I’m seeing improvement within 24 to 48 hours but I can’t tell you whether that’s the course of the disease - I don’t have a control arm - or whether it’s the effect of the drug,” Dr. Richardson said.

Richardson says there are no other potential good treatments at this time and folks who are sick at the facility are not candidates for being put on ventilators and admitted to the hospital.

“I don’t want people to rely on these and say this is going to be the saver of all medications. We don’t know that yet and it may be an effective treatment and it may turn out that it shows that it is no better than a placebo in the outcomes. But so far in the eight patients I’ve treated with it, out of our 14 symptomatic patients, I have not seen an adverse outcome and that would be the reason I would stop using it, if I thought the risk outweighed the potential benefits," Richardson said.

But Dr. Richardson hopes, as he works to control the virus in the facility, that he won’t have to continue to administer these drugs because he doesn’t want to take them away from those who need them on a daily basis.

Many people with autoimmune diseases like lupus or rheumatoid arthritis depend on hydroxychloroquine to help them function on a daily basis. In the U.S., hydroxychloroquine is mainly used to treat inflammation and is in a class of medications first used to prevent and treat malaria.

According to the CDC, hydroxychloroquine, chloroquine and azithromycin are among a variety of drugs approved for other uses currently being studied in several hundred clinical trials around the world.

In recent days, people across the United States report being unable to fill their prescriptions due to a shortage of the drug caused by publicity around hydroxychloroquine as a treatment for COVID-19.

"However, providers are working with all their patients to secure what they need at this point," a Providence Health & Services spokesperson said.

When asked if patients could still fill their prescriptions locally, the spokesperson said: “I know the clinic is checking with all local pharmacies to help make that happen for those who wish to fill locally.”

However, the FDA has not approved the drugs for treatment of COVID-19 and they are still under investigation in several new clinical trials.

Excitement around the therapy grew after a small study reported that the level of SARS-CoV-2, the coronavirus that causes COVID-19, dropped in patients who were given hydroxychloroquine by itself or in combination with azithromycin. The study was not done in a controlled clinical trial setting and public health authorities say it should not be construed that the drugs are safe and effective in treating the new coronavirus.

These medications, in any dosing, are by no means benign. Experts are warning doctors about using these drugs in patients with certain chronic medical conditions or who are taking other medications that might interact poorly. Chloroquine and hydroxychloroquine, the latter being much safer, carry side effects such as arrhythmia, damage to the retina or very low blood pressure.

Given all the uncertainty surrounding the COVID-19 pandemic, fear and anxiety is heightened. In the days following the president’s announcement, some have been acting on those heightened emotions - and perhaps a small sliver of hope - and have started self-medicating.

People who don’t need hydroxychloroquine are hoarding it and even taking it to try to prevent transmission. A man from Arizona died and his wife is in critical condition after they took chloroquine phosphate, used as a fish tank cleaner and different from FDA-approved chloroquine.

On Wednesday, the Oregon Board of Pharmacy issued a rule for prescriptions that will be in effect until the public health crisis is over.

Prescriptions for chloroquine or hydroxychloroquine can only be dispensed for the following conditions:

The FDA warned on Wednesday: “No drug – including chloroquine – should be taken without a prescription.”

RELATED: How do report workplace violations? Can I still have my house cleaned? Your coronavirus questions answered