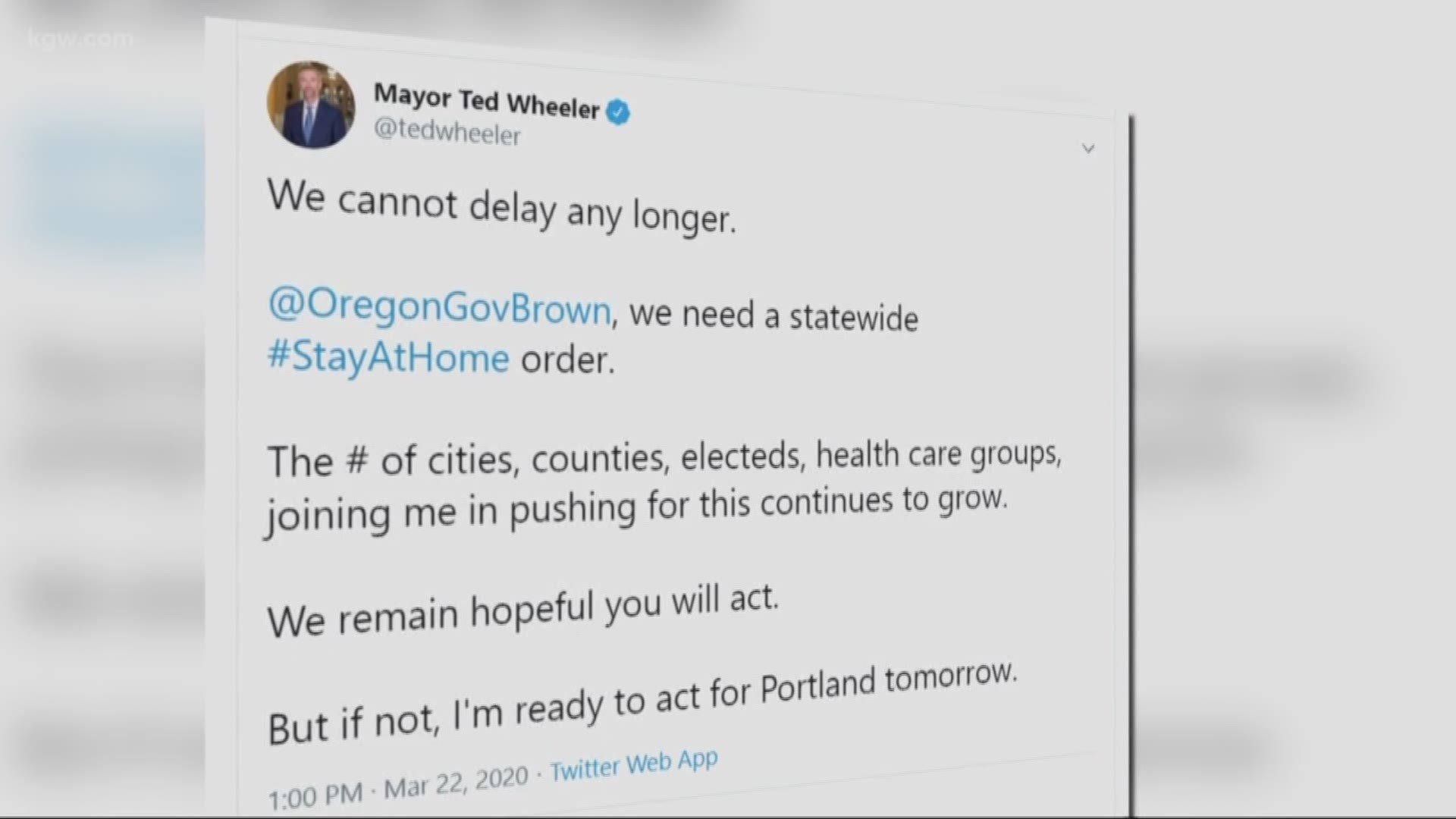 WARRENTON, Ore. — Despite state leaders urging people to stay home and practice social distancing due to the spread of COVID-19, beaches, parking lots and roads at the Oregon Coast have been packed with crowds this weekend.

Many people don't seem concerned about social distancing or the impact the crowds could have on the people who live there. As a result, Seaside declared a state of emergency Saturday and the mayor of Warrenton issued a 24-hour notice for visitors to vacate campgrounds, state parks, vacation rentals and hotels.

"Hordes of people were coming down to the city and to the region in general. It was a clear and present issue and we had to act. So we moved forward to vacate all the campgrounds except for employees and camp hosts," said Warrenton Mayor Henry Balensifer.

The City of Manzanita also ordered all visitors to leave town within 24 hours and return home under the authority of the city's state of emergency declaration.

The city wrote: "On behalf of our citizens, business owners and our community who depend on the few resources we have, we request civil cooperation."

Astoria Mayor Bruce Jones posted a video Sunday, announcing that under its state of emergency declaration city council approved a ban on vacation and leisure travelers in hotels and short-term rentals. Medical patients and essential workers are still allowed.

Neighboring Seaside went a step further Sunday evening. It ordered hotels and short-term rentals to shut down and restricted access to all public buildings and parks, streams and beaches that run parallel to city limits starting Monday. The city was able to do so under its new emergency declaration, which went into effect Saturday.

Seaside beach areas run from the Cove in the south to the edge of the estuary separating Seaside and Gearhart to the north.

Seaside ordered these restrictions in conjunction with Clatsop County. After declaring an emergency this week, Clatsop County Board of Commissioners took a drastic step on Sunday.

They banned camping in unincorporated areas of the county and within incorporated areas not under another emergency declaration; closed short-term rentals, homestay lodging and hotels; and closed pools, spas and other public bathing areas. The order begins at noon on March 23 and will last two weeks.

Under the county's order, hotels are closed except to anyone currently there with reservations longer than 30 days or who has reservations related to work. Campground staff, hosts, and people working in Clatsop County on a temporary basis are exempt from the order.

“With these measures, Seaside and Clatsop County take mutual steps to protect all of the citizens in our community on the North Coast,” Seaside Mayor Jay Barber.

Tillamook County announced Sunday morning it would effectively close outdoor recreation to. It closed all privately-owned, county, state and federal parks parks to day use and overnight camping. It is also closing access to beaches and boat launches (except to commercial fishermen) beginning Monday and lasting through April 28.

Tillamook is closing all hotels, motels, bed & breakfasts and short-term rentals to anyone not providing essential services or in the county for commercial purposes.

The county board of commissioners said in a statement:

"COVID-19 represents [an] unprecedented threat to public health the likes of which has not been seen in the past 100 years. The severity of the threat to life, health and safety calls for extreme measures and immediate action. We care deeply about the economic resilience of our lodging providers and businesses in the tourism sector and are grateful for their sacrifices for the protection of their employees, guests and the community at large."

"It was almost infuriating that people would have such disregard for not only themselves but other people," Bige said.

Lincoln City, Cannon Beach and Manzanita have all been crowded with people all weekend, prompting concerns for the lack of social distancing.

One Manzanita resident said it was as packed as the 4th of July and said there needs to be a crackdown. "Four weeks would help flatten the curve," they said.

The coast has limited healthcare resources and people who live there worry what could happen.

"These people were coming in, flooding our stores, supplies were starting to get scarce to start with, and our supply chain is a little different than say Portland, where all the warehouses are about 10 miles down the road," Balensifer said. "Our supplies come from quite a distance because ... we have two main roads, Highway 30, Highway 26. An accident happens on one and that whole thing kind of shuts down for a while."

Balensifer also pointed to the fact that there are only two hospitals there so they don't have the capacity to care for a surge of people. If a shelter in place order does happen, he doesn't want visitors sheltering in place there. He said visitors are also hoarding goods there because they could not find them in Portland.

Residents in Seaside started a petition asking for the city to take proactive measures and limit spring break activities.

As of now, the governor is only asking people to stay home. There has been no official order.

In a tweet Sunday, Brown wrote, "On Friday night, I asked all Oregonians, on the eve of spring break, to stay home and stay healthy. Unfortunately, our trails and beaches were packed this weekend. I want to be absolutely clear, you are endangering all Oregonians when not following social distancing orders."