As we celebrate the MLK holiday, advocates for racial justice say the words of the late civil rights are more relevant than ever. 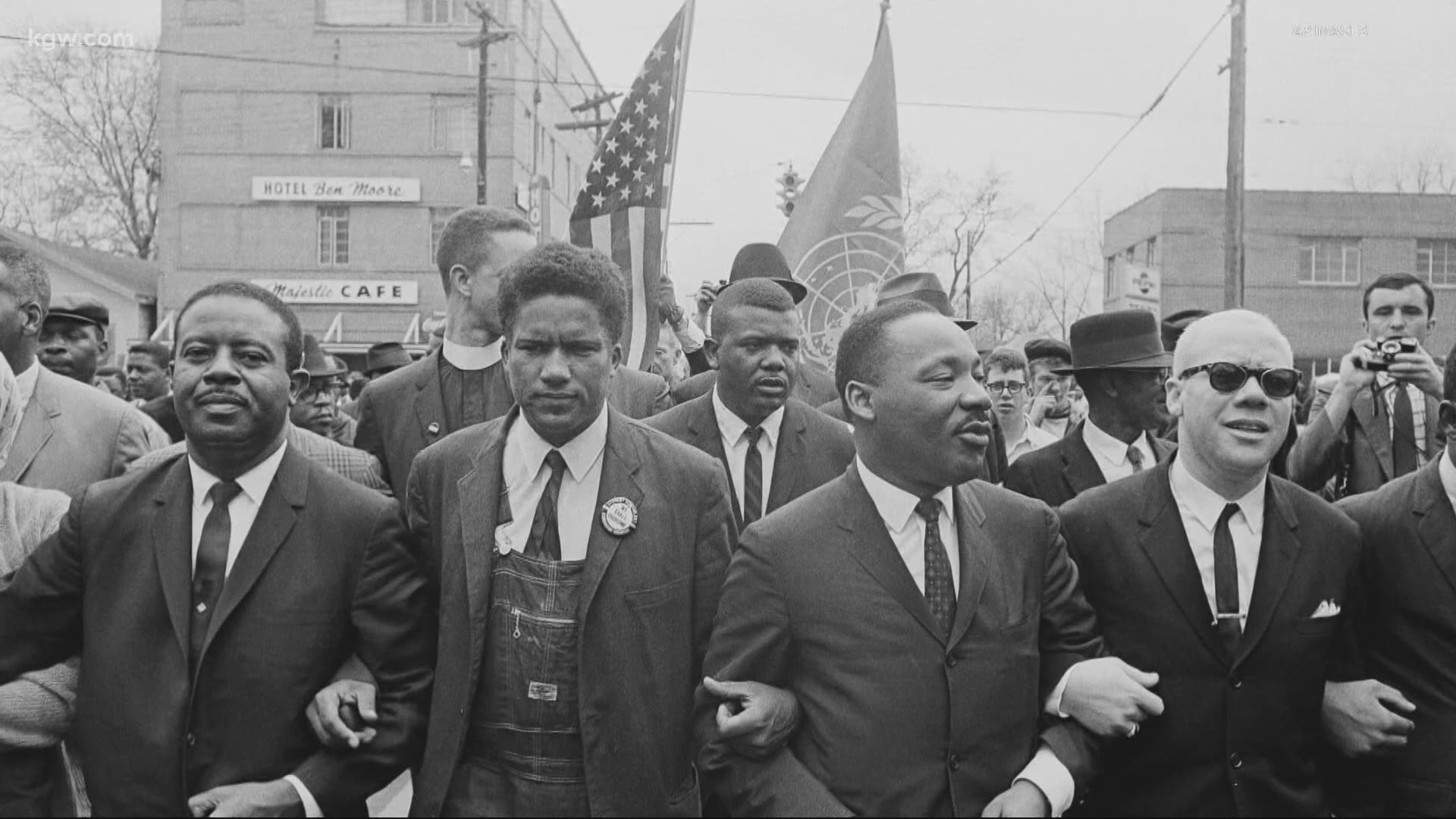 PORTLAND, Ore. — This is an MLK holiday unlike any other. We're honoring the late civil rights leader for the first time since the racial justice protests that gripped the nation.

What would Dr. King have thought about what happened here over the spring and summer?

Is the movement carrying on his message?

And after the riot at the U.S. Capitol, where does our divided country go from here?

Marcus Mundy, Executive Director of the Portland-based Coalition of Communities of Color, said King's messages are needed now more than ever.

"His message was one of fairness and peacefulness, which is something we haven't seen in the current protests. He was looking, not for extra, not to slice anybody out of their opportunities, he was just looking for fairness and equal opportunities for all, which means justice for all," Mundy said.

RELATED: How Martin Luther King Jr. Boulevard in Portland came to be

The cry for justice also went up nationwide last spring after the death of George Floyd at the hands of Minneapolis police.

"Everything that they were fighting for in the 60s — better housing, not to be killed by the police, better opportunities, better education — even though those marches in the spring were predicated on another killing of a black man, they wound up being about all those things, as well. So, I see direct comparisons between the two," Mundy said.

MLK condemned the use of violence but Mundy thinks Dr. King would've loved the peaceful demonstrations centered around social justice.

RELATED: A community conversation on black history and change

"I think when you look at this past summer's events, the goal was really to bring attention to a wrong that needed to be righted and that was the same goal as the civil rights movement, to right wrongs," she said. "King was looking at social justice issues that tackled a lot of different areas including the anti-war movement, including poverty. I think the legacy of what King was doing showed us that this is something we have to continue doing. It didn't just end with the assassination of Dr. King."

Dr. Jackson sees one big difference between the past and present. She said there are now other groups that have hijacked the social justice mission.

"When we look at the civil rights movement, we didn't have the level of violence and the level of co-optation that detracted from the goals of the protest at the time or the civil rights movement," Jackson said. "The concern that I have is that history will take some of the things that happened in the summer of 2020 and will mislabel those as having been related to Black Lives Matter when, at some point, that was a different type of movement that was occurring. It was not solely about BLM."

The United States is divided, no question, but after the insurrection at the Capitol on Jan. 6 where does our country go from here?

"We go to healing and reconciliation but we cannot have that without acknowledgement and some repentance," he said. "You know, you're not going to get better unless you acknowledge the sins of the past and we have a whole raft of sins of the past. People say, 'don't look back, let's just move ahead.' We must look back. We must acknowledge what happened. Never forget it and then begin to take steps forward but one small step at a time."

Credit: AP
Black and white passengers are still segregated on an Atlanta Transit Company trolley April 23, 1956 following the Supreme Court decision outlawing segregation on all public buses. State officials said that Georgia was not a party to the decision affecting South Carolina, and that Georgia's segregation laws would not immediately be affected. (AP Photo/Horace Cort)

"We have never been so aware of the fact that in recent years and especially in the last week that not everybody feels the same way," Jackson said. "And some people are going to make it a lot more difficult for us to move forward especially if this is not their particular dream. They have a dream that is quite different than the dream proposed by Dr. King and his supporters. It's going to be an uphill battle. I wish us well as a country because the eyes of the world are on us.

On this MLK holiday, Dr. Jackson said she'd like to see people step outside their information bubbles and expose themselves to different perspectives. She suggested reading the book, "Caste," by author Isabel Wilkerson. Time called it a "new framework" to understand injustice in America, and Oprah chose it for her book club.

Finally, Mundy had a message for those who lead our cities and states.

"Whenever they're making a decision that affects other people, consider their position using the equity lens, using a lens from someone else's perspective," he said. "I'd encourage all the people in power to use that lens before you make a decision that's going to determine a negative outcome for someone's life. I think Dr. King would want us to do that. Just reflect a moment before we make life altering decisions for someone else."

Hundreds March on Portland, 57 years after the March on Washington

1 / 12
KGW
Hundreds gather for a march and rally outside the Oregon Convention Center, 57 years after the March on Washington.