'They are going to contribute': Olshey on Collins, Swanigan

Portland two rookies answered questions about several topics, including how Collins dealt with coming off the bench at Gonzaga and Swanigan's long and inspiring journey to the NBA. 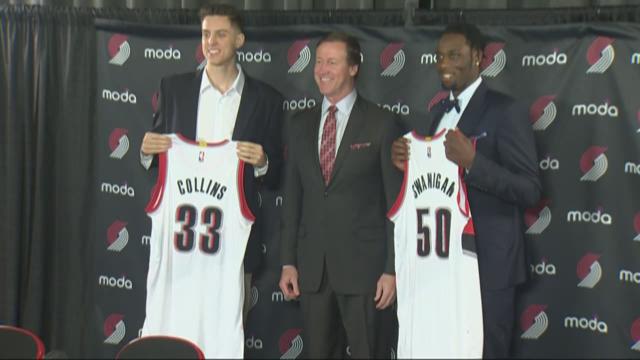 Portland's two rookies answered questions about several topics, including how Collins dealt with coming off the bench at Gonzaga and Swanigan's long and inspiring journey to the NBA.

As a child and young teen, Swanigan struggled with obesity — he weighed nearly 400 pounds before he started eighth grade — and homelessness. Swanigan was adopted at age 13 by former Purdue football star Roosevelt Barnes, now a prominent sports agent, who provided stability and direction. Over the next seven years, Swanigan transformed his life.

RELATED: From homeless shelters to the NBA, Swanigan reflects on the process

Blazers general manager Neil Olshey and head coach Terry Stotts were both in attendance and spoke about the two players and the team's plans for the rest of the offseason.

Collins' parents, Michael and Heather, were at the press conference, as was Barnes, Swanigan's adoptive father.

The following is a transcript of the press conference:

Collins on how it feels to be drafted

I'm real excited. This is a great organization. I think it's a great place to start my career. I've just been on cloud nine since draft night, so I'm really excited.

Swanigan on how it feels to be drafted

I'm looking forward mainly to the opportunity. That's the biggest thing I've always wanted, a chance. The Blazers have given me that. I'm ready for it right now. I'm excited.

Swanigan on the hardest part of his journey

Swanigan on waiting to hear his name called at the draft

Long wait, but it's been nothing compared to the 4-5 years trying to get ready for the draft. It felt long, but I knew the team that picked me would really like me and enjoy me. So I'm looking forward to that here.

The competition we played towards the end of the season in the tournament. I started playing really well against that big competition, against the best players in the country. I felt like my game was in the right spot to make that next step. It's been a dream of mine since I can remember, so I just wanted to take advantage of it.

Collins on coming off the bench at Gonzaga

When I went to Gonzaga, I expected to play a lot. That's what they told me when they recruited me. They told me I needed to be ready to start. [Gonzaga fifth-year starting senior Przemek Karnowski] came back and I knew my role wasn't going to be a starter right away. So I just tried to embrace that role and make an impact on the game and try to affect the game in positive ways and contribute to wins in any way I could.

Stotts on Collins and Swanigan

I like both of their demeanors on the court. Both are very competitive, hard-nosed players. They're aggressive. I like their mentality. More than anything else, at this stage, I like the players they're going to become. They're both young. They've shown a willingness to work. The X's and O's and things on the court will all work themselves out. What they bring to our team right now and what they're going to bring in the future is very encouraging. They both play a different way, but they know their game and I think they have a lot of potential.

Collins on being known for his toughness

I think it started with my dad. When he played, he wasn't the most skilled guy on the court all the time, but he was probably the meanest wherever he went. That kind of runs in the family. My sister's the same way. I love to compete. That's why I love basketball, the competitive nature of it. That's kind of how I've always been. Same with working in the gym; you never want anyone to work out harder than you. I've always played with a chip on my shoulder.

Collins on what he brings to the Blazers

I just know what I can bring, and that's toughness and a winning mentality. Regardless of whatever role they want me to play, I'm going to make the best of it and try to contribute to wins and get this organization where they need to go.

Collins on Blazers players reaching out to him

Damian [Lillard] and CJ [McCollum] and [Jusuf] Nurkic have all reached out to me so far. Damian tweeted me and Nurkic tweeted me. CJ actually texted me this morning and said, 'Welcome to Portland' and if I needed anything to hit him up.

Swanigan on players reaching out to him

Damian [Lillard] reached out to me. I've talked to [Jusuf] Nurkic and I talked to Moe [Harkless] in the locker room since I've been here today.

Collins on the stigma of white players in the NBA

Olshey on the Blazers' roster and offseason plans

We're never content with the roster. Our goal is every day we wake up looking to find ways to improve the roster, to accelerate what we've been trying to do the last couple of years and make the team more competitive.

People want to compartmentalize different player acquisition vehicles. The draft is the first one in what's a long process. We're incredibly pleased with what we were able to accomplish in the draft with both of these guys. They are going to contribute. They're going to earn their minutes like everybody that comes into the organization, they're going to fight for whatever minutes they get. They're the kind of people that we believe that's important to them. From a talent standpoint, we're incredibly pleased we were able to get both of these guys.

It doesn't go unnoticed, we know we have the youngest team in the NBA. But we also have the youngest team in the NBA to make the playoffs in back-to-back years, which nobody else has done either. So nobody is saying that this is all about youth and just the future and long-term. What it's about is building this thing the right way, so that it's sustainable, so we can compete now and into the future.

On thing we've all learned is there are no quick fixes. Quick fixes create problems. That's what they do. That's not what we've been about here. We've been about building something that can be sustainable on a long-term basis, and we're going to be competitive while we do it.

And that's why we got two of the most competitive guys in this draft. We know they're going to raise the bar in practice, in games and in workouts every day.

He's meant a lot for me. Gave me structure early on, support. Everything you'd want a father to do for you. Showed me the way to get here and always held me accountable. He always told me the truth of everything I did, and that's all I could ever ask from him.

Swanigan on his perception of Portland

The biggest thing that has been consistent through everyone is that the fan base is really strong. They show up to the games, they support the team, they're passionate about the Trail Blazers.

Collins on his perception of Portland

The fan base I've heard, and I've seen over the years, is just incredible. I think we're both looking forward to playing for a fan base that has undying support. It's easy to play that way.

Swanigan on which position he'll play in the NBA

Not to be too simple, but I see myself playing basketball. What I mean by that is, you get on the court by passing, rebounding, shooting, defending. If you can do those things and help your team win, you'll find yourself on the court. It doesn't matter what you can do on offense, it matters who you can guard. Wherever they feel I can guard best is where I'll play.

Stotts on figuring out how these guys fit

As soon as we drafted them, I watched some edits on both of them, to get a better feel for who they were as players. It's a process over the summer. We'll have them in next week for summer league and they'll both be at [Tim Grgurich's] camp, and they'll be here in September. The next three months will be important for them and for us as far as getting to know each other and for them to assimilate to what we want to do and for us to take advantage of what they do. The start of the season is always in the back of my mind, but right now it's a process for both of them and us to get to that point.

Swanigan on the key to rebounding

Going every time. Your mentality. Wanting the rebound more than somebody else. Wanting it every time. Not being tired, so you have to be in the best shape if you want to be the best rebounder.

All the guys that have been in, working out, they're all at different phases from the post-injury. Ed is probably furthest along. He's actually in L.A. today with [Blazers Director of Player Health and Performance] Chris Stackpole for a four-month check-up with [Dr. Neal ElAttrache]. He's progressed to on-court, basically everything but contact.

[Crabbe] is six weeks post surgery so he's reintegrating onto the court as well.

Push yourself because, no one else is going to do it for you. #nurkfever #ripcity #timetowork pic.twitter.com/gtutSLEwuY

Nurk, as you know, he was incredibly deconditioned when we got him. He's got some imbalances between his legs, which creates deficits, which is one of the things we've been hyperconscious of from a return-to-play criteria. It's one of the things that [Chris Stackpole] basically uses as a guideline for where guys are.

All three will be ready to start camp, but it's a slower process. We're being very diligent because the shape we got Nurk in, is not where he would have been had he been with us the entire time. We're not only battling the deconditioning from before, but also the time away, the moratorium he had to make sure the bone healed.

So we need to correct the imbalances and the deficits to make sure when he returns to play full, it's done safely.

Olshey on salary cap coming in $2 million below the projection

I think we all kind of saw it coming when we watched Cleveland and Golden State sweep their way into the [NBA Finals]. It's something we were all prepared for. The league does a great job of keeping us apprised throughout the season. Those numbers aren't made public, but we had an idea of what direction it was heading.

When we saw what was going on, we know the value of the finals games and what that means to the [basketball related income], so we were prepared in advance when we all saw what I told you guys we were all going to see.

Right now, we've got 15 guys. There's still a lot of work to do. We're going to explore every opportunity to get better if there's a player available.

But there's $450 million in the marketplace this summer for free agents. So you're talking about taxpayer midlevel (expected to be about $5.2 million), what level player does that get, is it even an upgrade over the players we have?

That's part of the reasons we signed guys in advance last summer was in anticipation of where the cap was going, knowing the value of cap room wasn't going to be as much because of the preponderance of cap room in the marketplace.