In a news release, police said people in the crowd again spray painted and tore down security cameras and threw large rocks and fireworks at officers. 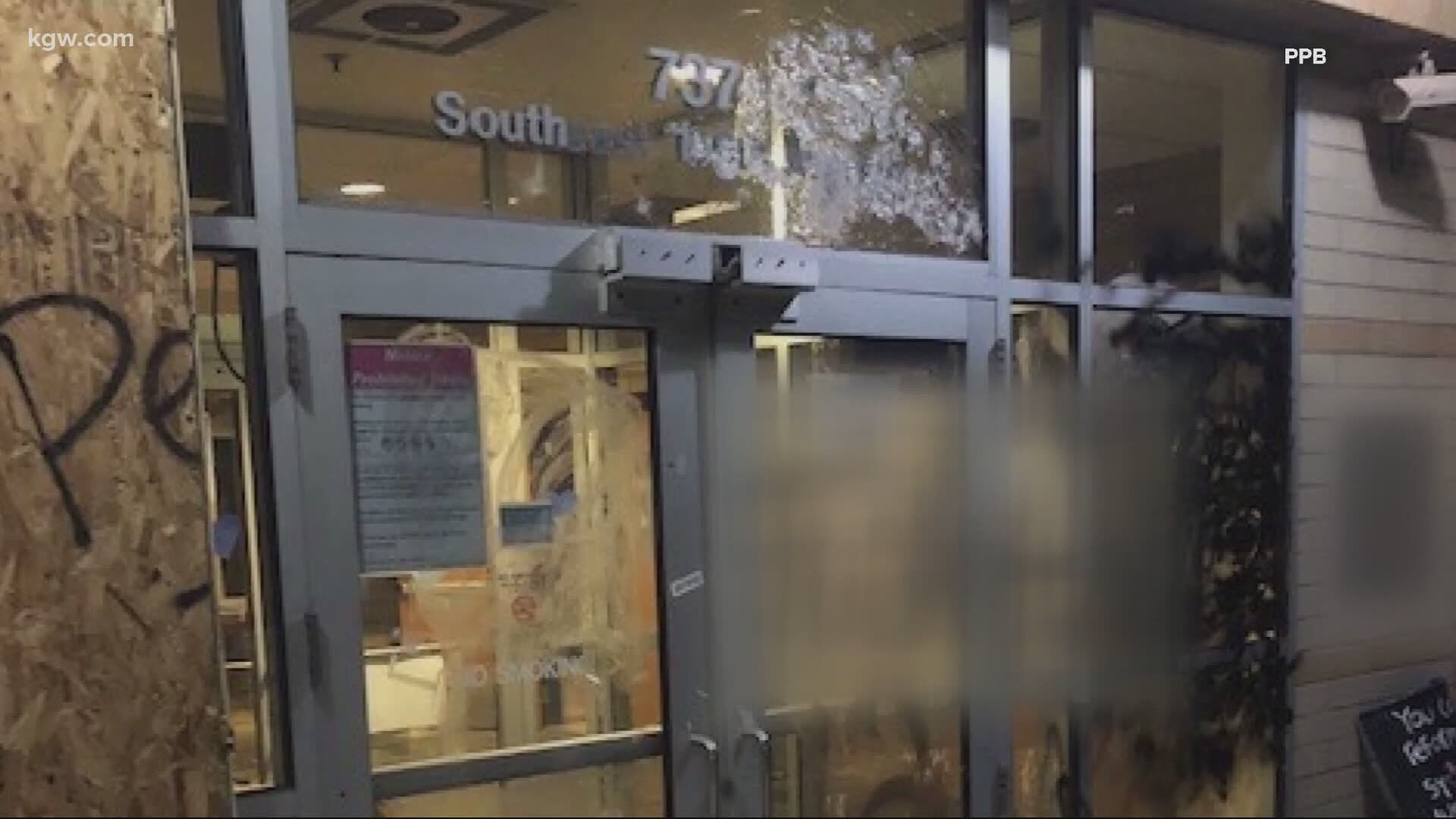 PORTLAND, Ore — Hours after Mayor Ted Wheeler, in a news conference Thursday, accused a small, masked group of “attempting to commit murder” by trying to light a police precinct on fire with officers inside, hundreds of people returned to Southeast Portland to face off with police again.

In a news release, police said people in the crowd Thursday night again spray painted and tore down security cameras and threw large rocks and fireworks at officers.

Police said a small group also started a fire in a trash can, a point confirmed by KGW crew on the ground, and doused a woman in paint.

She was one of two women who came to oppose fires and violent tactics.

Video shot by Zane Sparling of Pamplin Media Group shows one of them holding a Black Lives Matter sign.

A photo published by the Police Bureau shows the moments after another of them was doused with paint.

This unknown woman using a walker was confronted by the group currently outside East Precinct and paint was strewn all over her. pic.twitter.com/k1cCVMbNht

The demonstrations, which were broken up after officers declared an unlawful assembly, came one night after police said a group gathered around the East Portland Precinct, pulled boards off of the windows, used them to wedge the doors shut and tried to set fire to the building.

Police used tear gas to disperse the crowd and no one was injured by the fire.

“You are attempting to commit murder,” Mayor Ted Wheeler said in a news conference Thursday.

He was joined by police Chief Chuck Lovell and representatives for Portland Fire & Rescue.

Friday KGW reached out to every sitting city commissioner about their take on the events of the last two nights.

Jo Ann Hardesty, Amanda Fritz and Chloe Eudaly all either declined to comment or did not respond.

Mayoral candidate Sarah Iannarone, who is running against Ted Wheeler in the November election, appeared on Straight Talk with Laural Porter this week.

In the interview, taped Thursday afternoon, Iannarone said, “Protests are an important part of a healthy democracy … I understand why they’re angry.”

“I'm not the person setting the fires,” Iannarone said. “I'm not here to tell people how to protest. I don't smash windows. I clean up when things are unfairly targeted, but here's what I have to say. Their outrage at the police is valid and the problem of police brutality and executing Black lives in the streets is more important that petty vandalism and we can't forget that in this historic moment.”

Friday, Iannarone’s campaign sent KGW this statement on the issue:

Criminal activity is illegal, and of course I don't condone it. What I'm focused on is ensuring police do not use violence and even lethal force against people who have done nothing wrong, as we have seen nightly, and for decades. We must not take our focus off why these recent protests began, and reimagine public safety so we can save lives. I condemn arson, obviously. I also condemn the countless deaths of Black individuals at the hands of police.