Protesters took to the streets of Portland in solidarity with George Floyd and against police brutality.

PORTLAND, Ore. — For the sixth day in a row, there were large demonstrations in Portland involving thousands of people protesting police brutality and the death of George Floyd, the Minneapolis man who died in police custody after a police officer knelt on his neck for nearly nine minutes.

The thousands of protesters remained peaceful throughout the night while sending a loud and clear message. After the protest ended, a small crowd set fires, vandalized buildings and threw objects at officers. Police said that small crowd was dispersed by 4 a.m.

Wednesday was the first day of protests since former Minneapolis officer Derek Chauvin saw charges charges against him increased to second-degree murder. The three other officers involved in Floyd's arrest have also been arrested.

Below is a timeline from Wednesday's protests:

Around 2 a.m., after the protest had ended, Portland police said that a small group of people set fires and threw objects at officers, including fireworks, mortars and bottles. Police said windows were shattered at a building on the southeast corner of Southeast 2nd Avenue and Salmon Street and that a security officer was injured by a glass bottle. By 4 a.m., police tweeted that the crowd had been dispersed.

Many demonstrators have begun leaving, but a crowd still remains outside the Multnomah County Justice in downtown Portland. The area has been the site of clashes between police and protesters during previous nights, but remained peaceful tonight.

Police and reporters on the ground say protesters outside the Multnomah County Justice Center are de-escalating any potential sparks of tension.

As the crowd of thousands remains peaceful outside the Multnomah County Justice Center, Portland Police Chief Jami Resch tweeted out a three-minute video. In the video, Resch says the bureau has spoken with protest participants, pastors and other leaders and the bureau wants to be a part of a unified city and build trust with the community.

The crowd outside the Multnomah County Justice Center has grown to be blocks long. Police are advising the crowd not to touch the barrier. Thousands of people are gathered in front of the Justice Center. The demonstration remains peaceful.

A majority of protesters continued marching through downtown. It appears the crowd outside the Justice Center is shrinking.

Credit: KGW
Protesters outside the Multnomah County Justice Center in Portland on June 3, 2020

A group of protesters are in the area of the Multnomah County Justice Center which had fencing put around it after protesters broke into it and set a fire inside on Friday, the first night of protests.

A group of demonstrators has gathered at Waterfront Park 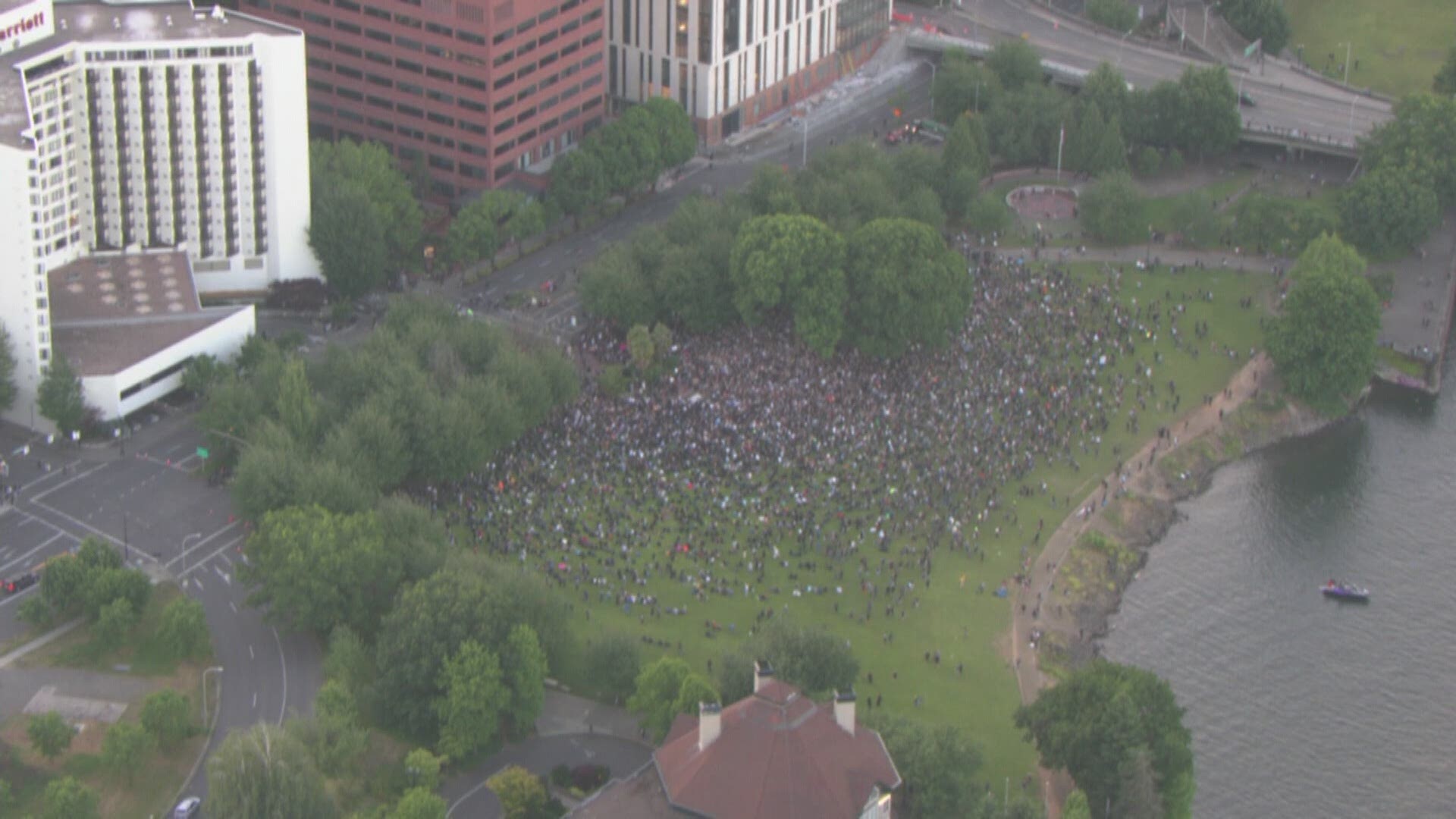 The crowd of thousands has gathered at Waterfront Park, where they listen to speakers and show solidarity with George Floyd.

The crowd of demonstrators is large. As some begin crossing under the Hawthorne Bridge, some can still be seen on the Morrison Bridge.

Protesters began coming off of the Morrison Bridge to downtown Portland. Demonstrators are on Naito Parkway near Waterfront Park. 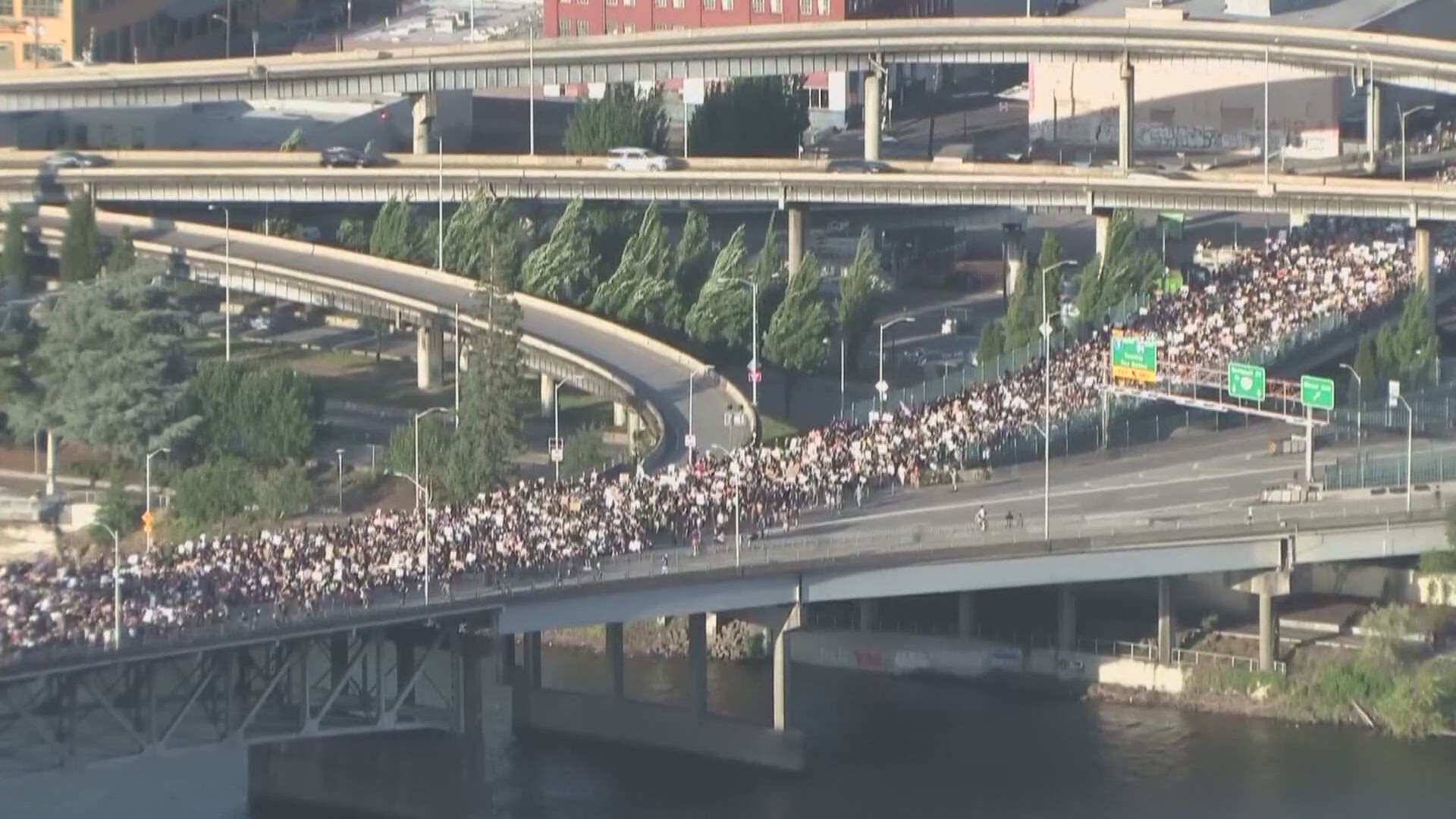 A black-led student protest in St. Helens was derailed on Monday due to fear it might cause destruction, but the students came together once again on Tuesday and continue to protest peacefully

Thousands of protesters in Oregon crossed the Morrison Bridge in a peaceful demonstration.

Police announce that a peaceful demonstration is traveling westbound across the Morrison Bridge.

Thousands of protesters have gather at Revolution Hall, and police announced that some of them have begun marching downtown. Police warn drivers to use caution while traveling in inner Southeast Portland.

Credit: KGW
Thousands of protesters gathered at Southeast Portland's Revolution Hall and marched across the Morrison Bridge to Waterfront Park on Day 6 of Portland protests against police brutality following the death of George Floyd

Protesters begin gathering in Pioneer Courthouse Square for the 6th day of protests.

Police and Fire and Rescue held a press conference to speak with members of the media about what it is like being in the protests and discuss some of the strategies used during the demonstrations.

Police announced via Twitter that the area around the Multnomah County Justice Center is closed as it has been since Friday's riot in the area.