Demonstrators again marched to downtown Portland in protest of racism and police brutality following the death of George Floyd. 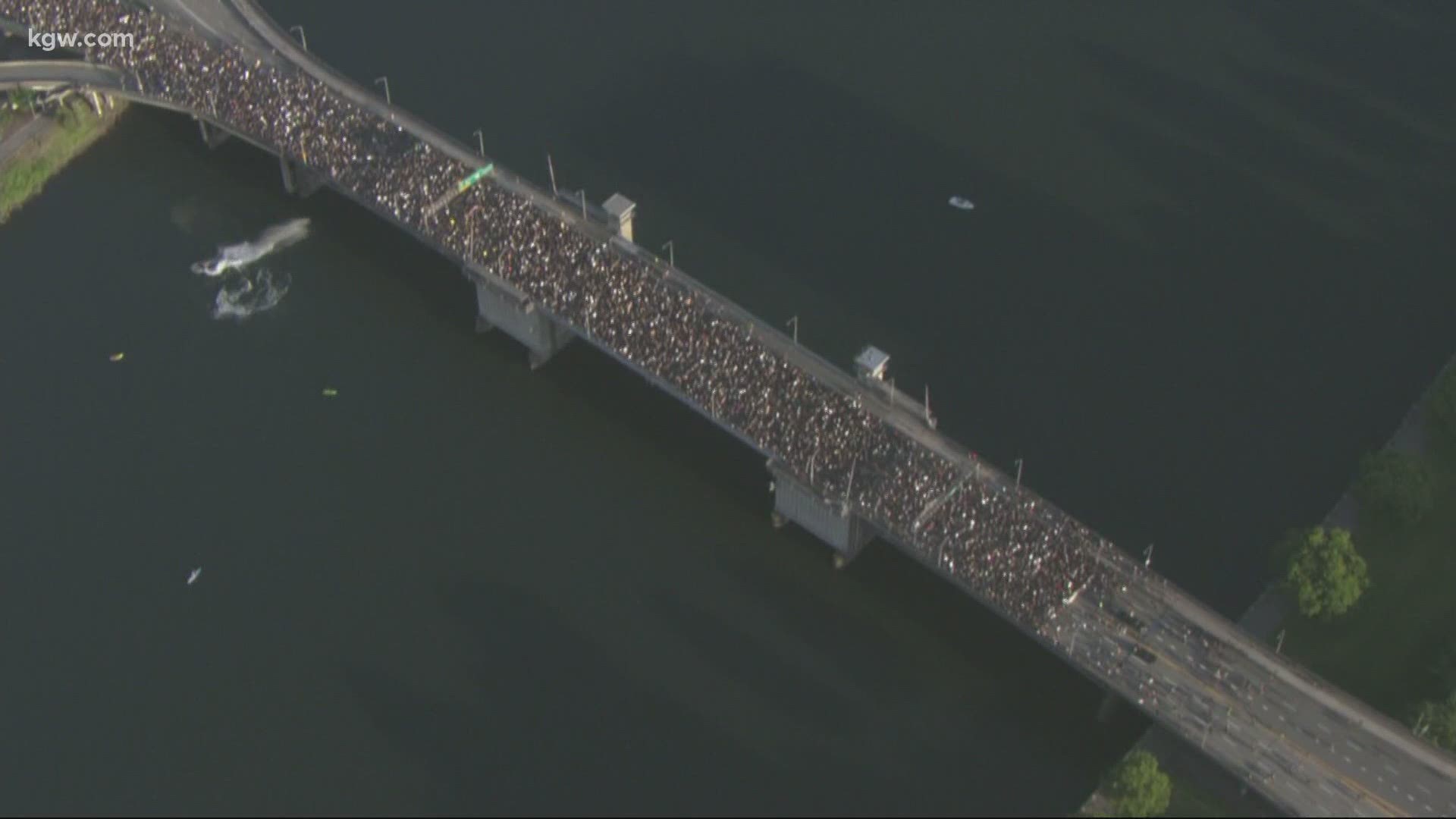 PORTLAND, Ore. — For the sixth day in a row, protesters held marches and gatherings across Portland to honor George Floyd, killed while in police custody in Minneapolis, and to protest against racism and police brutality.

By 10 p.m. a large group of protesters gathered around the Multnomah County Justice Center, where police had put up a fence around the perimeter. The fence has been there for several days after Friday night’s riot, which saw vandalism and a fire inside the building.

The protest remained peaceful. Police said the crowd was in the thousands. They also thanked those in the crowd who were asking others not to throw projectiles at officers.

According to The Oregonian, organizers announced at 11:30 that they would head home for the night and resume at Revolution Hall again on Thursday at 6 p.m.

"The Portland Police Bureau continues to have [dialogue] with the demonstration organizers to facilitate safety for all and to allow for the exercise of First Amendment Rights," Resch said in a prepared statement. "Tonight was a great example of a safe and responsible demonstration. This speaks to the testament of the thousands of participants and sends a powerful message. I greatly appreciate the community for expressing themselves while respecting others."

Around 2 a.m., after the protest ended, Portland police reported that some people were setting fires, vandalizing buildings and throwing objects at officers, including fireworks, mortars and bottles.

Police said windows were shattered at a building on the southeast corner of Southeast 2nd Avenue and Salmon Street and that a security officer was injured by a glass bottle. An officer was hit in the face with a full beer can, police said.

By 4 a.m., police tweeted that the crowd had been dispersed.

Police said officers made arrests, but didn't specify how many people were arrested or detained.

Officers stopped a vehicle and arrested the driver for an incident that happened during Tuesday night's demonstration. Police said the vehicle nearly hit one of the PPB rapid response teams. This incident is under investigation and police said more information will be released later.

"We have witnessed a pattern of behavior in the past several days where select agitators remain and target the police, engage in crimes, and cause disorder. We will continue our efforts to identify, arrest, and hold responsible those who engage in crimes in our city," Resch said.

Early in the afternoon, protesters began gathering at Pioneer Courthouse Square, where on Tuesday night a peaceful rally brought thousands of people.

And again an evening protest began at Revolution Hall, where for the past few days demonstrators have been meeting before marching downtown. Just after 7 p.m., some of the protesters had begun marching while others remained at the gathering.

Police asked that drivers use caution while driving in inner Southeast Portland.

Around 7:30 p.m. thousands of protesters began to march peacefully across the Morrison Bridge and into downtown Portland. The group was so large that part of it was crossing under the Hawthorne Bridge while another was still marching on the Morrison Bridge.

Thousands gathered at Waterfront Park for a peaceful demonstration before the group split off in several different directions and ultimately ended up together again outside the Justice Center.