Portlanders have demonstrated across the city for more than 80 straight days. 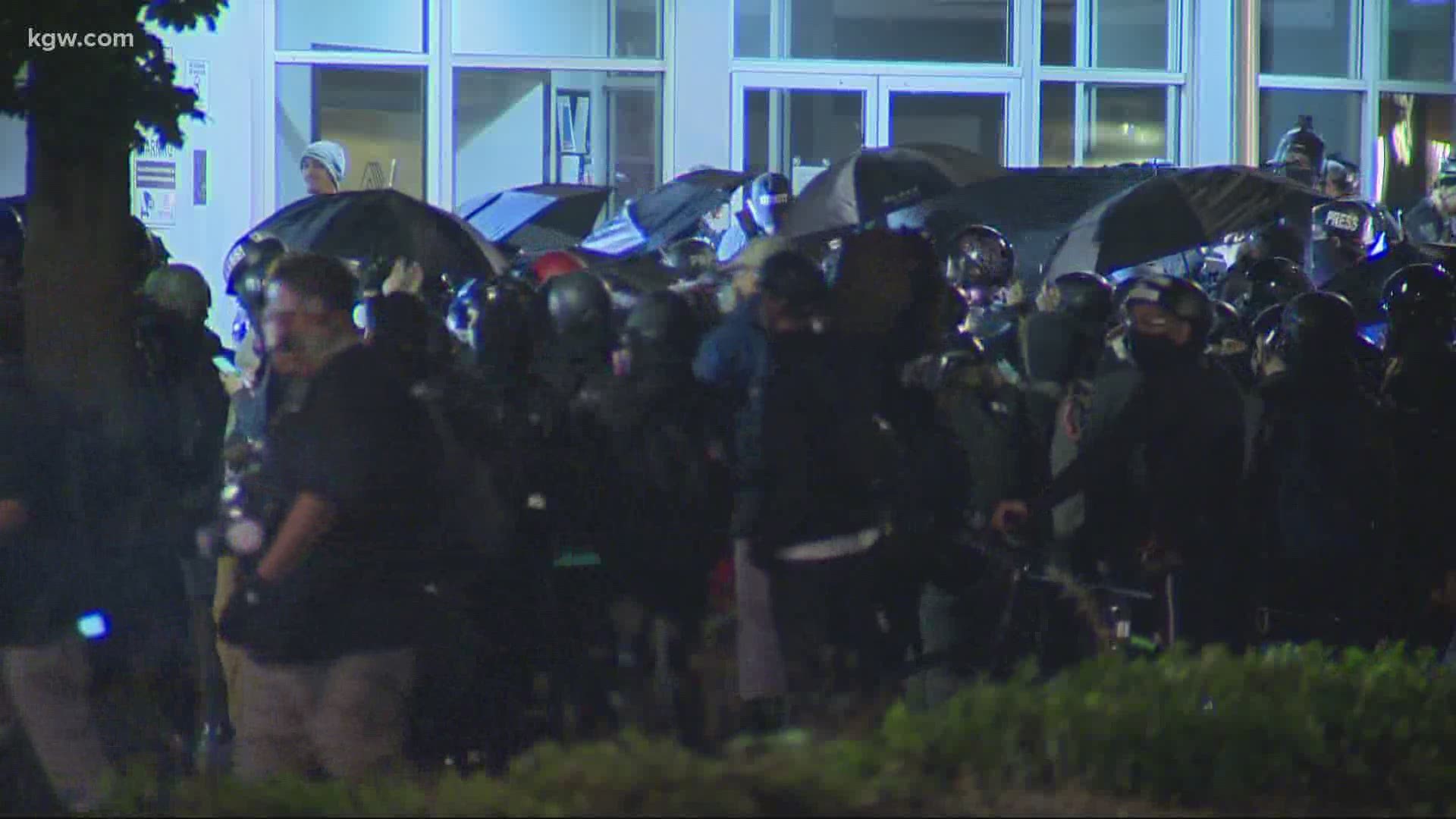 President Trump tweeted about the overnight protests suggesting that city and state leaders should ask him for more help to stop the riots.

Another bad night of Rioting in Portland, Oregon. A small number of Federal troops there to protect courthouse and other Federal property only (great job!). Wanting to be asked by City & State to STOP THE RIOTS. Would bring in National Guard, end problem immediately. ASK!

On Friday night, despite the rain, a crowd marched to the police North Precinct, at Northeast Martin Luther King Jr. Boulevard and Emerson Street. The group, estimated by reporters on scene as about 200 people, first met at Irving Park and marched about a mile, through neighborhoods, to the precinct. Protesters are calling for the total abolition of police and prisons.

They arrived at the precinct around 10:15 p.m. About 15 minutes later, Portland police said people were throwing projectiles and pointing lasers at officers. They threatened anyone involved in criminal activity would be subject to arrest.

Around 11:30 p.m., the crowd remained outside the precinct and police continued to give warnings. Officers saw protesters breaking police car windows and a window of a Boys & Girls Club van, PPB tweeted. At that time, there hadn't been clashes with police that reached the levels of previous nights.

Just after 1 a.m. on Saturday, the Portland Police Department declared that the gathered in the area as part of a riot. The crowd was ordered to disperse by traveling south.

Anyone who did not follow the order could be "subject you to citation or arrest, and may subject you to the use of tear gas, crowd control agents, and or impact munitions," the police said.

Smoke was deployed and officers physically forced protesters away from the area. Videos posted online showed several people being detained after the riot declaration, but it wasn't immediately clear how many arrests may have been made.

Police push protesters getting off the ground, other protestors try to help the fallen, police push them too pic.twitter.com/0p5IG5fBnm

As the precinct was being cleared, officers were caught on video pushing people who weren't walking fast enough. By 3 a.m., the protesters moved a block south of the North Precinct near the Blazers Boys & Girls Club.

Smoke grenades were thrown at protesters in the parking lot, according to videos shared on Twitter.

After a smoke grenade fail a protester picks up the canister and is subsequently shot. pic.twitter.com/uXR6r5SYnq

Portlanders have demonstrated across the city for more than 80 straight days, demanding an end to racial injustice and police brutality following the police killing of George Floyd in Minneapolis.

On Thursday night, protesters focused their energy out front of the Immigration and Customs Enforcement (ICE) building in South Portland. Federal Protective Service (FPS) officers and some of the protesters, which were estimated to be less than 100, began to clash. Portland police said protesters threw rocks, bottles and fireworks at FPS officers. The protest was later declared an unlawful assembly. Three people were arrested.

Also on Thursday, the Portland Police Bureau (PPB) sent out a timeline showing a snapshot of how every night has gone since May 29, which was the first night of mass demonstrations and ended with destruction in downtown and other parts of the city. Police declared a riot that night and have done so 15 more times over the past nearly three months.