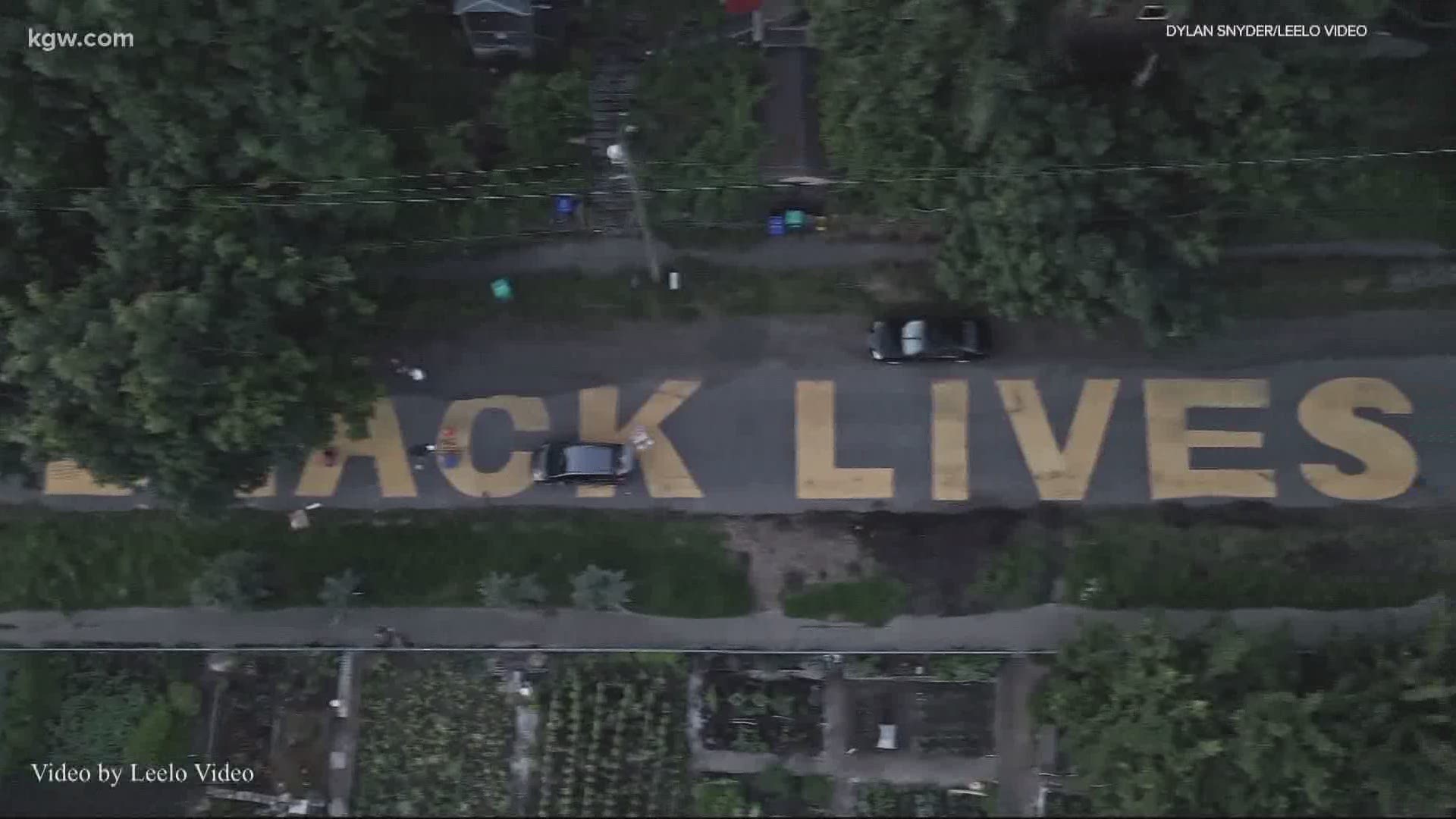 PORTLAND, Ore. — Under the shadow of the St. Johns Bridge along North Edison Street in Portland is a message big enough and bright enough for everyone to read.

It was an idea conceived by Nick Lloyd soon after seeing what the Washington D.C. mayor had painted in her city.

Lloyd waited for a dry week and then last Wednesday he swept the street free of any rocks and debris. Thursday night into Friday, the day of Juneteenth, he began painting, but realized he would need more paint.

"Sometime around two in the morning it became clear that we were only going to be able to spell a portion," Lloyd said.

He bought more paint and finished the 336-foot-long painting. Neighbors quickly joined his side.

"One woman and her 8-year-old daughter stopped for an hour to paint," he said, "This was very much a neighborhood doing it, more than a person."

Inside almost every letter, is a piece of Oregon's history of racism.

In the letter "B" it reads, "1800 - The Cowlitz people live nearby when the first Black visitor arrives in 1802. His name is York. He's on the Lewis and Clark expedition, and he's enslaved - William Clark has owned him since birth. These roads 1st appear on a map in 1865 - While Oregon has an annual tax on every nonwhite resident. Those who can't pay are forced to work for the state."

RELATED: Portland's racist history could be written into your home's deed

"We are all a part of history you can find your birth date somewhere between these letters and see that the story continues," Lloyd said.

Sherry Dahlen has lived in Portland for 45 years. She says she's lived through a lot of what was written on the yellow.

"There are a lot of things written on the yellow that I knew nothing about, so it was really an education for me," Dahlen said.

She and her daughter Tiffany came to see the street art in person.

"We need to know where we've come from so we don't repeat it. Good to know so we can teach our kids," Tiffany Dahlen said.

Lloyd said he didn't ask permission from the city. The city says they have no immediate plans to remove the mural.

The mural is a reminder of what's happened in Oregon's past so we don't repeat it in the future.

"I think we all make history, whether we mean to or not. All of us are part of  the story of the rest of us. By relating the events of this area and this region to this very bit of ground, it highlights how much each of us has a choice in what we be a part of," Lloyd said.

He says the story of Portland is still being told, just like the unfinished piece of street art on North Edison Street in St. Johns.

"We are all apart of a longer story. It started before us, it will continue after us and we only can control the portion that's in front of us."