Protesters tore down 3 statues of US presidents in Portland last year. What happened to them?

The statues of Washington, Lincoln and Theodore Roosevelt are currently in storage to be assessed for damage. A review will help decide if they'll be put back. 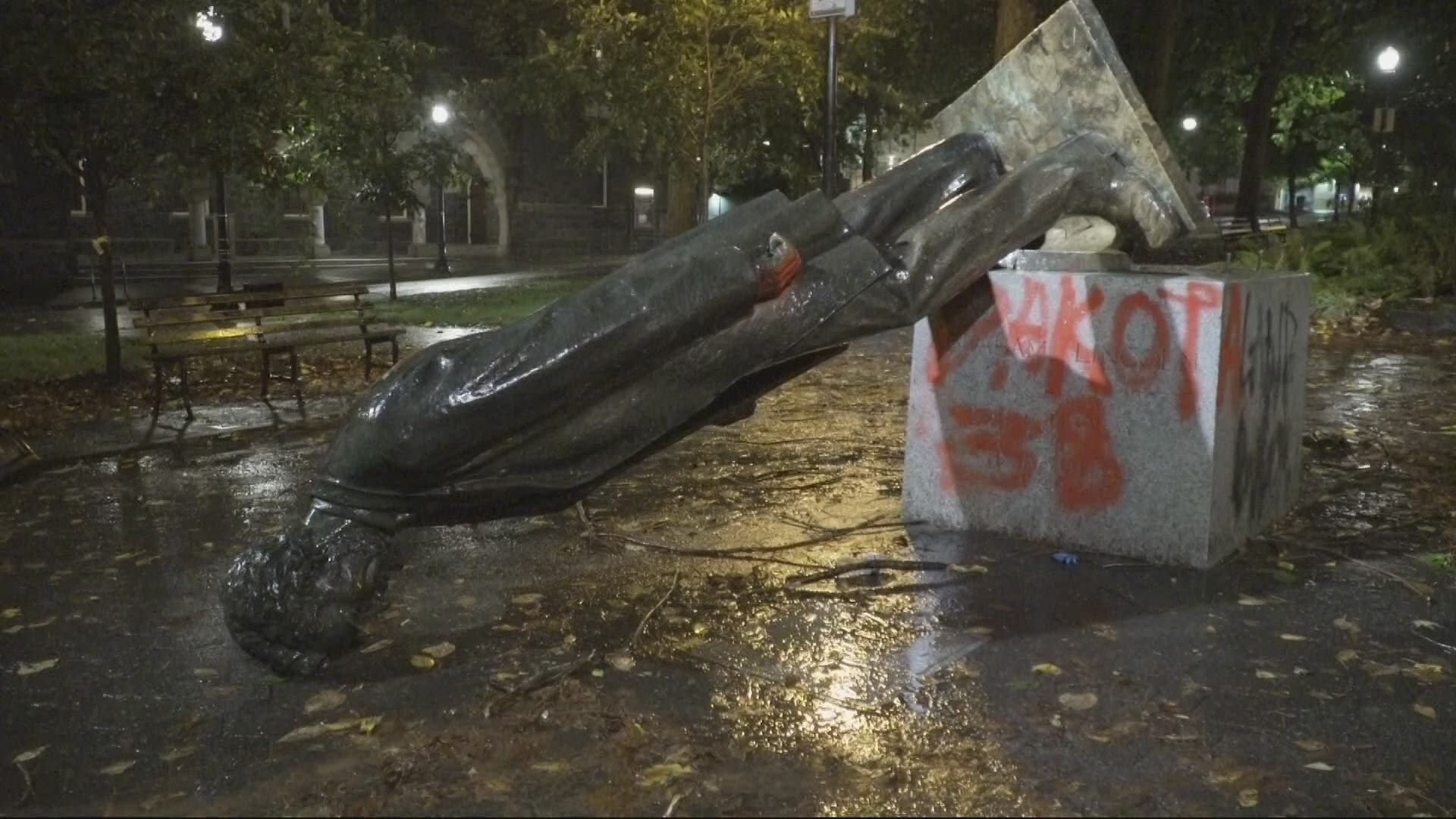 PORTLAND, Ore. — In the midst of last year's nationwide reckoning for racial justice, protesters in Portland physically removed three statues of former presidents George Washington, Abraham Lincoln and Theodore Roosevelt. But where did those statues end up, and will they ever return?

Kristin Calhoun with the Regional Arts and Culture Council (RACC) said the statues were put in storage to be assessed for damage. The council is a nonprofit that works with the city of Portland and Multnomah County to collect and take care of government-owned artworks, including statues.

She said last year’s racial justice protests prompted the RACC to update its policy for accepting and removing artwork like statues.

"What we realized while we were looking at the policy again last summer, that we didn’t have anything in those policies that contemplated a moment like this," said Calhoun.

The updated policy notes artwork "significantly at odds with values of antiracism, equity, inclusion" can be removed.

"So we felt like we needed to do that, get that in the policy then go into the review process," said Calhoun.

That process involves looking at different factors like cost, damage and location to determine if the statues should go back up. For one, the George Washington statue was on what became private land and the current owner doesn’t want it.

Terry Tymchuk, executive director of the Oregon Historical Society, said the values and policies of the presidents come into question.

"Washington, one of the wealthiest plantation owners of his time, was a slave owner," Tymchuk said.

He said Lincoln also did not regard African Americans as equals despite signing the Emancipation Proclamation to free slaves.

"At one point his philosophy was that they should be colonized in Africa, sent to Liberia,” said Tymchuk.

"Neither did he recognize Native Americans, the Indigenous people as equals" said Tymchuk. "Same thing with citizens of the Philippines, Cuba and from Latino backgrounds, Asian- American backgrounds.”

The RACC will decide which statues it believes should stay and will send those recommendations to the city of Portland. But Calhoun said that doesn’t necessarily mean the city will remove all of them.

"We’ll go through the process, and that process will have community engagement in it," she said.

She said conversations will be centered in communities that have not historically been represented in public spaces.

The review process for the statues is going on now to ensure Portland's public spaces are "representative of all our community, not just some of our community, "said Calhoun.

It’s uncertain how long it will take to reach a decision. Until then, the three statues will stay in storage.

RELATED: VERIFY: Why Lincoln and Roosevelt's statues were targeted by protesters