E-scooter companies say they're sanitizing them, some deploying self-cleaning adhesive, and there are more available to ride now since the pandemic started. 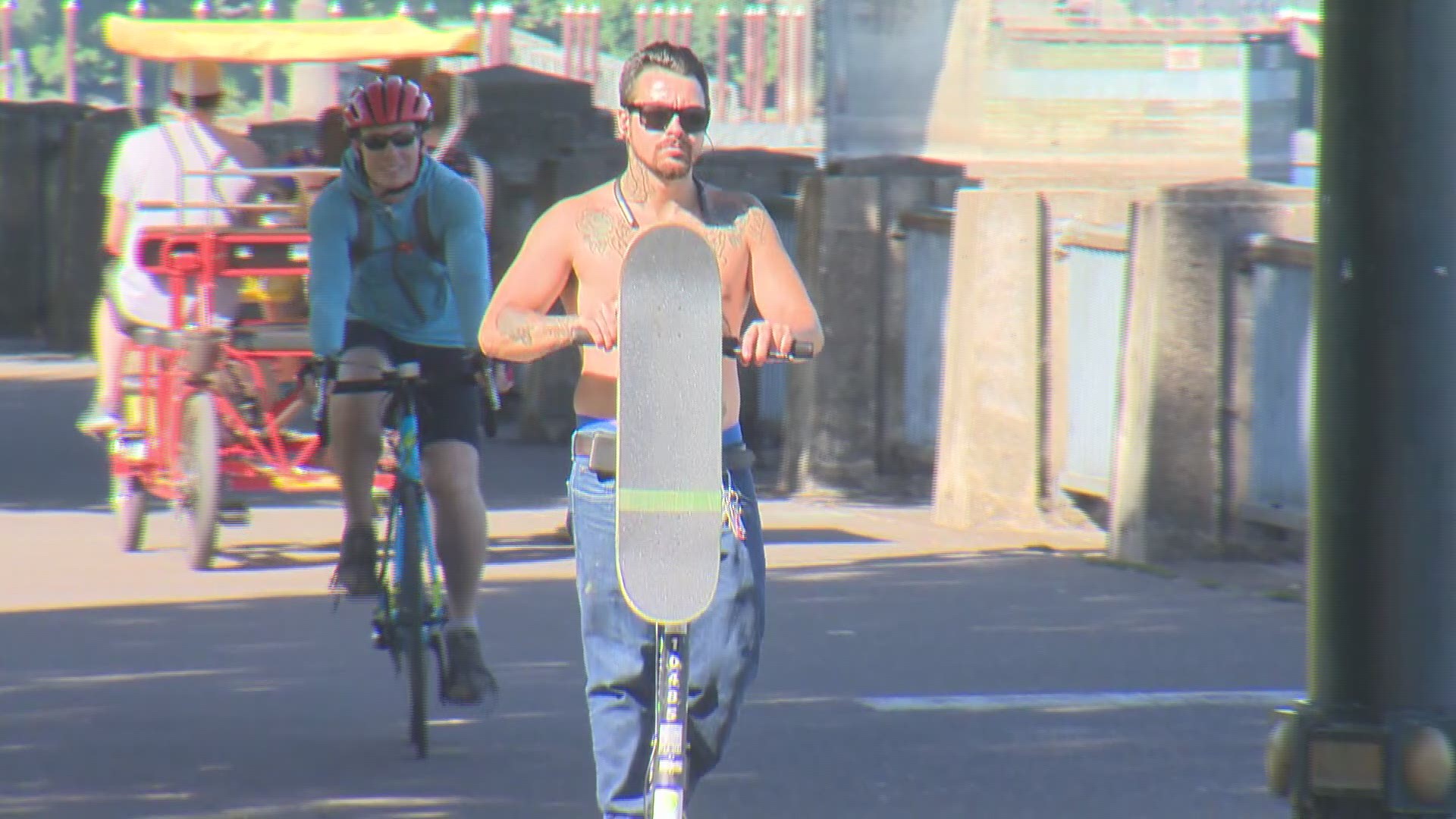 PORTLAND, Oregon — When the coronavirus pandemic first started, and Oregon was put under a stay-at-home order, ridership of buses, Max trains and ride-sharing services like Uber and Lyft, plummeted. They still haven't recovered, with just a fraction of the normal ridership feeling comfortable enough to take them again.

According to two of Portland's five e-scooter companies who commented to KGW, ridership has ramped back up since the shutdown orders were lifted. At least one company, Bolt, says ridership on her app is higher now than before the pandemic.

First though, let's talk about cleanliness and sanitation, because many people certainly have qualms about touching a public surface, left out in the open for anything to happen to on a good day. But Portland's e-scooter companies are doing various levels of regular sanitization.

We bumped into Crystal Thomas, who works for Spin scooters. By 8:00 o'clock every morning, she has to have 15% of their 950 scooters parked east of the 205 freeway as part of the city's equity clause.

She can haul 60 at a time in her work van to go re-charge and sanitize at their warehouse.

"We spray down every scooter. It's a bleach and water solution, very basic but very strong and efficient." Thomas says she sprays them when she puts them in the van, and then they are sprayed with disinfectant at the warehouse before they're brought back to the streets.

Bolt has gone even further, applying handlebar and brake lever stickers that attract UV light to oxidize bacteria, effectively self-cleaning when in the sunshine.

"The people riding our scooters can understand and appreciate where they're putting their hands, are the cleanest places on the scooters," VP of Operations at Bolt, Will Nicholas, said. Not all Bolt scooters have those sticker wraps yet. We spotted several downtown that didn't have them. They're working to get the entire fleet covered in a month's time.

Credit: Bolt
The nano-septic sticker wraps on Bolt's e-scooters attract UV sunlight to oxidize bacteria, acting as a self-cleaning method when left in the sun.

Bolt says because they use snap-on replaceable batteries, workers are sanitizing each scooter more often, and in some cases between rides, each time they put on new batteries.

Like you would expect, e-scooter ridership plummeted when the stay-at-home orders came down. Nobody was going anywhere. Nobody wanted to touch public surfaces.

But now, at least according to Bolt, their numbers are much better. "Since early June, we've seen a steady increase that's outpaced the ridership that we saw at the end of 2019 and early 2020," said Nicholas of Bolt.

Crystal Thomas says her company Spin had 600 scooters available in Pdx last year. Now, she says, they hover around 1,000.

Lime had about 300 on the roads when we checked their app on a Thursday morning. Bolt has just under 200 in the Rose City. Razor has hundreds too. And on their app, at the bottom is a dialogue box reading: "By order of the City, riding is temporarily prohibited between 8 p.m. and 8 a.m. in certain areas of downtown Portland." It's because of the protests. The scooters just won't work in that small geo-fenced area.

Portland's Bureau of Transportation says scooter companies aren't deploying as many as they could: The week of July 13-17 the average number of scooters for rent was 1,683, which is well below the current maximum fleet size of 3,115 total scooters.

"Despite the fact that ridership hasn’t returned to 2019 levels, PBOT believes that shared scooters and shared bikes have a role to play in responding to Covid-19 because they provide an outdoor, healthy transportation option. We look forward to seeing how e-scooters help meet community needs, as we look to reopening," spokesman Dylan Rivera told KGW.

Bottom line, bring your own wipes and hand sanitizer, but know that riding the streets solo is back and stronger than ever.

One interesting note, Thomas says Spin scooters are now about 50% heavier than they used to be. It's to make it harder for vandals to throw them in the river, up into trees and generally break, steal or vandalize them like we've seen over the past year.