Portland transportation officials have issued more than 500 warnings and penalties since April, and Disability Rights Oregon has gotten hundreds of complaints. 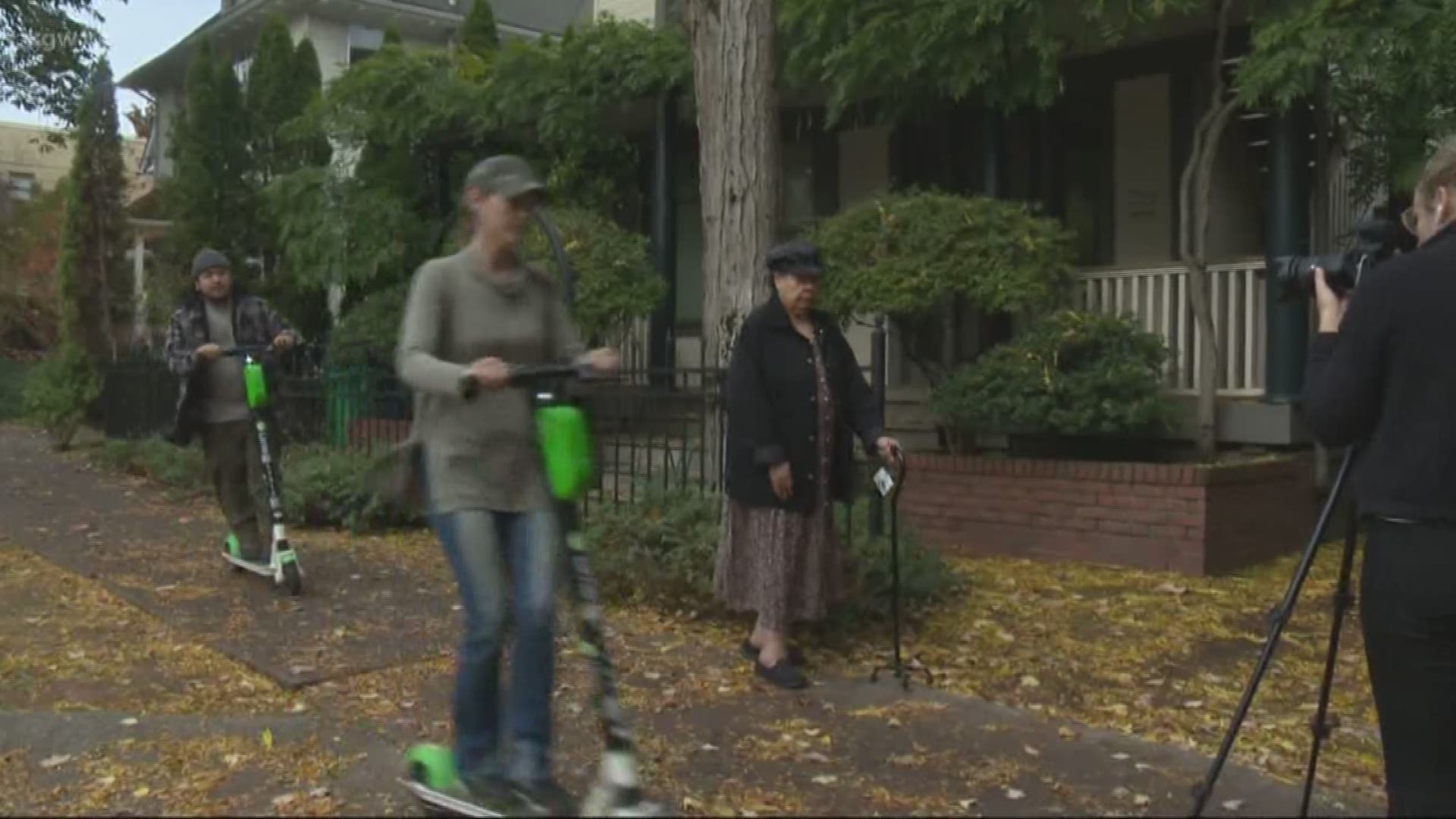 PORTLAND, Ore. — E-scooters can be a convenient way to get around Portland. But they can also be inconvenient and even dangerous when used the wrong way.

So the Portland Bureau of Transporation, Disability Rights Oregon and Lime Scooters are teaming up to make sure riders know what not to do, and why.

They’re sending the message through a video they shot in Northwest Portland on Monday morning. They plan to push the video out on social media and post it to their websites.

Not only are those two things against the law in the city of Portland, but they're also hazardous for people with disabilities – and pedestrians in general.

Imagine if you used a wheelchair or mobility device and have to get around a scooter, or a pack of scooters, parked in the middle of the sidewalk. Or imagine you're blind or vision-impaired and can't see a scooter whizzing past you. Either scenario could lead to you falling or getting hit and getting seriously injured.

In Portland, you’re supposed to ride e-scooters in the street, or in bike lanes where present. As for parking, park as close as you can to the curb in what’s referred to as the “furnishing zone,” an area where you’ll see trees, landscaping or street lights.

Be sure not to park them on curb ramps, which provide accessibility for people with disabilities. Park scooters away from buildings as well; people who use white canes need to run their canes along buildings in order to navigate.

Lime general manager Jeremy Nelson says you have to leave at least 3 feet of space open for people to get by.

When the city of Portland rolled out an e-scooter pilot program last year, Disability Rights Oregon got hundreds of complaints from people with disabilities and from seniors. When the group learned the second pilot was in the works, legal director Emily Cooper says they reached out to the city and met with them to express their concerns.

Among their asks: Ticket people who break the rules by riding on sidewalks, and increase the fines.

“Our primary concern is safety. Our sidewalks are supposed to be free and equal for everyone to move about freely in our city so that was what we really wanted to fix with the second pilot,” Cooper said. “We really think if users really understood what was at stake by riding on the sidewalk or parking poorly they would understand and stop doing it.”

The city can crack down on people violating city code around e-scooter riding.

PBOT staff can take photos and jot down the numbers of the front of the scooter, along with dates, times and locations of where they saw someone breaking the rules. Then they work with the e-scooter companies to issue the warning or fine to the rider.

Join the conversation! Have you had issues with e-scooters?

“The majority of instances where a rider is getting a report they’re not doing something right, they’re unaware," Nelson said. "So it’s a great opportunity for us to tell them what they should be doing and how that differs from what they had done. And we haven’t seen actually anybody with repeated violations."

Transportation officials say they've issued more than 500 warnings and penalties since April. But the challenge with enforcement is PBOT patrollers have to catch someone in the act.

You, personally, can contact the e-scooter company directly if you see an issue and want to report it. According to the city, companies are required to report to PBOT every month regarding complaints and reports submitted to them. The bureau of transportation says they audit each company and the complaint system regularly.