Northeast Skidmore Street will remain closed between 22nd and 25th Avenue for 1-2 weeks as crews rebuild the road after replacing the water main. 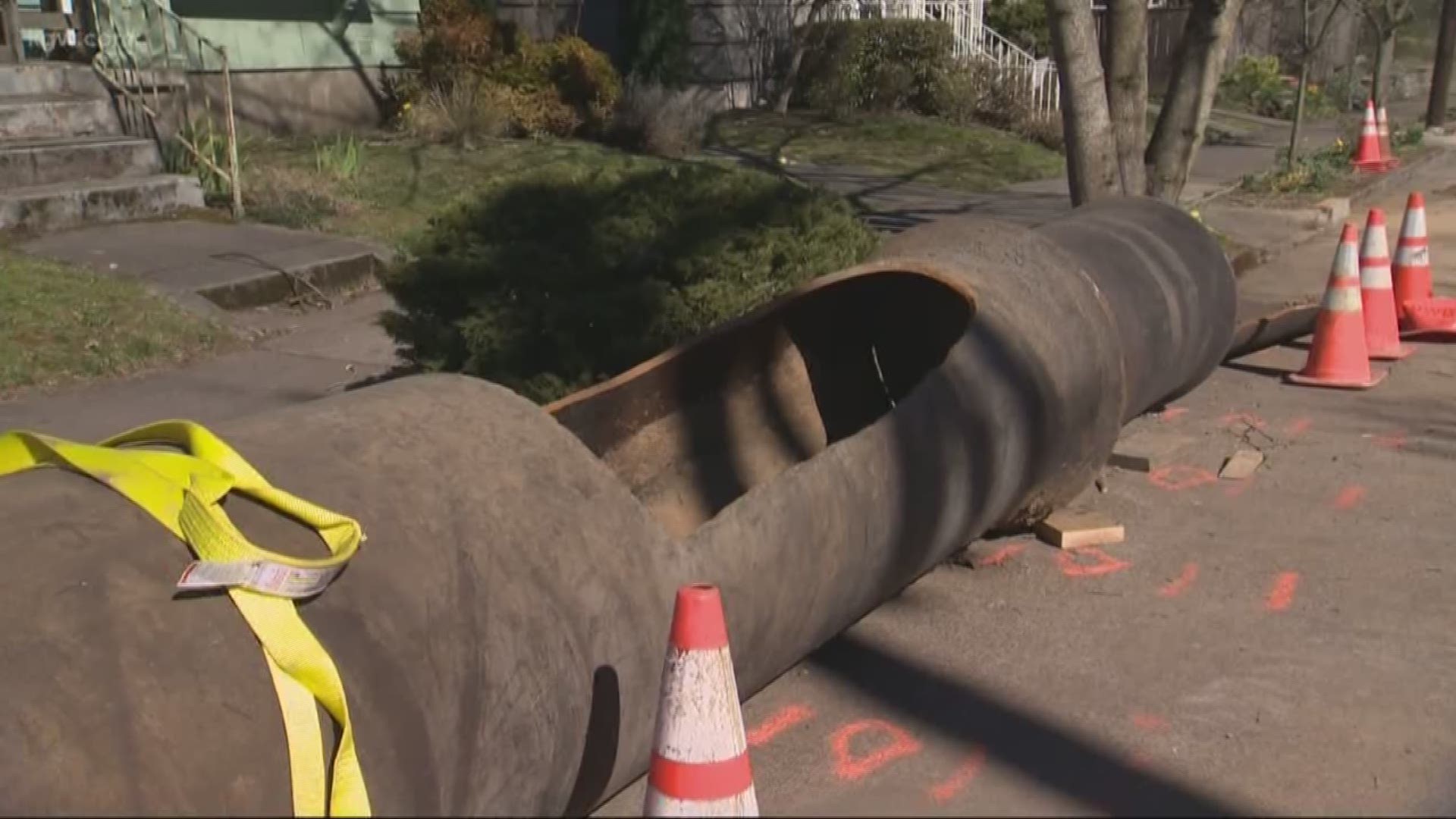 PORTLAND, Ore. — Portland Water Bureau crews repaired the 30-inch line that broke Saturday, sending millions of gallons of water into the streets in Northeast Portland. The pipe was more than 100 years old, the Portland Bureau of Transportation reported.

The cause of the break has not been determined, but age may have been a factor, the water bureau said. A nearby construction project is also suspected to be a factor.

“This was a very rare event and the largest main break we’ve dealt with,” said maintenance and construction director Ty Kovatch.

"It's exactly right next to where a recent construction project happened, and it doesn't necessarily mean it's anybody's fault, or not, it just means it took a stable situation and they had to excavate to get around it and that can contribute to main breaks, in addition to age and temperature and soil conditions," Kovatch said.

Crews spent the day Sunday replacing the water main and cleaning up debris in the streets. PBOT also brought in vacuum trucks to clear storm drains and sewer lines so that the stormwater system is clear and ready for any rain in the coming weeks.

Northeast Skidmore Street will remain closed between 22nd and 25th Avenue for 1-2 weeks as crews rebuild the road after replacing the water main. Only local access will be allowed, PBOT said.

“We’re actually going to put asphalt down. It's a road that had concrete but we're going to put down asphalt instead which will make it easier for us to repair in the long run,” said PBOT spokeswoman Hannah Schafer.

Crews worked Saturday night and into Sunday morning to reduce water flow from the break.

AJ Kleffner and his wife were at a birthday party Saturday when they got a call from their neighbor to come home.

“It was literally a waterfall down the driveway,” said Kleffner.

The father of two showed us cellphone video of thousands of gallons of water pouring into the driveway and into his garage and basement.

He said he’s already been contacted by the City of Portland about paying for damages.

“On a scale from 1 to 10. This is maxed out. This is about as bad of water damage as you can get,” said Richard Brown of Moving Forward Restoration

Over 10,000 customers were without power most of Saturday including dozens of businesses on Alberta. About 10 customers had water-related damage to their equipment that prevented service restoration. Customers with damaged equipment will need to consult a private electrician before the company can restore service.

Any customer without damaged equipment, but still without power should call the company’s outage line at 1-877-508-5088.

“Whiskey is in bottles, so that’s not a problem. So, come down to O’Leary’s, the water won’t stop us today,” O'Leary said.