The boy told the 911 dispatcher, the bus driver "she was drunk. Like, passed three red lights and got on the side road by the 76 and there's still kids on there." 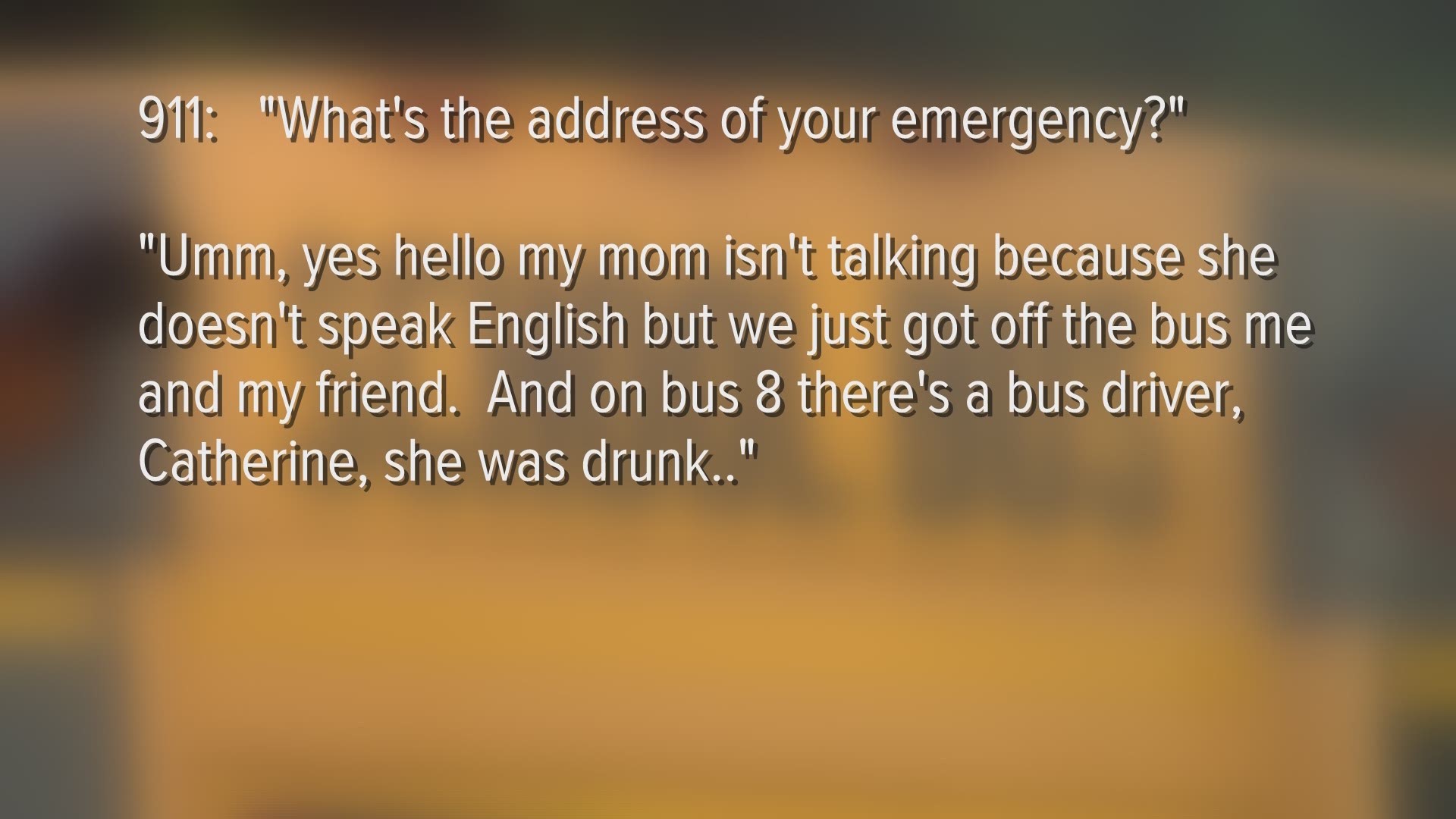 LONGVIEW, Wash. — A young student called 911 to report that his Longview Public Schools driver was drunk and had run red lights.

Police later arrested the driver, Catherine Maccarone, 48, for driving under the influence in  the September 12th incident and two counts of reckless endangerment. She drove twice, once transporting high school students and also grade schoolers.

No children were on the bus when she was pulled over in the 2900 block of Nichols Boulevard.

The child got home and told his mother about the driver. The mother does not speak English well and told her son to call 911.

The boy told the 911 dispatcher "She was drunk. Like, passed three red lights and got on the side road by the 76 and there's still kids on there."

The dispatcher asked how he discerned the driver's condition.

The driver was usually very strict about student behavior on the bus, he answered. On that Thursday, she gave the students more leeway, letting them sit where they wanted, the child said.

"Her eyes, you could tell she was drunk. Her breath sort of smelled like alcohol" he said.

The driver also cussed at the kids, the child said. Parents told us she was blowing them kisses.

When police pulled her over, they could smell an “obvious” odor of intoxicants coming from the driver, Maccarone. She was arrested and taken to the Cowlitz County Jail.

According to a police report on the incident, Maccarone's BAC was a little more than .09. 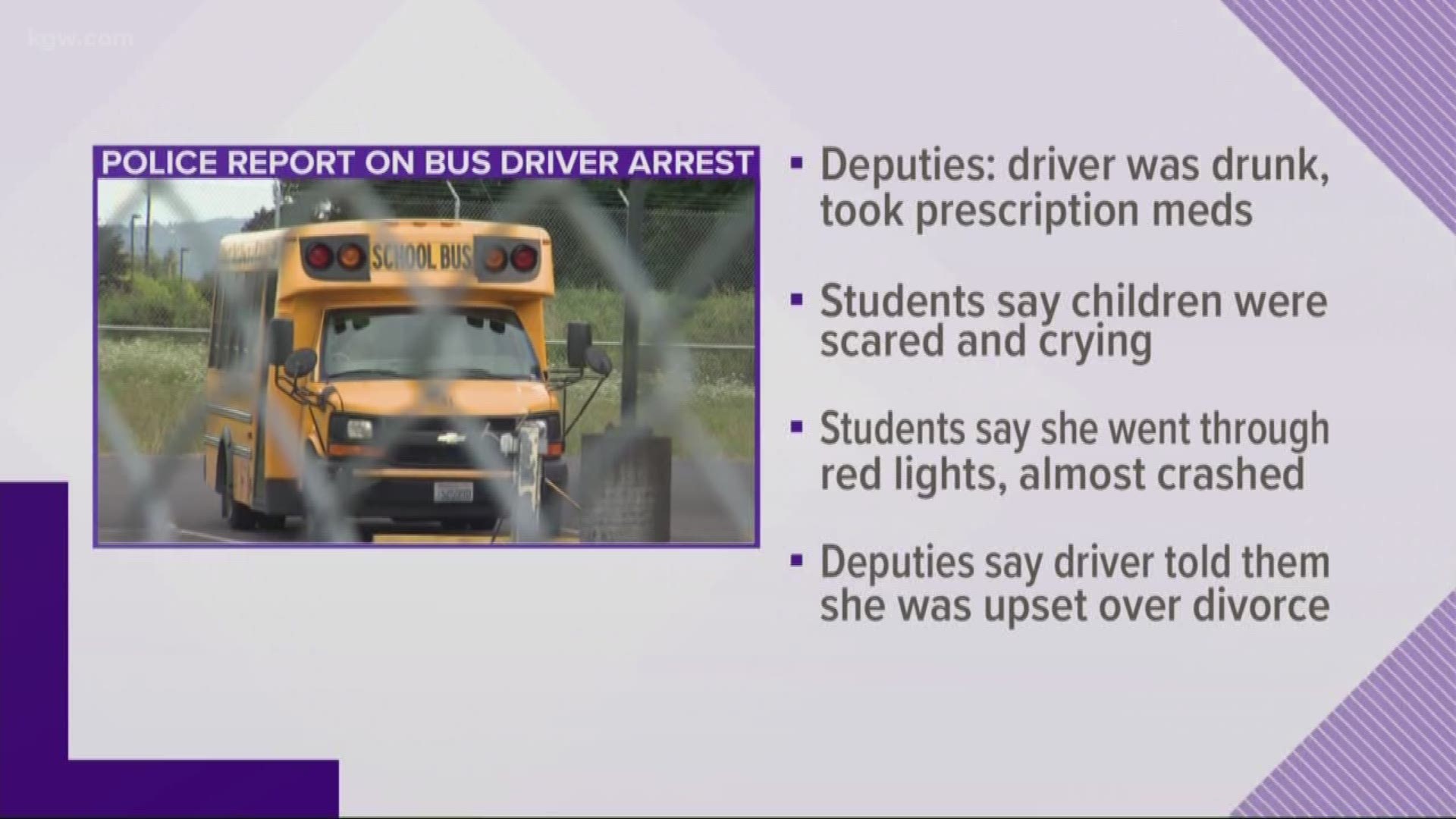 The boy who called 911 told police that children on the bus were scared and crying. Two kids attempted to get a scared friend to come off the bus at their stop but Maccarone wouldn't allow it and drove off.

Maccarrone had prescription medications in her purse and admitted to taking them, however, she denied allegations that she was driving under the influence when she was arrested. She told officers she was upset over her divorce.

The two routes she drove included at least 90 students.

KGW's Morgan Romero spoke with the mother of the 5th grader who called 911. She was worried about talking on camera but said she is very upset over what happened. She told us she and other parents send their kids to school believing they'll be safe and protected.

A dispatcher made contact with the school district's transportation manager to explain the situation. When the dispatcher described the student's account, the manager responded by saying he previously asked employees about Maccarone because she is new to the job and noticed she has "jerky movements."

"I asked everybody right off the bat and I was like, is that normal for her? And they were like, 'yeah, it’s Catherine,'" he told the dispatcher. "I’d rather err on the side of caution but everyone has always told me: that’s Catherine, that’s the way she acts."

The transportation manager said he met with Maccarone that morning and she did not seem intoxicated at all.

Longview Public Schools Superintendent Dr. Zorn says this is an isolated, albeit very unfortunate, incident; he says Maccarone has no history of anything like this, nor do any other drivers in the department.

"First of all, I want to tell our parents I’m sorry and as a system, this should not have happened. And, unfortunately, we had an individual make an incredibly irresponsible choice who is responsible for our kids. But I also hope [parents] take out of this that we’re taking action. We’re taking it very seriously and doing everything we can to assure it does not happen."

The district has already implemented changes in reaction to this, Dr. Zorn told KGW. They involve more concerted frequent and intentional face-to-face interaction between dispatchers, managers and drivers before drivers pick up keys in both the morning and afternoon.

Zorn believes Maccarone got drunk between her morning and afternoon routes. He said the contact that should have occurred when she returned to the dispatch center before starting her afternoon routes never did.

"What we've done as a result of this is we are taking a very hard look at procedures and processes we have in place and we have made adjustments immediately to assure this does not happen again," Zorn said. "We've increased scrutiny upon our drivers before they get the keys and in that pre-boarding process, we have tightened up."

Drivers go through extensive background and driving record checks and drug and alcohol tests. Dr. Zorn says drivers are randomly drug tested at different points throughout the year and if they ever suspect something is up - or an accident occurs - the district has the ability to breathalyze drivers.