Many who escaped the flames in the Santiam Canyon sought refuge at the Super 8 in Woodburn. They've stayed there for the past several weeks, until this week. 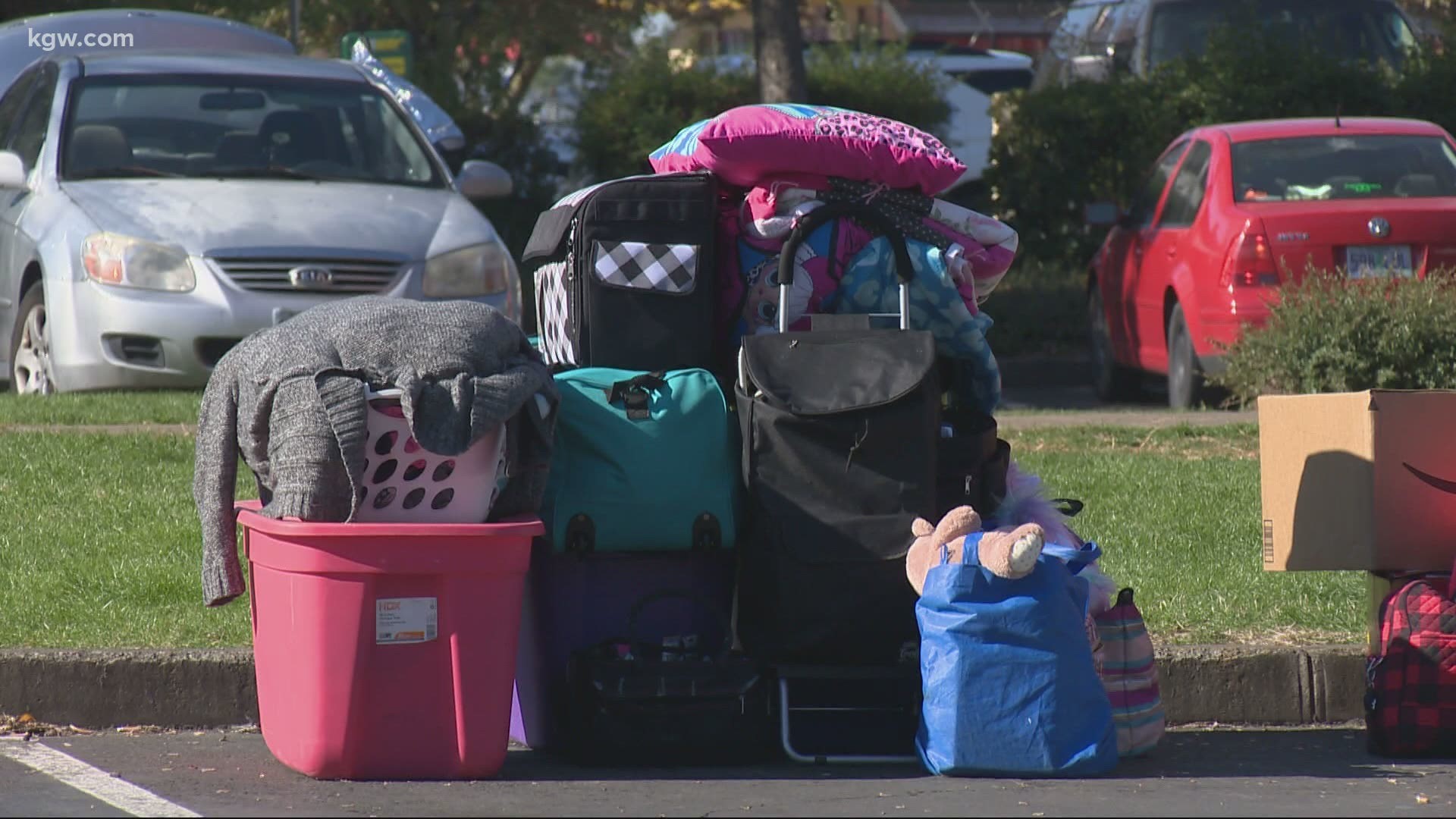 WOODBURN, Oregon — A KGW viewer reached out and told us the American Red Cross had booted wildfire evacuees from a Woodburn hotel Monday morning, leaving some with nowhere to go.

It's a little more complicated than that.

Amid devastating wildfires, the Red Cross provided resource assistance, referrals and recovery planning to nearly 9,500 families in Oregon between Sept. 7 and Oct. 19.

Many who escaped the flames in the Santiam Canyon sought refuge at the Super 8 in Woodburn. They had stayed there for the past several weeks, until this week.

"I'm grateful they gave us a place to stay," said Stephanie Lynch, who evacuated and lost her mobile home in Gates.

"When the Red Cross put us here they said we have time to find another place to go and everything else," said Chrissy Smith, who evacuated a house in Mill City.

On Monday, KGW spoke with multiple people packing up all they own after the Red Cross told them to check out of the Super 8.

"It's devastating," Smith said. "I have been crying for the last three days, nonstop."

Some say the Red Cross offered a few hundred dollars and a tent to ease the transition.

"The Red Cross is getting all these donations and they say they're helping; yes, they are helping some people but some people they're not," Lynch said.

Red Cross volunteers on site initially told Lynch and her family to leave but changed course while the KGW crew was there, saying the family could move to another hotel Wednesday.

RELATED: Volunteers send supplies to families whose homes were lost in the Santiam Fire

"Apparently I don't have to leave," she said. "It's different for everybody. It's just really confusing because people are getting different information."

It is different for everybody. KGW reached out to the Red Cross Cascades Region and discovered the issue is complicated and dependent on each person's individual situation.

The American Red Cross Cascades Region set up the shelter for wildfire evacuees at the Super 8 in Woodburn, funded by Marion County and supported by Red Cross volunteers.

Marion County has a contract to use the hotel as a COVID-19 isolation and quarantine shelter, and now needs to convert it back. According to a Red Cross spokesperson, Marion County directed the Red Cross to move residents with major damage to their homes, or those whose homes were destroyed from the Super 8 to another site this week.

The organization said case workers on site helped connect evacuees with other agencies, resources and offered money. The organization can't relocate people whose homes are not visibly damaged, who don't have extenuating circumstances, or who haven't connected with case workers to discuss their recovery plan even after repeated attempts.

Those leaving the hotel on Monday, like Chrissy Smith, fall in the group ineligible to receiving more lodging assistance. She was renting a room from a friend in Mill City but it's no longer available to her.

"We're still all trying to figure it out. I just got off work," Smith said. "I've been calling around trying to find another hotel."

But a few people told KGW off camera they had lost their homes and were still told to check out.

"It's very heartbreaking that they don't have anywhere to go to and the Red Cross is promising help," Lynch said. "They helped for a little bit. Now you get the boot, that's just what it seems like to me."

There are some hopeful developments for many wildfire evacuees.

Those who need a home will get more help from the state soon: Oregon lawmakers passed a $30 million proposal on Friday called Project Turnkey. It turns distressed motels and hotels into shelter space in areas impacted by wildfires.

It didn't come without contention; the $30 million approved was less than half of the money initially sought in the Oregon Legislature's Emergency Board committee hearing.