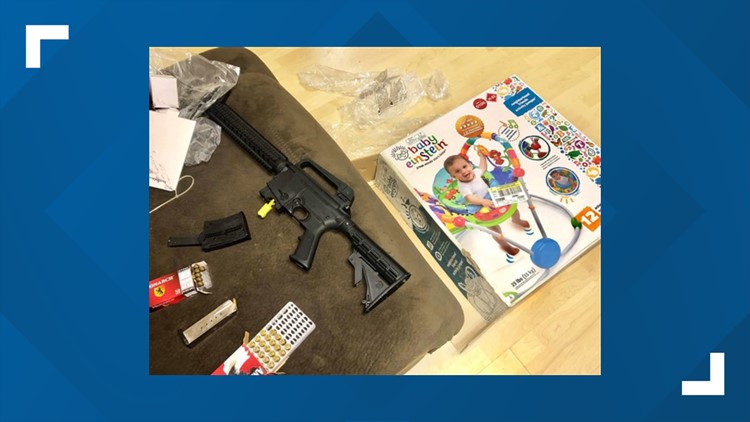 CRESTVIEW, Fla. — A Florida couple got more than they bargained for at their baby shower last week when they found a rifle in one of the gift boxes they had received.

The couple had been gifted a box appearing to contain an infant bouncer at their baby shower on Sunday. When they opened the box, they found a semi-automatic .22 caliber Mossberg rifle instead and called the police, according to a press release issued Wednesday by the Crestview Police Department, which responded to the call.

Authorities say the couple's friends had purchased the gift at a Goodwill store in Valparaiso, Florida. At the time of purchase, the box was taped closed, and the friends believed it contained a new Baby Einstein activity jumper. Officers concluded that the box could have been dropped off at any Goodwill donation box between Tallahassee and Pensacola before reaching its final destination in Valparaiso.

The rifle had not been reported stolen and there was no indication that it was associated with any criminal activity. After determining that the expectant parents were not felons, authorities initially let the couple keep the rifle on Sunday night but, upon further review, they requested possession of the weapon the following day. The couple voluntarily relinquished the gun to police.

All boxes given to Goodwill, even if they are sealed, are "supposed to be checked," according to a statement from Molly Collins, vice president of public relations for BowStern Marketing Communications, on behalf of Goodwill Big Bend. Collins added that Goodwill stores in the area handle about 100 gun donations every year.

The Bureau of Alcohol, Tobacco, Firearms and Explosives is investigating where the rifle was first bought and how it was donated to Goodwill. Kids2, the company that manufactures the activity jumper, has donated a new one to the expectant parents.