Minority or racial trauma has negative psychological effects on people of color and other minority groups, but experts say there are ways we can be better. 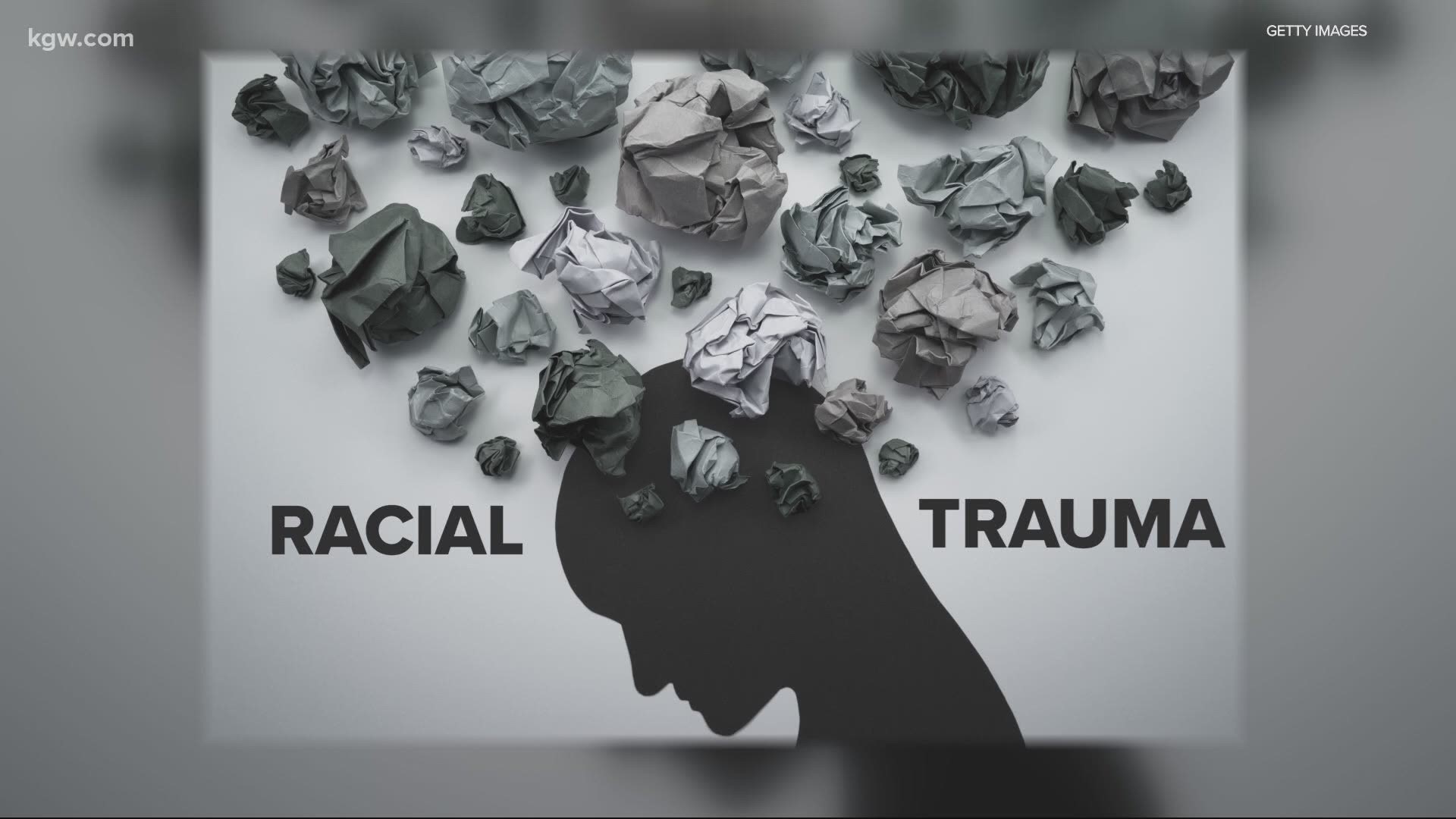 PORTLAND, Ore. — Unprecedented protests demanding racial equity and change have many of us digging deep, examining our own beliefs and the small actions we might not realize have a big impact on others.

Experts call it minority trauma or racial trauma. One person who is keenly aware of it is Gael Uy.

“I’m originally from the Texas panhandle, from Amarillo,” said Uy.

Growing up in Texas was tough for Uy. He remembers when he was a senior in college.

“I was getting to the point where I was so afraid of violence against me that I stopped eating or drinking while I was on campus so I didn’t have to use the restroom,” said Uy.

Uy is transgender and to give context, during his senior year of college, Texas was considering a bill that would limit transgender people’s access to bathrooms, making it so they’d have to use restrooms based on their biological sex. Now, he lives in Oregon and is attending medical school to become a doctor.

Credit: Gael Uy
Gael Uy during his White Coat Ceremony at the start of medical school

For those of us who aren’t transgender, here’s how he explains it.

“Most people have a preference. Do you prefer sandals or shoes,” Uy asked me during our interview.

My choice was shoes.

When it comes to minority trauma, Uy explained it in a way that’s easy to understand.

“To me minority trauma ... is the idea of recognizing that violence is a consequence of just existing,” said Uy.

He said even though he hasn’t experienced direct physical violence, others like him have.

“If you have to worry about violence being a consequence of you existing in a certain space, then that’s trauma,” Uy said. “That’s traumatic.”

He knows trauma is a heavy word.

“Violence is also a very heavy word, but skirting around the issue doesn’t make it any less real for the people who face it,” explained Uy. “So violence can be physical sure, but it can be emotional, it can be mental, it can be verbal.”

Dr. Monnica Williams is a clinical psychologist who specializes in topics such as ethnic minority mental health, racism and racial trauma.

“There are all kinds of marginalized groups that are experiencing their own form of trauma,” said Williams. “When I say racial trauma, I just mean PTSD caused by racism.”

Before the COVID-19 pandemic, she traveled the country training people on those issues.

“I give a lot of trainings on culturally informed therapy, diversity and inclusion, race and racism, how to be an anti-racist therapist, microaggressions,” said Williams.

She describes microaggressions as subtle acts of racism that are deniable. They can be anything from remarks, to behaviors, to environments.

Williams said they can be something as subtle as walking into a university and seeing pictures of presidents on the wall.

“They’re all white men,” said Williams. “So that could be a racial and gender microaggression because it sort of implies that smart people and leaders are only white men.”

Williams' parents grew up in the South during segregation, when Black people could not use the same facilities as white people.

“Someone might have argued: ‘Well, I don’t see the harm. There’s the colored fountain right over there. They can just use that,” said Williams. “You could argue that was a small thing. But it’s not really a small thing because it’s a symbol of all the things you can’t do.”

She said over time, people can absorb those messages that are both large and small, reinforcing inequitable social structures and negative beliefs. It builds and causes racial trauma.

“You start to think that you’re less than,” Williams said. “It’s very common for people of color to suffer from low self-esteem because they start to think there’s something wrong with them or they’re defective or they should be white, and as you can imagine this is very psychologically damaging for people when you start to really hate the skin you’re in and the ethnic group you were born into.”

“It’s insidious,” said Uy. “It’s not blatant, which is why it’s really easy to convince yourself that you’re not experiencing it.”

“Being Asian-American and being blamed for COVID-19, and being assaulted for it, or being Black in America and everything that comes with that, those are all traumatic experiences that if you don’t fit into those demographics you never have to think about,” Uy said.

For those of us who might not have to think about those issues - that’s privilege.

“Everybody is responsible for helping to make this better and particularly people with power and privilege because they have more advantages by virtue of the skin they were born into,” said Williams. “We all need to do constant work to be the people we want to be.”

Uy is on the path to the person he wants to be. He’s now in his third year of medical school.

“I’ve never seen the women’s restroom at my school,” said Uy. “I’ve heard they have scented hand lotion but I don’t actually know.”

Part of what motivated him to become a doctor was mental health and the health disparities between the queer population and those who aren’t queer.

“I didn’t realize there was such a big difference between being tolerated and being supported until I came [to Oregon],” Uy said.

In fact it was that support that put Oregon at the top of his list of where to attend medical school.

“[Being transgender] actually came up in my interview,” said Uy. “One of my interviewers was like ‘Oh, we love that here.’ I don’t think I’ve ever felt that safe during an interview before.”

But there’s still work to do, and he’s hoping his story will help spread awareness.

“You can’t actually begin to fix something if you’re not aware it exists,” said Uy.

Dr. Williams says even if you’re a good person and you’re against racism, you can sometimes still unintentionally commit racist acts.

She suggests we all dig deep, examine our own belief systems we might not be aware of and help our neighbors and friends who might not be as privileged.

“[It] means having people’s back even when it hurts,” said Williams. “If it doesn’t hurt, you’re not doing the ally-ship thing right, I’ll just say that. Because it isn’t easy. You are swimming against the stream, but that’s what’s going to happen for things to really change because if we keep doing things the way they’ve always been done, we’ll get the results we’ve always had, which is mass inequities.”

Help for people who have experienced racial trauma

For people who have experienced racial trauma for themselves, Williams has some helpful coping strategies.

For one, people can gain support from their community, like their family. They can also take short breaks from things that might expose them to more racism or negativity, such as social media. Williams said religion or spirituality can help comfort people and engaging in fun or pleasurable activities could also help to distract.

RELATED: Here’s why people care less as more people die and how that impacts the COVID-19 pandemic