As Congress works on COVID-19 relief bill, Merkley decries dysfunction in the Senate

Merkley said some kind of financial help for Americans is long overdue, and he hopes he can vote for the bill. 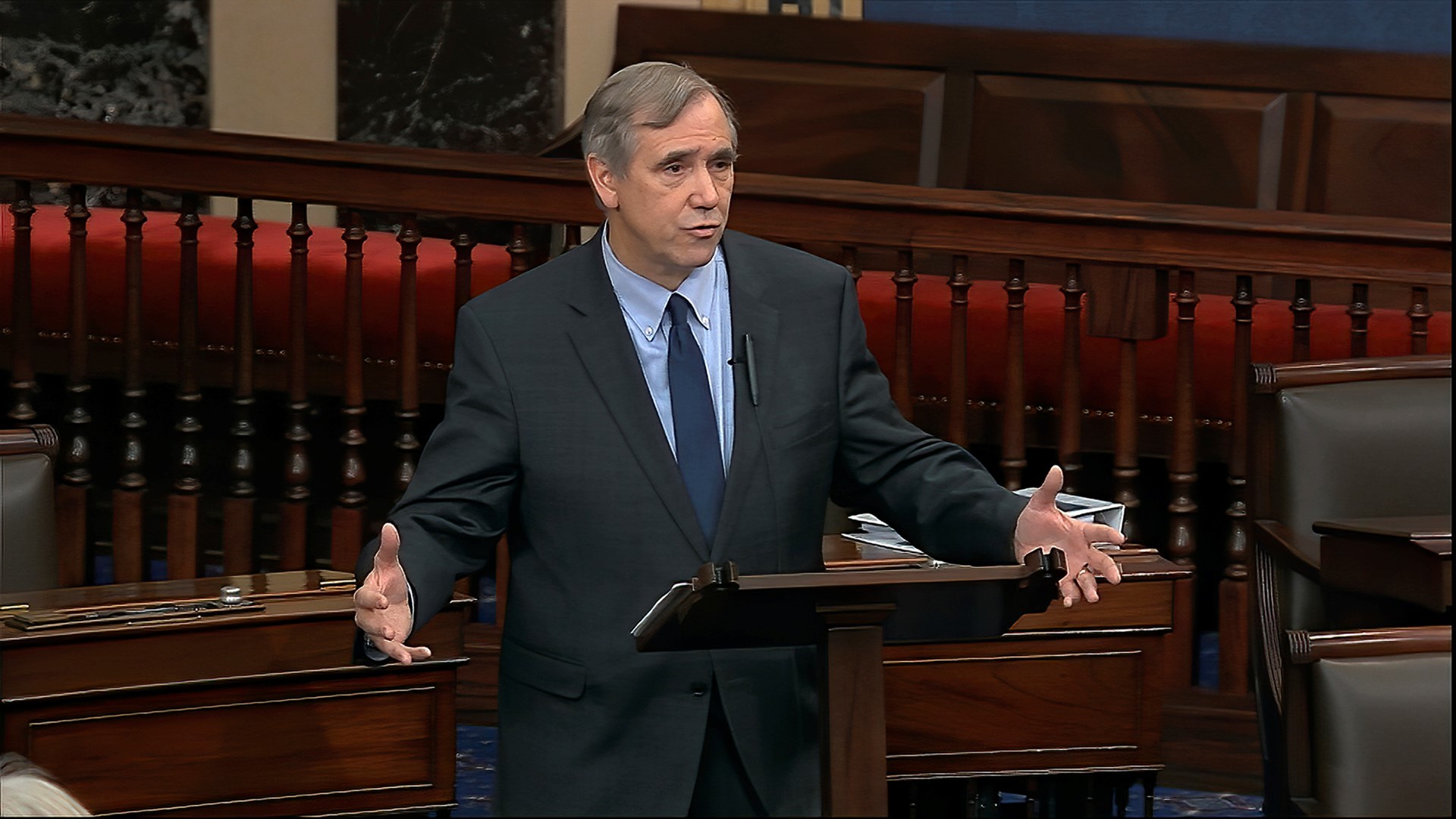 PORTLAND, Ore. — Congress will work through the weekend in an attempt to pass a COVID-19 relief package that is tied to a spending bill to keep the government running.

Oregon Senator Jeff Merkley was a guest on this week's episode of "Straight Talk." He said the proposed $900 billion allocated for COVID-19 relief is one-third of what Democrats wanted seven months ago, but he said some kind of financial help for Americans is long overdue, and he hopes he can vote for the bill.

He said there may be many elements in the bill added at the last minute that could affect his support for the package.

"Part of the problem with the Senate right now is it's not transparent," he said. "Deals are being cut and we won't know what the final bill looks like until shortly before we vote."

Merkley said he's working to find out more about what's in the bill.

"There could be some real shenanigans there that would affect whether I would support the bill or not. But, in the broad picture, I certainly hope I can vote for this bill," he said.

A financial bridge for struggling Americans

Merkley expressed hope the package will create a bridge for struggling Americans and businesses for the next four months, and possibly be followed by additional coronavirus legislation in 2021.

A number of CARES Act provisions Congress passed last March are set to expire at the end of December including; unemployment programs for 12 million Americans, the CDC eviction moratorium, state, local and tribal support, a federal foreclosure moratorium, and deferment of student loan payments.

"To do nothing would hurt so many people. That's a huge bag of coal in the stocking for millions of Americans," he said.

The proposed COVID-19 relief package is reported to include $600 in direct payments to individuals (Merkley wanted $1,200) under a still-to-be-determined income threshold, and $300 a week in jobless aid for 10 weeks.

The package is tied together with a $1.4 trillion funding bill to keep the government running through next September. Talks are set to drag out through the weekend and raise the possibility of a brief government shutdown.

"I think I share the sentiment of a lot of Americans and I know a lot of legislators share, we cannot leave DC before getting these bills passed," he said.

Sen. Merkley's wife, Mary, is a nurse who works with hospice patients and also tests many of them for COVID-19. He said he's seen the stress the pandemic has caused for health care workers first hand.

"She carries with her the stress that front-line workers carry of potentially carrying the disease home to her husband, our children, our neighbors, our mother who has been living with me or my sister," he said. "So, I've seen what they're going through, that stress."

Merkley said he felt a surge of joy when he saw the first people vaccinated in Oregon. He said 35,000 are expected to be vaccinated by the end of the week, and there should be more than 200,000 doses of the vaccine in Oregon by the end of December.

Why did U.S. pass up chance to buy more vaccine from Pfizer?

The New York Times reported when Pfizer offered the Trump administration the chance to lock in an additional 100 million doses of its vaccine, the administration passed on the opportunity. Now, supplies could become scarce in the coming months as the number of infections continues to rise.

"I am astounded that after we allocated billions of dollars to "Operation Warp Speed" that when we have the company coming to us with a silver platter asking, 'Are you sure? Don't you want another 100 million doses...to lock-in that option?' And to have the Trump administration turn them down. I have no idea what the circumstances were that led to that decision," Merkley said.

He pointed to the rising COVID-19 death rate in Oregon and the need for more vaccines.

"There was a point where I thought we could limit the total number of deaths from this pandemic in Oregon to 100. Now, that's happening every two to two and a half days," Merkley said. " So, we really need those vaccines."

RELATED: Over 100,000 COVID-19 cases reported in Oregon during pandemic

Auction for leases to drill in the Arctic National Wildlife Refuge

Merkley is also sounding alarm bells over what he calls a rushed process to lease drilling rights in the Arctic National Wildlife Refuge (ANWR) in Alaska.
On Dec. 1, the Trump administration announced it would auction oil and gas leases in the Arctic National Wildlife Refuge on Jan. 6, two weeks before President-elect Joe Biden is inaugurated. It's an accelerated timeline that would normally take much longer.

"This is just an obscene gesture about destroying one of the most magnificent jewels in our refuge system," Merkley said. "And it's been off-limits for decades and decades and decades. There's a lot of other places companies can drill. It's just wrong. They know it's wrong and that's why they didn't do it before the election."

The ANWR is a pristine area on the coastal plain in Northeast Alaska. It's 1.6 million acres, about the size of Delaware, and home to polar bears, grizzly bears, grey wolves, migrating caribou and other wildlife. Merkley said he and other senators are trying to stop the leases from every angle.

Merkley has also proposed two pieces of legislation to protect the Arctic National Wildlife Refuge. The "Stop Arctic Ocean Drilling Act" of 2019 would prohibit reckless, high-risk drilling in the Arctic. A second bill, "The Arctic Refuge Protection Act," would designate the coastal plain of the ANWR as wilderness and protect it permanently. However, Merkley lamented it would be difficult to pass in the current Senate. He said the fossil fuel industry has a lot of power.

"The fossil fuel world is basically the puppet master of the U.S. Senate at this point," Merkley said. "They are the biggest force behind McConnell (Senate Majority Leader Mitch McConnell) and Trump. So, we are going to try to slow this down until the next administration has a chance to say this should not happen. This will not happen."

Merkley said the future of his bills and others addressing the climate crisis depend on what happens in the Senate runoff races in Georgia on Jan. 5.

If Democrats win both races, they will take over majority control of the Senate. Otherwise, Republicans will retain control and Senate Majority Leader, Mitch McConnell, will likely stay in charge.

"They will determine what bills go to committee, what bills come to the Senate floor. So, we will see what happens Jan. 5. We really need a Senate that will work in partnership with Joe Biden and his team," Merkley said.

When asked about some Republicans' belief that a Republican-controlled Senate will provide a check and balance on too much Democratic power in Congress, and that it will prevent a radical socialist agenda, Merkley was quick to defend Democratic policies.

"I'm not sure what is radical about wanting good-paying jobs, investing not just in jobs, but in housing, health care, and education. The fundamentals for families to thrive," he said.

He said senators on both sides of the aisle are frustrated with how the Senate is functioning.

"You wouldn't recognize the Senate if you were to transport yourself to the 1970s or 1980s until now," he said.

In the 70s and 80s, bills were put on the floor, there were amendments and rarely a super-majority blockade. Today, he said, amendments are rare and blockades are common.

"So, the Senate has been stood on its head," he said.

As a result, Merkley said bills are done at the last minute, rolled out for a vote with little time to analyze and digest them.

"That lack of transparency is not accountable in a republic," he said.

Merkley is trying to change things by holding bipartisan discussions on how to restore legislative deliberation to the floor.

"This bipartisan dialogue might yield some effort to rein in leadership on both sides to say, we want to restore the Senate," he said.

With the nation still deeply divided following a bitter election, President-elect Biden has pledged to be a president for all Americans and to try to unify the country. When asked if he thought that's possible, Merkley said it will be a tough challenge. He said the Senate Republican caucus is determined to undermine Biden's legitimacy.

"We saw a deliberate effort to destroy the credibility and legitimacy of President Obama," Merkley said. "I think we'll probably see that again. So, I think Biden is going to try really hard, but I will say I think it's going to be very difficult."

Merkley described 2020 as a year that felt like a dark cloud was hanging over America, but he said there were glimmers of good moments during the year.

At Thanksgiving, family members shared positive highlights. For him, it was about his mother who is in declining health and splits time living with him and with his sister. He said she decided to take the opportunity in 2020 to write down stories about her life as a young girl growing up deeply impoverished in a small town in Kansas to share with generations to come. Other family members shared their stories of renewed relationships during the pandemic, and a deeper understanding of what's most important in life.

"So, I think there are moments we will take with us from a challenging year, as we look to a brighter, better 2021," he said.

Merkley also shared his hopes for the new year. His greatest hope is for the nation to conquer the pandemic and the economic impact it has had on Americans. He wants to see every American have access to a vaccine. Also on his wish list, a strong pivot to take on climate challenges and passage of the "Equality Act" before the Senate.

"It's passed the House. It's a bill I wrote in 2015 based on Oregon's "Equality Act," and it ends discrimination against LGBTQ Americans and ends the door being slammed in their face," he said.

He also hopes 2021 is the year America makes investments in infrastructure, health care, housing and education, all issues he calls the foundation for families to thrive.

"So, there's a lot to hope for as we look to the year ahead," he said.

Merkley had this closing thought for Oregonians as we close 2020 and look ahead.

"I wish you all a brighter and better 2021 in which we go forward together as a nation to take on a lot of challenges that have been neglected for too long," he said.