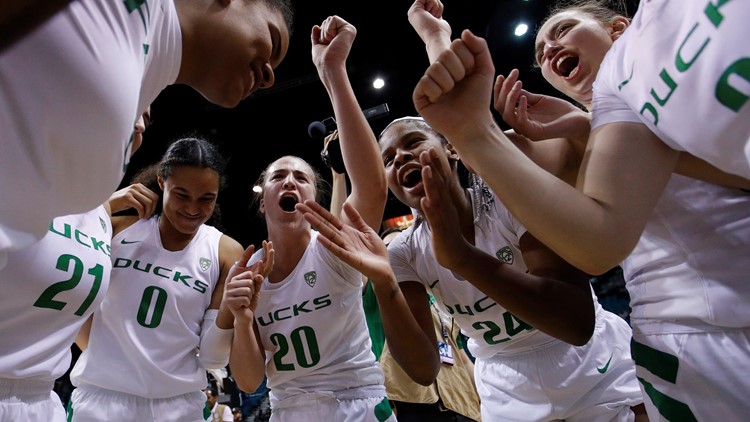 Photo by: AP
Oregon's Satou Sabally (0), Sabrina Ionescu (20), Ruthy Hebard (24) and others celebrate after defeating UCLA in overtime of an NCAA college basketball game in the semifinals of the Pac-12 women's tournament Saturday, March 9, 2019, in Las Vegas. (AP Photo/John Locher)

PORTLAND, Ore. — The NCAA women’s basketball tournament begins on Friday and three Oregon teams are in this year’s big dance.

Oregon, who was the Pac-12 regular season champions, is a No. 2 seed and will face off against another local team, No. 15 seed Portland State, in the first round on Friday. Oregon is looking to make its first Final Four. The Ducks reached the Elite Eight each of the last two seasons. Oregon is led by junior guard Sabrina Ionescu, who was named the Pac-12 Player of the Year for the second straight season and named an ESPNW first-team All-American.

Oregon's Sabrina Ionescu reacts after a play against Arizona during the second half of an NCAA college basketball game at the Pac-12 women's tournament Friday, March 8, 2019, in Las Vegas. (AP Photo/John Locher)
AP

Portland State is playing in the NCAA Tournament for just the second time in program history. The Vikings earned an automatic bid after winning the Big Sky Conference tournament championship in thrilling fashion. The school’s previous NCAA tournament appearance was in 2010.

Oregon State earned a No. 4 seed in this year’s tournament after finishing third in the Pac-12 in the regular season. The Beavers will take on No. 13 seed Boise State in the first round on Saturday. The game will be played in Corvallis. This is the sixth straight year Oregon State has made the NCAA Tournament. The Beavers went to the Elite Eight last season and went to the Final Four in 2016.