President Trump will speak to the press Tuesday afternoon as the U.S. continues to battle coronavirus outbreaks and amid strained relations with China. 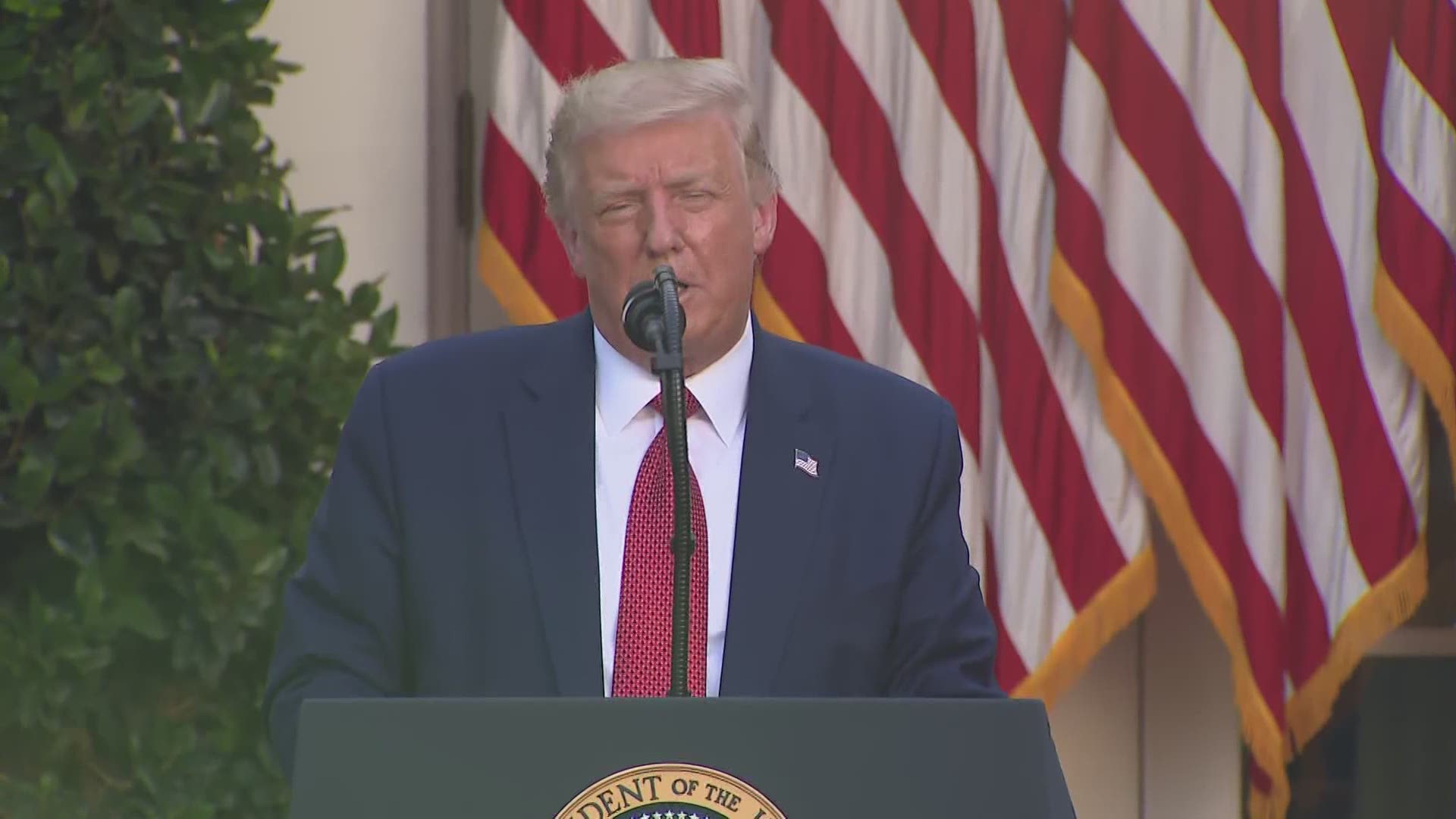 WASHINGTON, D.C., USA — President Donald Trump transformed an event that was supposed to highlight his China policy into an impromptu campaign rally, delivering an expansive and often meandering broadside against Democratic rival Joe Biden on trade, policing and his son's business practices, among other topics.

The Republican president traded the arena-style rallies he favors for the sun-drenched heat of the typically apolitical White House Rose Garden. And instead of a raucous crowd, Trump spent more than an hour Tuesday speaking in front of reporters.

The shift presented a challenge for a president who thrives on the validation of his supporters and uses their energy to propel his White House bid. But relenting to the urgent pleas of his political advisers to try to alter a campaign that has been upended by the coronavirus, Trump spent more than an hour framing the November election as the starkest choice in the nation's history.

“There’s probably never been a time when candidates are so different,” Trump said. “We could go on for days.”

It was a framing Biden himself embraces. Since the early days of his campaign, Biden has sought to portray himself as an empathetic, competent counter to the turbulence of Trump's administration.

The contrast was on display Tuesday when Biden unveiled the latest of a series of policy proposals, this one a $2 trillion plan to tackle climate change. Trump and his allies, meanwhile, have sometimes struggled to articulate their vision for a second term.

Trump seized on the plan to argue that it would make the U.S. “noncompetitive” with the rest of the world.

That was part of a broader effort to argue that Biden, who ran a relatively centrist campaign for the Democratic nomination, has become captive to the most progressive voices in his party.

“As vice president, Biden was a leading advocate of the Paris climate accord, which was unbelievably expensive to our country," Trump said. "It would have crushed American manufacturers while allowing China to pollute the atmosphere with impunity, yet one more gift from Biden to the Chinese Communist Party.”

He then delivered attack after attack against Biden on issues from energy to the economy, education to immigration. He drew heavily from the recommendations of the Joe Biden-Bernie Sanders Unity Task Force, in which Sanders, the runner-up for the Democratic nomination, secured key liberal policy proposals as Biden looked to strengthen his appeal to Sanders’ supporters before Nov. 3.

RELATED: China bans US lawmakers Marco Rubio, Ted Cruz and others over criticism

“The Biden-Sanders agenda is the most extreme platform of any major party nominee by far,” Trump said, suggesting it was “worse actually” than Sanders’ own as a candidate.

Trump’s comments came during a press conference called ostensibly to discuss his actions against China after it moved last month to undermine the autonomy of Hong Kong.

Credit: AP
President Donald Trump speaks during a news conference in the Rose Garden of the White House, Tuesday, July 14, 2020, in Washington. (AP)

The president has come under criticism for not taking a hard line against China, especially during the early days of the coronavirus pandemic, which ignited in the central Chinese city of Wuhan. His former national security adviser John Bolton recently claimed that Trump urged China’s Xi Jinping to help him win reelection.

But Trump said it was Biden who would not take a tough stand against China. He accused Biden and former President Barack Obama of allowing "China to pillage our factories, plunder our communities and steal our most precious secrets.”

“I’ve stopped it largely,” he added.

The speech came as Trump has been forced to reassess his ability to hold his familiar campaign rallies, days after his campaign scrapped its second attempt at staging them in the coronavirus era on Saturday in New Hampshire. Trump’s first, last month in Tulsa, ended up a disaster, with most seats empty as supporters steered clear of the indoor event.

And while it's not uncommon for incumbents to use the grandeur of the presidency to boost their reelection, it was rare for the political messaging from the Rose Garden to be so overt.

The move was the culmination of weeks of effort by his political advisers, who have encouraged the president to present a vision for what he might accomplish with a second term in the White House — or at least position himself against the Democratic standard-bearer's detailed policy proposals.

They expressed fear that the election was becoming a referendum on the divisive president and pressed Trump to paint the election as a dire choice between opposing futures for the country.

For months, Trump aides have expressed worry that the president's path to reelection is narrowing — and they concede privately that if the election were held today that the president would lose. They have said that Trump needs to be more disciplined in his messaging if he wants to overcome steep political headwinds from his handling of a trio of crises: the pandemic, an economic collapse and a national reckoning over systemic racism.

Trump had previously stuck to his “Sleepy Joe” moniker and leveled unsupported ethics allegations against the former vice president's son.