Two random, allegedly violent run-ins and an in-depth profile by the Seattle Times are shining a spotlight on a far-right political group called the Proud Boys. 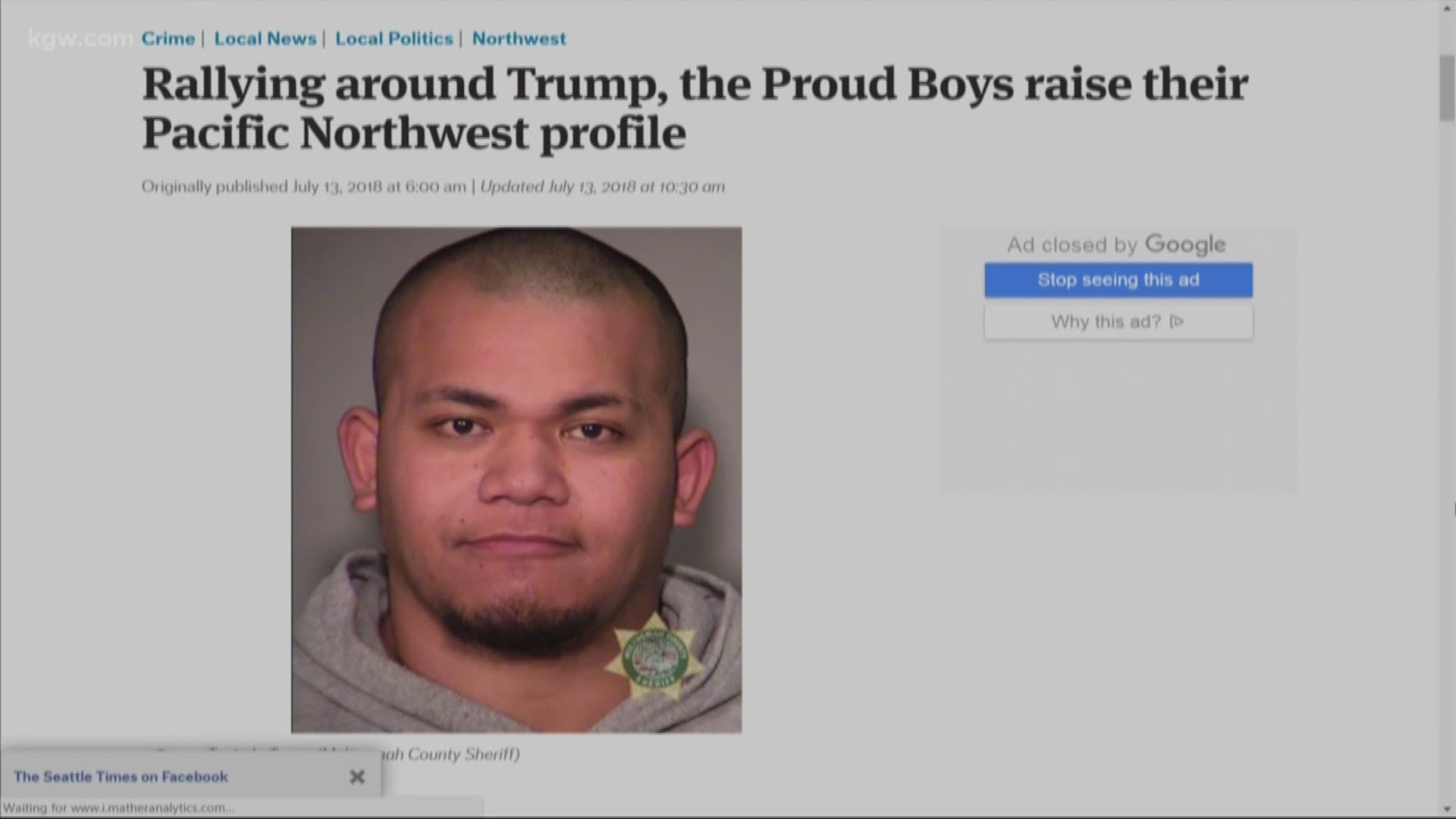 PORTLAND, Ore. — Two random, allegedly violent run-ins and an in-depth profile by the Seattle Times are shining a spotlight on a far-right political group called the Proud Boys.

The group, founded in 2016, has a heavy presence online and social media.

Their Twitter bio reads, “I am a Wester Chauvinist and I Refuse to Apologize for Creating the Modern World. The West is the Best!” Their website advocates goals like “abolish prisons," “give everyone a gun,” and “venerate the housewife." It also states, “Being proud of western culture today is like being a crippled, black, lesbian communist in 1953.”

The Southern Poverty Law Center describes the Proud Boys as a designated hate group “known for anti-Muslim and misogynistic rhetoric," whose “disavowals of bigotry are belied by their actions."

Tim Ledwith just knows them as the guys who punched him in the face in broad daylight.

“Some of these individuals, if they weren't violent, I'd feel bad for them,” he said on Friday. “They sound like complete fools.”

Portland police confirm they arrested Tusitala “Tiny” Toese, a self-identified Proud Boy, in connection with an incident on the afternoon of June 8 involving Ledwith.

“It escalated to them calling me homophobic slurs, to which I said, ‘F*** off’ and then, all of a sudden, I'm punched in the face,” he said.

As it turns out Ledwith's was one of two such incidents in recent weeks.

The other involved an African American teenage boy in Vancouver.

His attorneys told the Seattle Times, back in May, the boy was coming out of the Vancouver Mall when he saw men in a pickup truck a pickup flying a Confederate flag.

The boy yelled something derogatory about the president, and his attorneys told the paper two of the men chased him and threw him on the ground.

Police ended up charging the teenager.

Those charges are now reportedly in the process of being dropped.

At the June 30 rally, hours before his arrest, Toese said members of the Proud Boys were there to defend free speech.

Staff at the Western States Center, a local agency aimed at promoting equality and inclusivity, sent a letter to the Clark County prosecutor’s office about the May incident, advocating that charges be dropped.

“Everyone has a right to express free speech under the First Amendment. It’s a cornerstone of our democracy,” she said. “But what these Proud Boys and other far-right racist and sexist groups are doing goes beyond free speech. They are demonstrating a pattern of coming into our community with the express purpose of starting violent incidents and brawls.”