Saturday's rally was in response to a number of bills in the state legislature aimed at adding new regulations for gun owners. 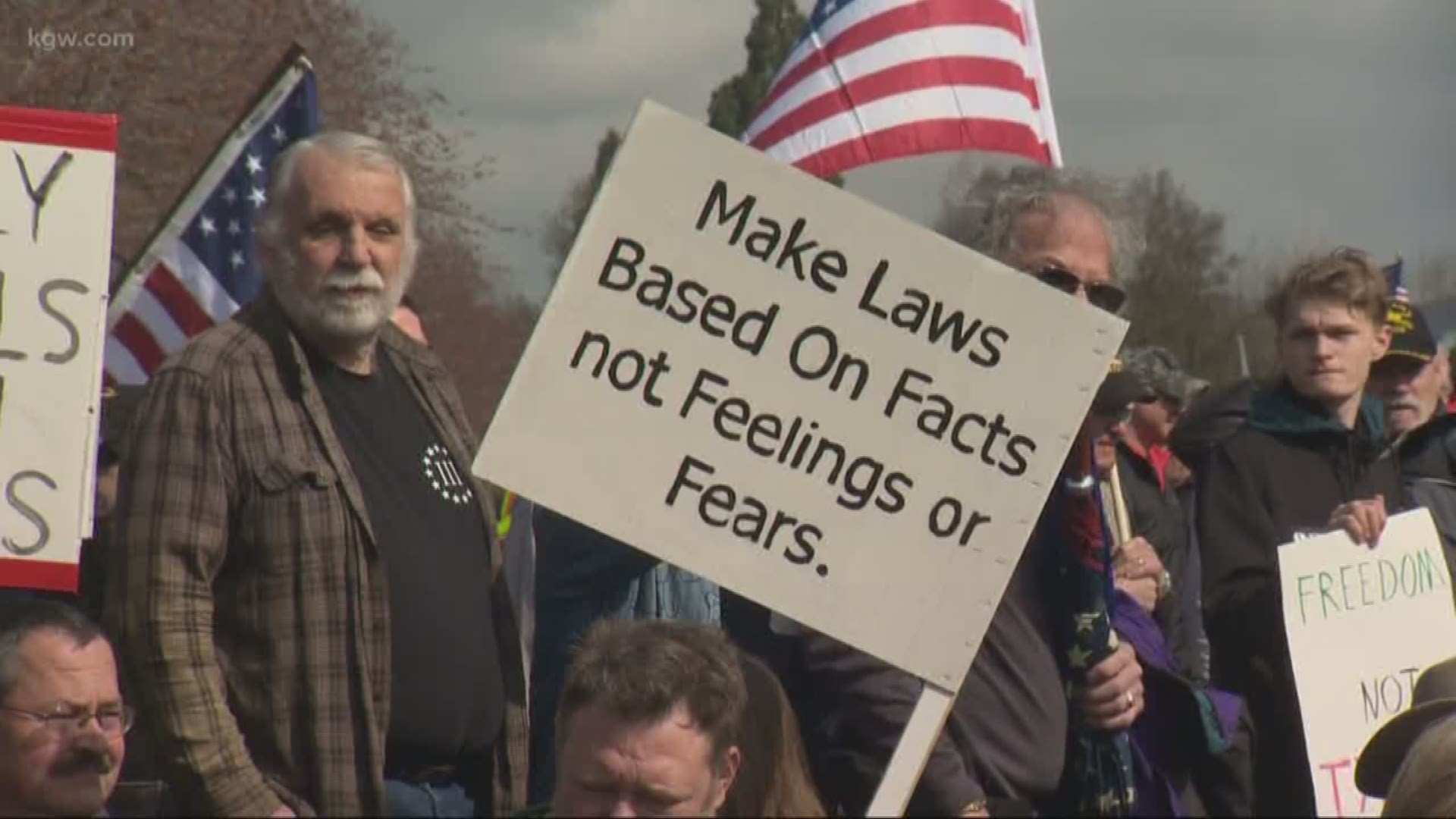 SALEM, Ore. — Thousands of people descended on Oregon’s Capitol Saturday to rally for their support of the Second Amendment.

The “Defend the Second” rally attracted people from around Oregon and elsewhere, supporters said.

Pam and Larry Hazlett traveled from their home in Bend to make their voices heard.

“We want to defend our Second Amendment rights and also our first at the same time,” Pam Hazlett said.

Oregon State Police Captain Timothy R. Fox said Sunday it was difficult to determine how many people attended the rally, but put the number in the thousands.

"I have heard a lot of different numbers. I have heard around 5,000 to 3,000. Depends on when the question was asked and who you were asking," Fox told KGW.

Organized by Oregon-based weapons manufacturers Radian Weapons and Noveske Rifleworks, Saturday's rally was in response to a number of bills in the state legislature aimed at adding new regulations for gun owners.

"The only purpose of this event is to remind our legislators that they work for us, and any continued assault on our Second Amendment rights will not stand," organizers said in the Facebook event page.

That includes Senate Bill 501 which, if passed, would require gun owners to get a permit before purchasing or receiving a firearm. It would require guns to be secured with a trigger or cable lock. Any lost or stolen guns would need to be reported within 24 hours, and the bill would not allow the transfer of a gun for 14 days until state police say the person is cleared to receive it.

The bill would also prohibit the possession of a magazine that holds more than five rounds, require a background check before the purchase of ammunition and limit ammunition sales, such that only 20 rounds would be able to be purchased within 30 days.

“The legislation is coming up. There's a lot of anti-gun legislation and we want to do our part to protect those rights,” Pam Hazlett said.

Gov. Kate Brown has made firearms legislation a priority and those backing the bills say it is a move to prevent gun violence.

Rep. Andrea Salinas, who represents the Lake Oswego area, is a sponsor of
Senate Bill 501. Salinas released a statement on Saturday’s rally.

“I’m supportive of those who rally and meet in support of their Second Amendment rights. But as the representative of over 300 of my Students for Change constituents, I’m supportive and proud to represent them as they seek solutions to keep themselves and their classmates free from gun violence. There is a balance that we can achieve in finding common-sense gun safety solutions but we must commit to listen to one another.”

The people at Saturday’s rally in Salem say this legislation infringes on their rights.

“If you're willing to give up liberty for safety, you really deserve neither. You need to protect your rights,” Larry Hazlett said.

Just blocks away from the Capitol, before the rally began, Republican Joey Nations met with supporters to kick off his campaign for Congress in Oregon’s 5th District. He spoke about gun rights as a priority for his platform.

“When you look at the infringement that's happening, not just in Oregon but nationwide, you're talking about the first one to go. So, when the Second Amendment is gone, everything else will follow,” Nations said.

There was a heavy law enforcement presence at Saturday’s rally. It remained peaceful.