There are still a lot of events where you can celebrate Black History Month in Portland. We've put together a list of one event per day through the rest of February. 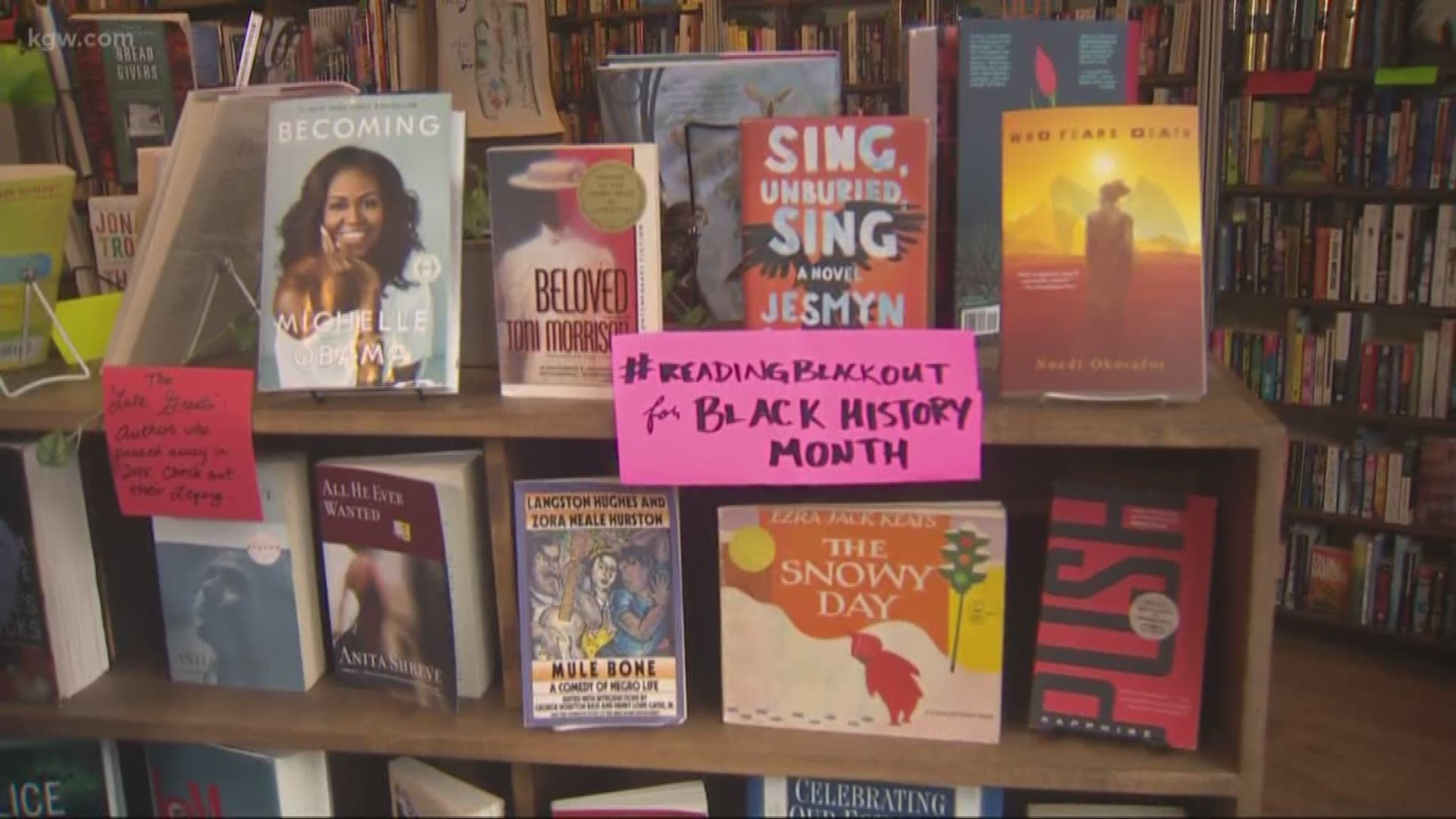 PORTLAND, Ore. — From jazz to poetry, book readings to movie screenings, gallery exhibits to traveling museums, there's still a lot left to do in Portland this February to honor Black History Month. Here's list that includes one event for each day.

(The text in italics comes directly from the event listings.)

February 14: Who I Am, Celebrating Me

This play, created fifteen years ago by Portland native Shalanda Sims and performed by youth and adults from the Portland metropolitan community, takes audience members on a historical journey through the Black experience, examining and exploring systems and the often overlooked and silenced strength, resourcefulness, resilience, brilliance, triumph, and contributions made by Black people to propel America forward.

February 15: The HeART Gallery at the Rockwood Library

An interactive experience of poetry, live music, visual art and more to share experiences and create dialogue about community and growth. The HeART Gallery uses the arts as a vehicle for conversation.

Multnomah County Library's Black Cultural Library Advocate team presents a special screening of the Ken Burns documentary The Central Park Five. This film from award-winning filmmaker Ken Burns, tells the story of the five black and Latino teenagers from Harlem who were wrongly convicted of raping a white woman in New York City's Central Park in 1989. This Peabody Award winning film chronicles the Central Park Jogger case, for the first time from the perspective of the five teenagers whose lives were upended by this miscarriage of justice.

In August of 1963, Dr. Martin Luther King Jr. penned his, now famous, Letter from Birmingham Jail. Written amidst racial divisions and turmoil throughout the country and within the Church, it remains a powerful and prophetic piece of writing that is relevant today. Dr. King called on his brothers and sisters in Christ to stand against injustice. In 2020, we recognize that there is still a need for the Church to answer that call.

The traveling museum will be exhibited at their local library for the month of February, as an extension of the City-wide, Black History Festival to take place in February 1-29, 2020.

The first Moroccan film to be selected at the Cannes Film Festival, Alyam, Alyam tells the story of Abdelwahad, the eldest son of eight children, who lives with his family in a small Moroccan village. He has bold dreams and a desire for a better future, and he wants to leave the village to work in France. The film reveals how his dreams become shattered, a story still relevant today.

This restoration is part of the African Film Heritage Project, created by The Film Foundation, FEPACI and UNESCO – in collaboration with Cineteca di Bologna – to help locate, restore, and disseminate African cinema.

February 20: Power to Heal: A Celebration of Black History Month

During the month of February, we honor and celebrate the achievements of African Americans, as well as pay tribute to the generations of African Americans who struggled with adversity to achieve full citizenship in American society. Join us for Power to Heal: A Celebration of Black History Month, presented by Cascadia Behavioral Healthcare, in partnership with Multnomah County and Kaiser Permanente. We hope to see you there!

The 2020 NW Black Comedy Festival spans four days and will feature Black comics from the NW and beyond, also including popular local showcases that spotlight Portland’s Black stand-up comics. There’ll be lineups from Minority Retort and The Blackonteurs, as well as an all-women show, “Ladies Run This Mutha”. See the list of headliners here and purchase tickets here.

February 21: I Love Being Me

When you look in the mirror, do you like what you see? Liberty Belle does. A rather precocious child, Libby, as she is called, has a joy for life and a level of self-confidence that is contagious. Join Northwest native, author April E. Allen as she read from her new book “I Love Being Me” a Wonderful Lesson in Acceptance and lead activities that will encourage young readers to celebrate humanity

A prolific writer of novels, essays and song lyrics who first came to prominence in the early 1970s, Morrison focused particularly on the experience of women within the black community. Her work earned her numerous awards, most notably the Nobel Prize for Literature, for which she broke new ground as the first African American winner.

Join us for a celebration of the life and achievements of Toni Morrison.

A Black History Month Tribute to Toni Morrison
Literature event in Portland, OR by Multnomah County Library on Saturday, February 22 2020 with 907 people interested and 54 people going.

February 23: Power to the People: The Black Panther Party's Legacy in Albina

The Vanport Mosaic presents a multi-faceted oral history presentation and community conversation led by Mr. Kent Ford, a founding member of the Portland Chapter of the  '60s-era black empowerment organization - the Black Panther Party. Watch the short documentary "Sting Like A Bee," and listen to Kent Ford's personal memory of revolutionary activism and community organizing.  The event culminates in a conversation between Mr. Ford and another local activist, connecting these stories to the broader political scene and stimulating a group reflection that links this provocative history to the challenges we face today.

In honor of Black History Month, join Multnomah County Library’s Black Cultural Library Advocates in a screening of The Wiz. The movie will be followed by a short community conversation on the importance and impact of the film.

When Harlem schoolteacher Dorothy (Diana Ross) tries to save her dog from a storm, she's miraculously whisked away to an urban fantasy land called Oz. After accidentally killing the Wicked Witch of the East upon her arrival, Dorothy is told about the Wiz (Richard Pryor), a wizard who can help her get back to Manhattan. As Dorothy goes in search of the Wiz, she's joined by the Scarecrow (Michael Jackson), the Tin Man (Nipsey Russell) and the Cowardly Lion (Ted Ross).

Born and reared in New Orleans, the cradle of jazz, Devin Phillips began his intense affair with the saxophone at the age of eight. At 14, he was accepted into the prestigious New Orleans Center for Creative Arts, whose alumni include Wynton and Branford Marsalis, Harry Connick, Jr. and Nicholas Payton. Performing, touring and recording with top jazz artists, such as Wynton Marsalis, Eddie Palmieri, The Headhunters, the New Orleans Jazz Orchestra, musician Lenny Kravitz, and Los Hombres Caliente (with whom he recorded two award-winning albums) soon followed.

Portland-born Christopher Brown was formally introduced to music at age five with piano lessons. By age eleven, he not only added both the saxophone and drums to his musical palette, but also came to the conclusion that music was how he wanted to make a living. He has since performed and/or recorded with many of the world’s top musicians, such as Beyoncé, Esperanza Spalding, Liv Warfield, Branford Marsalis, Wynton Marsalis, Delfeayo Marsalis, Roy Hargrove and Ray Charles.

Come out and support local artists and leaders as they share with the community: singing, acting, poetry and speaking. All ages. Free, with donations accepted at the door.

The past, while behind us, should never be forgotten. This sentiment is best represented by the image of a Sankofa; an Asante Adinkra symbol of a bird with its head turned backwards addressing the past; and feet facing forward- looking to its future, carrying an egg in its mouth signifying the "gems" of the past as well as the generation to come. The term originates from the Twi Language of Ghana, translating to “Go back and get it … It is not taboo to fetch what is at risk of being left behind”.

This exhibit aims to bring attention to local and national African American history and narratives, which inspires pride and connection to the past while encouraging critical examination of oneself and history to powerfully act, do, and grow.

Join us on Thursday, February 27th during the Last Thursday Art Walk at The Center for Self Enhancement.

Join us for an evening of food, drinks, fun and affirming the wonderful accomplishments of Black people in history and today!

Come enjoy a multi-lingual concert that encourages a look through cultural elements that unite all people. Robbi K performs in many languages, (Spanish, Hebrew, Hindi, Yoruba, Zulu, Arabic, Latin, & English). Audiences move to world rhythms to further develop an understanding of and respect for diversity in language and dialects across cultures, ethnic groups, geographic regions, and social roles.

More from the Black Resources Collection at the Multnomah County Library

RELATED: What is Juneteenth?