Newly-elected Clackamas County Board Chair Tootie Smith says she'll have a huge Thanksgiving, and she calls Gov. Brown a hypocrite for enforcing the COVID-19 freeze. 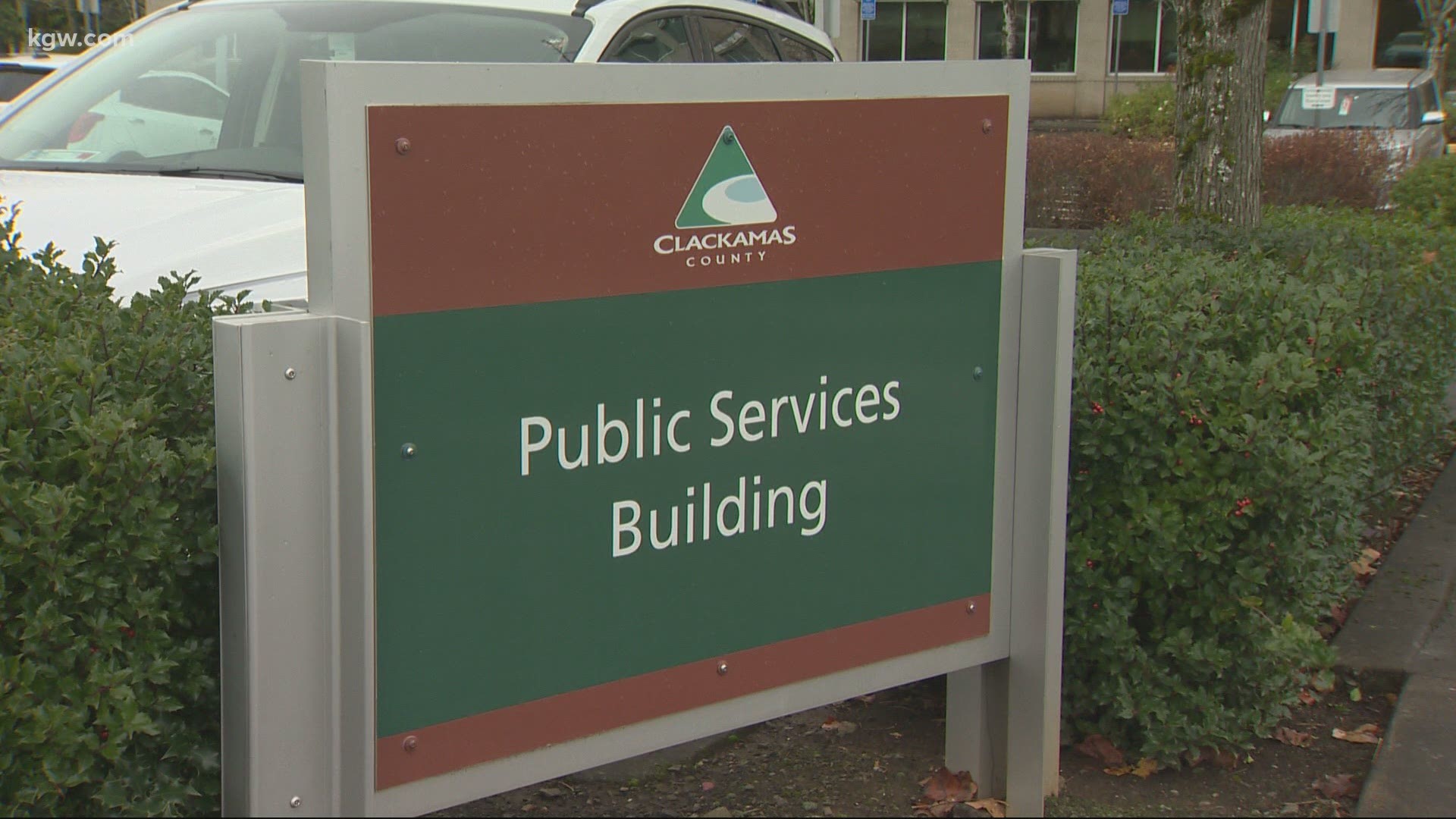 CANBY, Ore. — In Clackamas County, some in the public eye are challenging Oregon Gov. Kate Brown’s new COVID-19 safety restrictions. A county commissioner posted on social media that despite the "freeze," she wants to have a big Thanksgiving gathering.

On her Facebook page, newly elected Clackamas County Chair-elect Tootie Smith wrote: "My family will celebrate Thanksgiving with as many family and friends as I can find. Gov Brown is WRONG to order otherwise.”

The politician's post made the TODAY show on NBC Tuesday morning in a story about new restrictions.

KGW reached out to Smith on Tuesday to talk about the controversy but has not heard back.

The newly elected commissioner did go on FOX News to talk about it, telling Tucker Carlson, “This is a travesty that’s happening in our state. How dare Governor Brown think she’s going to come out, she’s going to send the police into people’s homes and arrest them and fine them for having a Thanksgiving meal with their family, while at same time she lets rioters and anarchists destroy downtown in the city of Portland. That’s hypocrisy.” 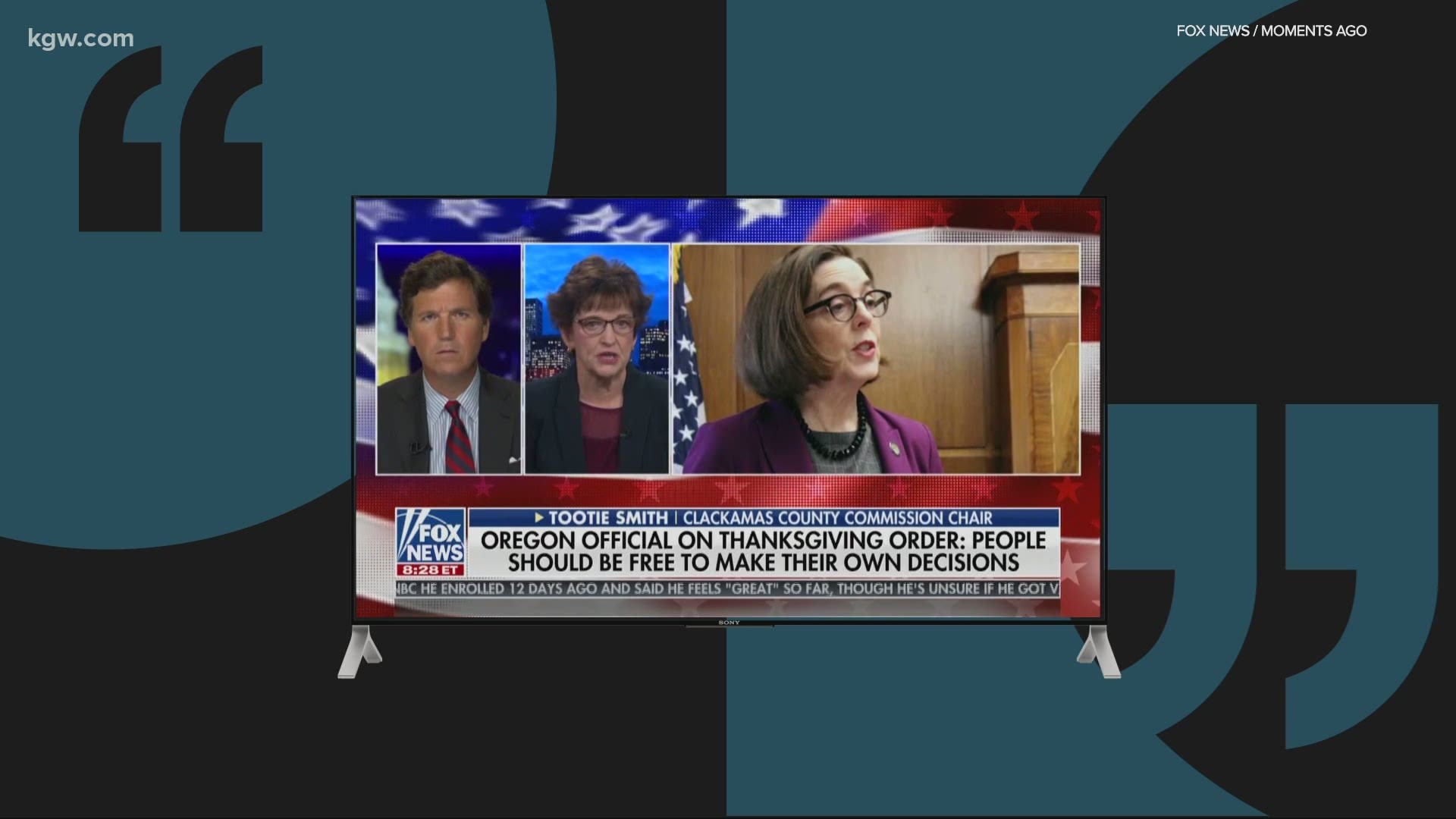 "We don't need to be treated as second-rate slaves in our own homes," she added.

Earlier Tuesday, Gov. Brown had issued another press release on the freeze, writing: "I expect local law enforcement to continue to use an education-first approach, but Oregonians need to understand that these rules are enforceable under law. A large majority of Oregonians continue to do the right thing to protect themselves, their loved ones, and their neighbors. However, when Oregonians don’t take COVID-19 seriously, and don’t take steps to reduce the spread of the disease, they put all of us at risk.”

Smith reached out to constituents in an email describing the governor’s actions as “overreaching” and claiming that because of her post, “Now the mob is coming after me … with death threats, insults and baseless accusations.”  Smith also asked for donations to defend herself.

Another Clackamas County commissioner did respond to Smith's plan to defy and gather.

“I would say that sending a message of having large gatherings is very very dangerous,” said Commissioner Sonya Fischer. "We know the science of this virus is that it spreads in social gatherings. That is where the spread is happening."

Also in Clackamas County, a naturopathic doctor in Canby has a billboard up claiming, "Cloth masks don't stop viruses".

On the Canby Clinic website Dr. Erin Walker laid out her rationale, which she said is based in science. She's not a fan of face coverings.

“I think again it’s very important for people to be aware of the limitations of masking and that masking doesn’t stop viruses,” said Walker.

“I have some concerns about how people might interpret that sign," Vines said, "and actions they may take thinking that face coverings are not helpful, when it’s very clear that they are."

Clackamas County is a diverse place and there is a variety of opinions on many subjects. But the science is the same that as it is anywhere: Masks, social distancing and avoiding large groups will help slow the spread of COVID-19 and save lives.

Commissioner Fischer is happy to stick with those guidelines.