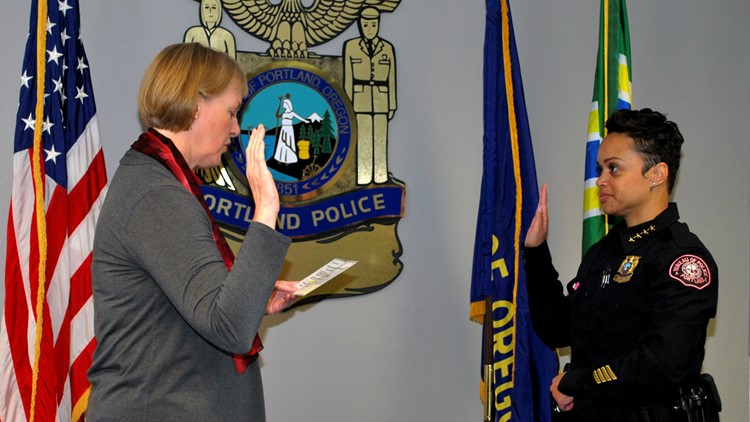 Photo by: Portland police
Danielle Outlaw is sworn in as Portland Police Chief.

Public paychecks: How Portland's police and fire chiefs' paychecks compare to their peers

Serving as the top cop or fire chief in a big city comes with a lot of expectations — waves of mayhem to prevent, thousands of employees to oversee and all of the politics that come with being one of the most recognizable figures on the street.

In return, most police and fire chiefs also can expect to be well compensated, even if they aren’t working in one of the nation’s largest cities. A Business Journals analysis of major-city payrolls nationally found the average police chief received about $203,000 in total compensation last year, while the average fire chief received about $180,000. In many cases, top-ranking police and fire officials were the best-paid in their respective cities, regardless of a municipality's size or frequency of emergencies.

For example, San Francisco Police Chief William Scott received a compensation package worth $289,205 in 2017, enough to make him the second-highest-paid police chief among the dozens of city payrolls analyzed by the Business Journals. Scott oversees a department with 2,332 officers and 603 civilian employees who collectively fielded some 6,300 violent-crime cases in 2017, according to federal data.

Scott and McManus both earned more than New York Police Commissioner James O’Neill, who oversees the nation’s largest police force with some 36,000 officers and 15,700 civilian employees. Last year, New York reported more than 46,000 violent crimes, the most among cities in the nation.

O’Neill's total compensation from New York City was $226,366 in 2017 — about 20 percent less than his peers in San Francisco and San Antonio. New York's top cop was out-compensated by at least 10 other police chiefs nationally, according to the payroll sample analyzed by the Business Journals

The top-paid police officer in the country last year was Los Angeles Chief Charles Beck, whose received $349,565 in total compensation for overseeing a total force of 10,000 officers and more than 2,800 civilian employees. FBI data show that there were roughly 30,000 violent crimes in L.A. last year, ranking it second among major U.S. cities. Beck retired in June and was succeeded by Chief Michael Moore.

TOP OF THE LADDER

It’s not just big city police chiefs who earn less than their counterparts in smaller cities, and many of the best-paid fire chiefs hail from California and other areas prone to the sort of wildfires that have challenged emergency workers for months.