Many community members live lonely lives behind closed doors in the city's single room occupancy hotels and low income housing. They often have no family, friends and little social interaction. But the Maybelle Center offers them a family. 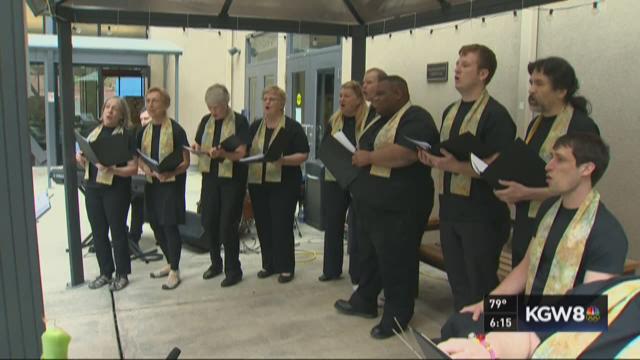 PORTLAND, Ore. -- The Maybelle Center for Community, formerly known as The Macdonald Center, in Old Town Portland is building a community for people who are often forgotten and invisible.

Many community members live lonely lives behind closed doors in the city's single room occupancy hotels and low income housing. They often have no family, friends and little social interaction.

But the Maybelle Center offers them a family. The center on Northwest 6th Avenue helps nearly 500 people a year connect and build better lives.

"We believe the health of a community can be measured in how its members care for each other," said Jon Ulsh, Maybelle's executive director.

One idea has brought the community together through the power of song. A choir of many voices, stronger as one.

The center hired a choir director and a piano accompanist, and welcomed people to join the choir for 15 weeks with the goal of a final performance at the center's summer open house.

"Within five minutes of singing together, we felt the bond, that we were part of a community," said Kristun Grondal, the center's associated director.

Vince Irelan is one of the Maybelle members. He describes himself as transgender pre-op.

"That makes it very difficult in this world. I have to come home to all this loneliness. I'm kind of cast out by my own circumstance," said Vince.

Vince is finding his voice as part of the Maybelle Community Singers. Other members have started calling him a rock star.

"It's the place I call home. Where people call me family," said Vince.

Di Stabaeus, another Maybelle community member, is an out of work teacher from South Dakota. She came to Portland to hike the Pacific Crest Trail. But when she got to town, her backpack and all her belongings were stolen. She ended up sleeping under the Hawthorne Bridge.

She ended up living in a couple of different SROs before the Maybelle Center helped her get an apartment in its affordable housing complex.

Di joined the choir, too, and loves the community it brings.

"You get this feeling like a circle. Everybody is equally as important. I love that feeling, the joy of it," she said.

After weeks of practice, the Maybelle Community Singers were ready for their debut performance.

"For soloists, it's a big thing. For the group, an even bigger thing. We are really excited for this day," said Kristrun Grundal.

The group sang a medley of songs including "Lean on Me" and "Ain't No Mountain High Enough." The audience, impressed and thrilled by the performance, cheered.

"They were great. Fantastic. They put in a lot of hard work and they put their souls into it," said one audience member.

As they belted out their last notes, Vince and Di hugged and blew kisses as they bowed.

"My dad would be proud looking down on me from above," said Vince.

The first session of the Maybelle Community Singers was deemed a huge success and choir members are already looking forward to a new session in the fall. They think even more members will join.

The center believes it is only reaching about 7 percent of the population that is isolated in Portland. With more volunteers, it hopes to expand its reach and help put an end to isolation in Portland.