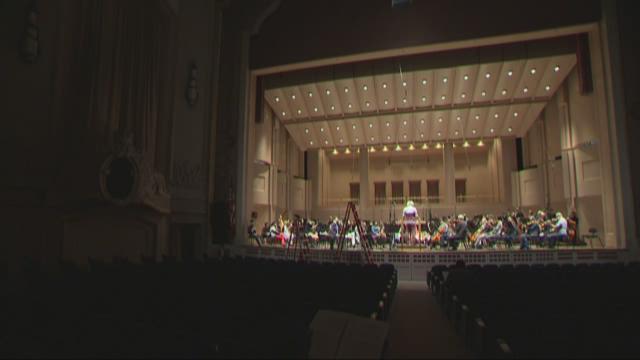 “Great art should reflect the society in which it's created,” said orchestra president Scott Showalter.

He’s also the CEO and said the Oregon Symphony enjoyed record sales, attendance, donations and newcomers in the audience during its current season.

Conductor and music director Carlos Kalmar says the symphony is pushing boundaries -- in a good way.

“I personally am very in the corner, this is awesome. And it’s very simple. Because I think that ultimately institution like orchestras have to look beyond the idea of just being a museum,” he said.

This year, the orchestra brought in visual art--videos projected on the walls and ceilings as the musicians played.

Next year, they will push further, devoting three of their 90 performances to social issues including homelessness, the environment and immigration.

“Well the immigration concert amongst the three projects we are doing next year is probably for me personally the closest to home because I am the son of immigrants. I live in the United States therefore I am an immigrant," he said.

The immigration show will feature an original play performed on stage with music.

As part of the push to address homelessness, members of the symphony plan to team up with singer Storm Large to help pregnant homeless women create original lullabies for their babies.

It’s an effort to make an impact and to break the stereotype of a symphony.

“Historically, we're looked at as a privileged white organization playing dead white men music. And that's not the case today. Certainly not with this orchestra. We want to remain exciting and relevant, a place where people can come and have fun and know that what they're going to see is important,” said Showalter.

If it works the way the leaders here hope, there may be more records in the future for the Oregon symphony.