They learned their video production skills through Outside the Frame, a Portland-based nonprofit that teaches homeless and marginalized teenagers job and life skills through filmmaking. 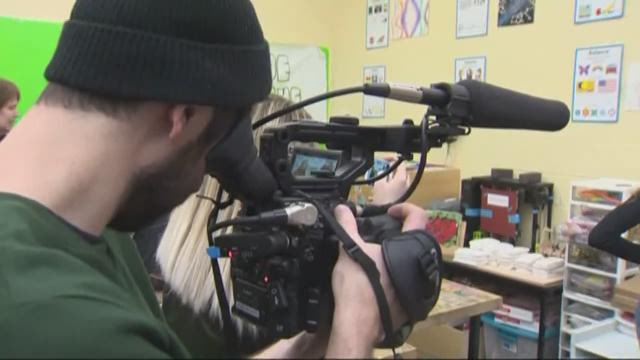 PORTLAND, Ore. -- In a small Benson High School classroom, decorated floor to ceiling with paintings and drawings, one group of about half a dozen teenagers walked another through the ins and outs of properly framing an on-camera interview.

“It's really cool to teach people these things that I'm really passionate about,” said Joey Whiting.

Whiting and his fellow instructors don’t go to Alliance High School at Benson, the alternative program where they put their lesson plan into action Thursday.

They learned their video production skills through Outside the Frame, a Portland-based nonprofit that teaches homeless and marginalized teenagers job and life skills through filmmaking.

Whiting, who used to camp on the streets of Portland, has been a participant for seven years and now works as an instructor.

“Now I’m able to go to the places that helped me out and pay it forward,” he said.

Thursday’s collision between Outside the Frame and Alliance at Benson is, instructors hope, the beginning of a budding partnership promoting project based learning in Portland Public Schools, starting with Alliance.

It was the brain-child of Alliance art teacher Joanna Vausberg, who saw value in focusing on one creative endeavor for an entire semester.

“They’re more likely to be able to stick it out and not lose interest, even though it might be very challenging and lots of steps,” she said. “They’re willing to do it because they’re invested because it’s their project.”

She approached Nili Yosha, executive director of Outside the Frame, a few years ago with the idea. It was approved recently by district leader.

“This could have been just the pipe-dream of a wacky art teacher, but luckily she found us and we immediately saw the potential,” said Yosha.

19-year-old Ethan Shoemaker is a few semesters from graduating from Alliance, which admits students up to the age of 21.

He’s already working on his film, a short documentary about graffiti in Portland.

“It’s like insane because I’m doing all these different things like scouting locations. I’m going to a class outside of school and learning all these camera techniques and all these crazy, awesome things,” he said.

If the program continues as planned, participants from Outside the Frame will visit a few times a semester to help students at Alliance hone shooting, interviewing and editing techniques.

Shoemaker and his classmates will also research and write papers on the topics they cover.

It’s a curriculum far better suited for a kid like Shoemaker, who describes his ideal job as “…anything that doesn’t involve sitting behind a desk.”

Suffice it to say, traditional learning environments didn’t appeal to him.

“I was a little bit out of place, and regular school wasn’t cutting it for me I guess,” he said. “With Outside the Frame, this just whole world opened up for me with things that I want to do. So basically, I found my niche.”

For kids in Outside the Frame, the partnership brings an unexpected payoff.

They joined the program hoping to get a leg up, themselves.

Now they’re in a position to give one to others.

“We’ve been in, like, similar situations as them,” he said. “I feel like seeing someone who came from that situation, like, teaching you these things… It’s helpful for them because it gives them hope.”