The Klondike Fire is now the largest of the wildfires burning in Southern Oregon and is demanding the most firefighting attention. 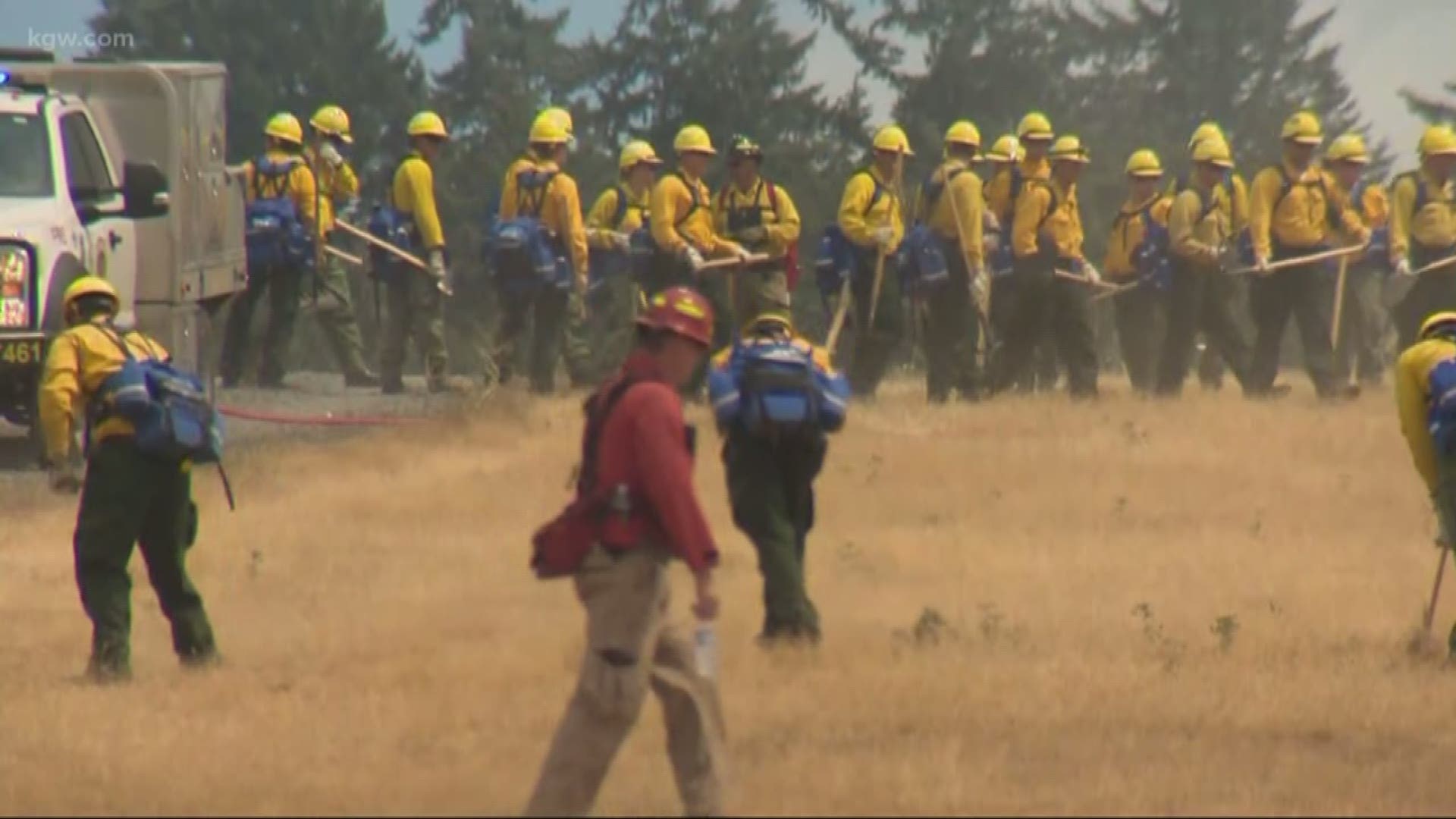 The Klondike Fire burning southwest of Grants Pass continues to grow, torching more than 59,000 acres and shrouding the region in thick smoke.

The Klondike is now the largest of the wildfires burning in Southern Oregon and is demanding the most firefighting attention. As of Wednesday morning, the fire was 15 percent contained.

There remain 1,600 fire teams working the Klondike and Taylor Creek Fires. More crews are expected to join the firefight on Wednesday.

The wildfire jumped the Illinois River and triggered a new round of evacuations over the weekend.

The fire continued to grow and reached 59,105 acres by Wednesday.

Large smoke columns and flames could be seen from U.S. Highway 199 in Selma and Cave Junction.

In a Facebook post, Illinois Valley Fire Chief Dennis Hoke said the plume of spoke turned the highway into a "parking lot" full of spectators.

"Extremely dry fuels and hot, dry weather have fueled the continued growth of both fires," officials said. "Steep, rugged, inaccessible terrain combined with limited resources due to intense wildfire activity across the western United States has made suppression efforts a challenge."

Firefighters are focusing their efforts on the southeast corn of the fire, where it crossed the Illinois River.

Crews are working to strengthen the containment line between the fire and the communities of Selma, Wonder and Wilderville.

"Our ultimate goal is protecting the property and people out here," fire spokesman Sam Harrel said in an update Tuesday. "That's what comes first."

Officials aren't expecting a Thursday's storms to bring enough rain to douse the wildfire, rather, they could make it worse.

Showers will be spotty and isolated. Thunderstorms are expected to bring erratic winds that could scatter embers and put firefighters in danger.

"It's a real 'watch out' situation for our firefighters on the ground," Harrel said.

See this post for the most detailed information on evacuations.

Here's a map showing the most recent movement of the fires and evacuation areas.

Here's a roundup on all the other fires burning in the area.

All the major fire lines appeared to hold on the Taylor Creek Fire, which is now more than 49,000 acres and 45 percent contained.

The fire that brought the most closures and evacuations last week hasn’t gone away by a long shot, but it hasn’t seen the same amount of growth as the Klondike.

Bear Camp and Peavine Roads remain closed to traffic due to firefighter activity. Officials said the ongoing risk of trees and other debris falling on roads continues to threaten traveler safety.

Hoke said the concern is the winds will shift to northwest blowing southeast toward a more populated areas. The winds are expected to be light, around 5 to 10 mph.

"We will monitor this situation very closely," he said.

Fire officials said good news came in the form of lowered evacuation levels on the north edge of the Taylor Creek on Monday.

The Josephine County Sheriff's Office lowered evacuation levels in the Galice area, allowing a handful of residents who had evacuated to return to their homes. The evacuation level was downgraded from a Level 3 "Go" to a Level 2 "Get Set" for residences on Galice Creek. Power was also restored to some areas.

This collection of fires, formally known as the Sugar Pine and South Umpqua complexes, is located north of Medford near Prospect.

The complex reached 45,606 acres and were 12 percent contained as of Wednesday.

The Miles Fire, the largest in the complex, has spread to 31,951 acres and is 15 percent contained.

Crews are continuing to make progress, including on the southern flank of the fire, where it has jumped Elk Creek Road twice in the last week, fire officials said.

"We're waiting for the fire to dictate what our next move is," he said in a Tuesday update.

Fire officials said that with 65 days since the last meaningful rainfall, the area is in the midst of "moderate drought" conditions, and the parched vegetation is at high-risk of igniting.

A fire weather watch was issued Wednesday due to the potential of dry lightning and thunderstorms.

"The greatest chance for a thunderstorm is east of the fire," fire officials said. "If a thunderstorm does occur, gusty outflow winds as high as 40 mph are anticipated to make rapidly changing conditions for firefighters."

Teams are on alert for responding to new fires if dry lightning does occur.

Though the fire led to some area closures, officials stressed that the region is not completely shuttered to tourists.

"Southwest Oregon remains open for business and ready to welcome visitors," officials said. "Please check with local chambers of commerce and businesses as there are many opportunities for recreationalists, including access to Lost Creek Lake through Joseph Stewart State Park."

For updated evacuation levels due to this fire, see this map.

The Natchez Fire south of Cave Junction grew to 15,940 acres as of Wednesday, with containment remaining at 55 percent.

Over the next two days, the breezy conditions are expected to trigger group torching and short uphill runs in patches of conifer trees.

Crews struggled to extinguish spot fires and hold containment lines Tuesday. Officials attributed the difficulties to "lack of resources" and the abundance of dry timber, chaparral, grass and understory — the perfect fuels from the growing fire.

Fire managers said their main goal is to keep the fire away from Highway 48 and out of people's backyards. Crews will be conducting burns to provide "as big of buffer as possible" between the blaze and residences.

A Level 1 "Ready" evacuation has been issued for the community of Sunstar. Closures remain in effect on the Rogue River-Siskiyou and Klamath National Forests.

For public health and safety due to wildfire, the Siskiyou County Sheriff's Office issued an evacuation order for the area south of the Natchez Fire, near the terminus of the South Fork Road and the South Fork of Indian Creek.

The warning area was also expanded to include all residences on or accessed from the Indian Creek/Grayback Road from the intersection with Dolittle Creek and north to West Branch Campground.

Residents in the warning area are reminded to be vigilant in the possible event that the evacuation warning is upgraded to an evacuation order.

The Hendrix Fire burning southwest of Ashland has held steady at 1,082 acres and grew to 90-percent containment as of Wednesday.

Fire crews will continue to patrol, monitor and mop up the edge of the lightning-caused fire.

Officials said the perimeter of the fire will likely remain the same until the area gets some rain.

Crews are expecting to fully contain the fire by September.

Meanwhile, firefighters are pulling surplus equipment off the fireline and redirecting their resources to other fires in the area.

A chipper is also being used to grind vegetation piled along roads used during fire suppression activities.

The Rogue River-Siskiyou National Forest area closure for the southern portion of the Siskiyou Mountains Ranger District remains in effect. Detailed information and a map of the area closure are available here.