Here's a look from KGW reporters at what the winter weather looks like Friday throughout the Portland metro area, Columbia River Gorge and Southwest Washington. 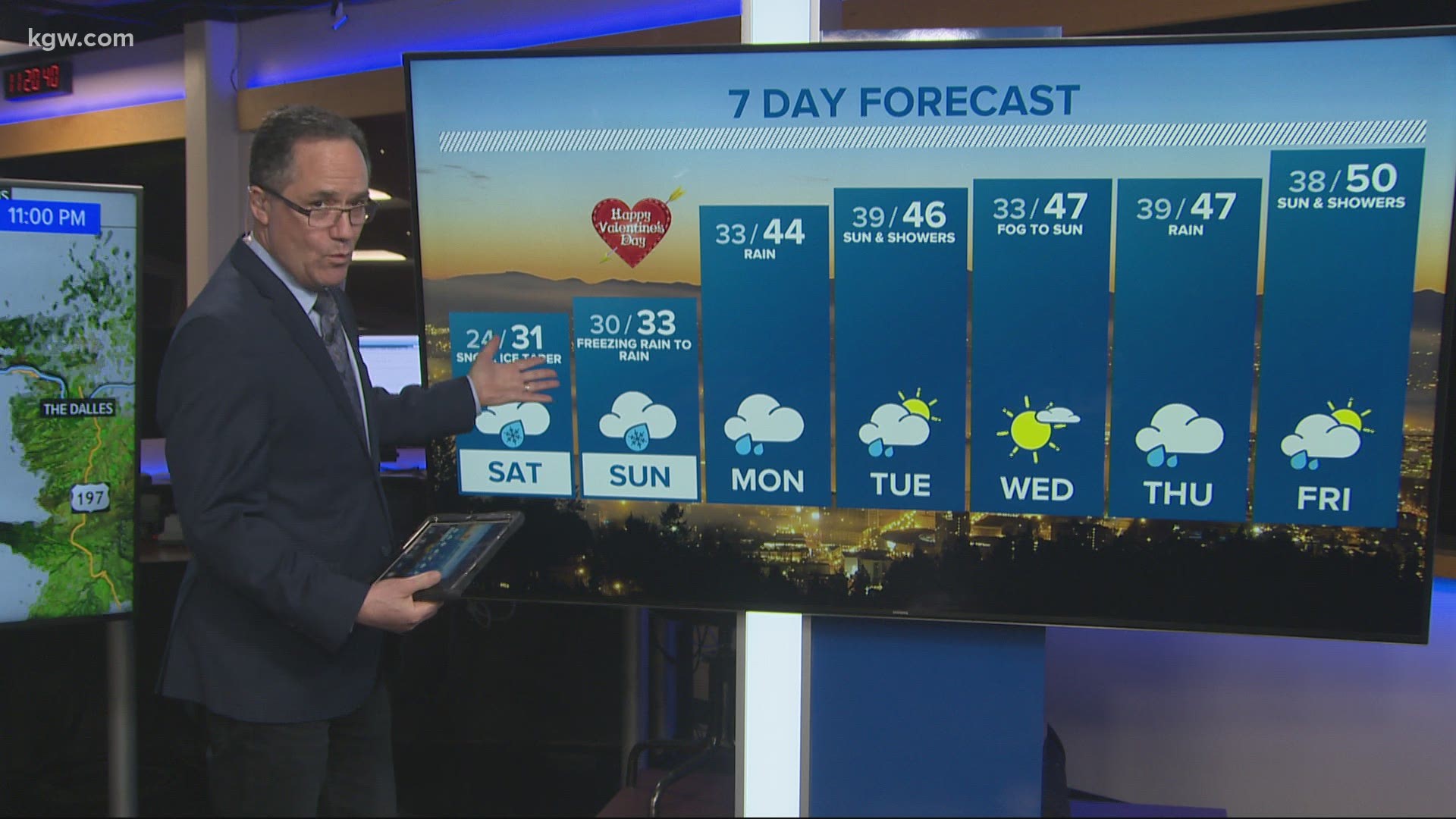 PORTLAND, Ore. — A few inches of snow hit the Portland metro area and icy roadways caused issues for drivers in the West Hills and along the Columbia River Gorge. Here's a look at what KGW reporters are seeing as they're out covering the winter storm.

Katherine Cook was in Salem Friday night where freezing rain continues to fall, leading to ice accumulation on pretty much everything, from roads to homes and plants. The severe weather has led to tens of thousands of people without power in the area.

I’m seeing this all over Salem tonight! Thousands of people are out of power. pic.twitter.com/lQai2dSh6i

What exactly is freezing rain? pic.twitter.com/WFHn6rvKqK

I-84 closes in the Gorge

Morgan Romero spent Friday night on I-84 where the conditions were treacherous. She and photographer, Richard Gordon, got stuck in the snow in Troutdale. The Oregon Department of Transportation (ODOT) said the freeway will close in both directions between Troutdale and Hood River by 9 p.m. Friday. There is no estimated time for it to reopen.

Wherever the weather is horrible

Katherine Cook spent her day Thursday covering the winter storm as it moved in to the gorge. And then on Friday, she and photographer Jon Gudgel packed up and headed to where the weather was expected to be worse: Marion County, which is expecting an ice storm overnight Friday.

Chaining up in the West Hills

Maggie Vespa on Friday morning covered the West Hills, which had emerged as one of the first trouble spots for drivers Thursday. The Multnomah County Sheriff’s Office tweeted a portion of Northwest Germantown Road would be closed due to “dangerous conditions and multiple stalled vehicles.”

The Portland Bureau of Transportation dispatched plows overnight to clear the roads and set up a staging area along West Burnside Street near Northwest 23rd Avenue, where drivers could put chains on their tires.

Early Friday morning, Dee Stulginski opted to remove the chains from her Honda in the nearby Zupan’s parking lot.

“Everyone's afraid of going out in the snow and everything, and honestly I'm kind of the same way, too,” she said.

Stulginski is from California, and this is her first winter storm in Portland. The chains worked well on the drive down West Burnside she said, noting she was having trouble removing them. After about twenty minutes, she got the chains off, and continued her trip.

All of our @KGWNews photographers are champs.@KurtAustin6 lying on his back in the snow, to help a nervous, stranded motorist remove her chains... above & beyond 👏👏👏 #kgwweather pic.twitter.com/MjMVs4lCjd

“It was really good,” she said, of the road conditions after the first round of snow. ”It was actually amazing. I didn’t know how well Portland plowed their streets and everything.”

Highway 26 WB is a mess. Shot this just now near the @OregonZoo exit. Multiple cars stalled along the side of the road. #kgwweather #PortlandSnow pic.twitter.com/n9DxCFneQe

Blowing snow in the Gorge

Reporter Devon Haskins and photographer Chad DeHart made their way bright and early out east along Interstate 84 to Corbett, where in addition to the snow they ran into 55-60 mph wind gusts.

You know that “let’s take a live look outside at the snow”, there’s usually a freezing cold photographer that’s standing behind the camera

And then it looks like things went downhill from there after his live shots were done for the day.

Coming down the hill from Corbett into Troutdale.

I fell on the ice and scraped my hand...at least I got one thing to stop bleeding.

Thanks for following along! pic.twitter.com/QbEqSTdvzJ

Kyle Iboshi stayed in town to find some great drone footage of the snow, but the continuous wind and freezing made it impossible.

We were hoping to fly the drone today but conditions have not been kind. #FreezingRain pic.twitter.com/CZDB3gVdNd

In the meantime, he was able to explore the snow day in Portland, where he said people were mainly staying off the roads and walking to their nearest hardware stores for shovels and sleds.

He spent some time interviewing some people and some dogs?

Nice thing about snow coverage- just about everyone is willing to do an interview about the weather. pic.twitter.com/cgNwxdRCxK