Homes and buildings were destroyed in Sunday night's severe weather. 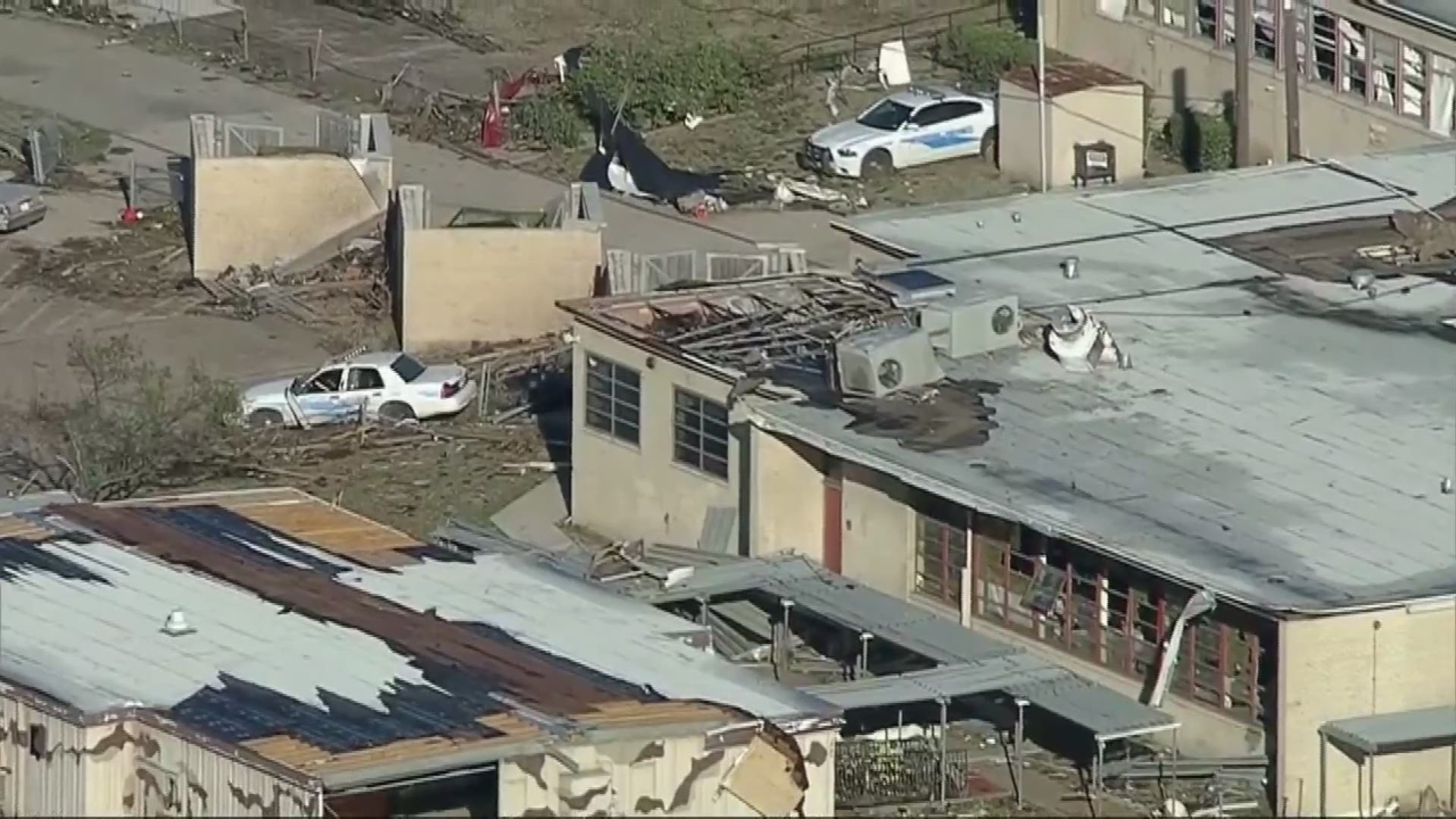 This is a breaking news story and will be regularly updated.

A tornado brought severe damage to a swath from Dallas north of Love Field to outside Sachse late Sunday, leaving behind a path of destruction.

While damage was extensive, the Dallas officials said as of Monday morning, there were no confirmed deaths. Three people were hospitalized but were expected to recover.

At least one tornado was confirmed Sunday night, but a full assessment began Monday morning to determine the extent of the storms and the damage.

The National Weather Service said they were sending survey teams to Dallas, Garland, Richardson, Rowlett and Sachse to assess the damage Monday morning.

Three tornadoes were confirmed, including an EF-3 in Dallas.

Judge Clay Jenkins on Monday signed a disaster declaration for Dallas County. He tweeted that this was to speed up aid and facilitate resource deployment to the affected areas.

As of early Monday, Dallas city officials said there were no reported fatalities or serious injuries.

RELATED: Here's what we know about last night's storms in DFW

RELATED: DFW weather: A number of schools closures have been announced for Monday

There was significant damage at a number of businesses and home in Dallas, specifically in the area from Royal Lane to Northwest Highway, north to south, and from Interstate 75 to Harry Hines Boulevard, east to west.

The City of Dallas said 23 people stayed in its shelter at Bachman Recreation overnight and 12 people remained there Monday.

Travel around that section of the city is limited as well.

Late Sunday, there were approximately 35 traffic signals with no communication, according to the City of Dallas.

In addition, there are a number of road closures. 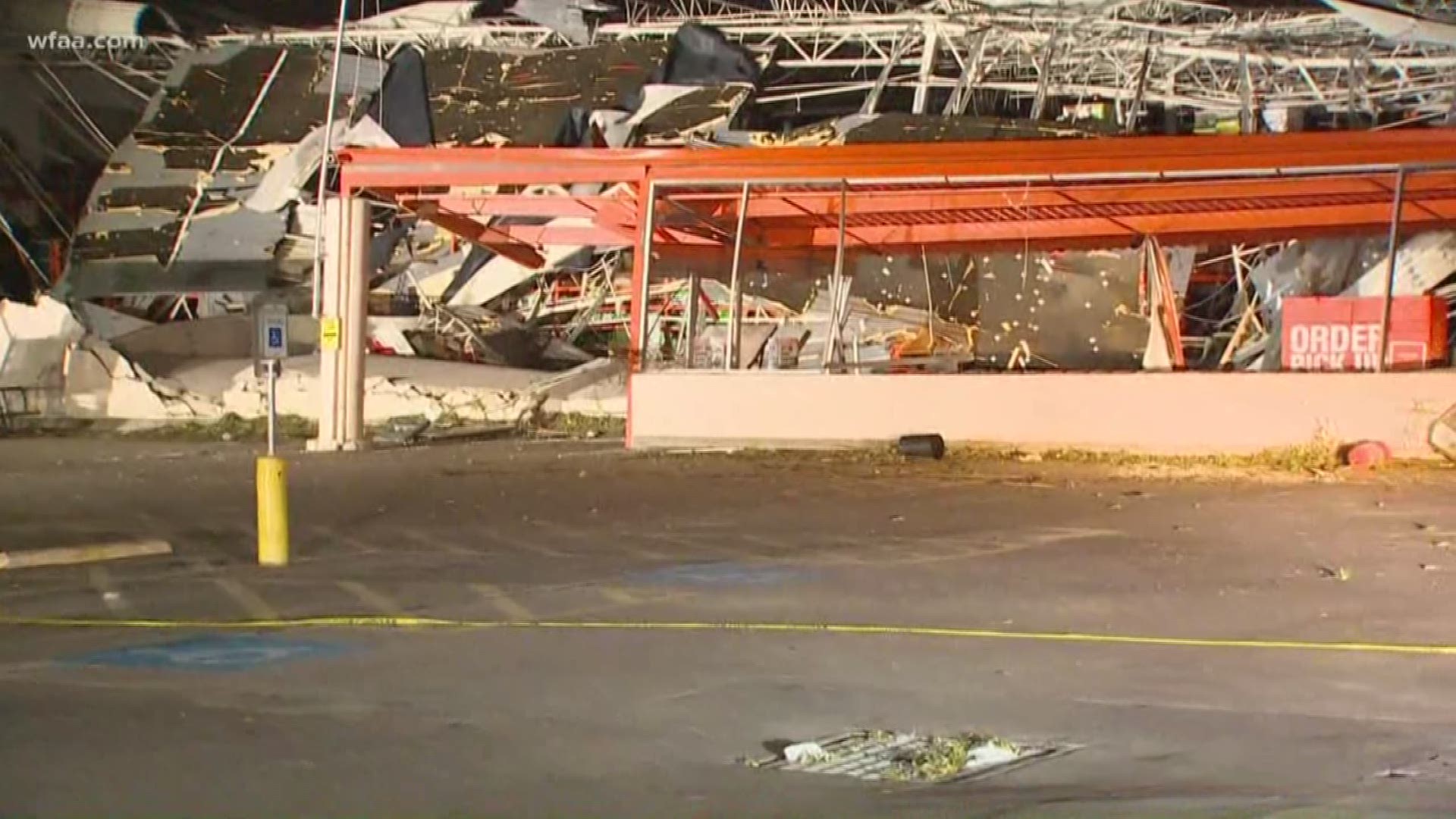 Seven people made it out safely, according to DFR, but a crew was still searching the structure.

Residents who see a downed power line should call 311. The city also recommended that residents in areas with damage stay inside.

There were also reports of gas leaks north of Walnut Hill. If you smell natural gas or suspect a natural gas leak, leave immediately and call 911 and the Atmos Energy 24/7 emergency line at 866-322-8667.

WFAA reporter Alex Rozier posted about damage in a number of locations along Walnut Hill, including at Harry Hines Boulevard and just east of Denton Drive. 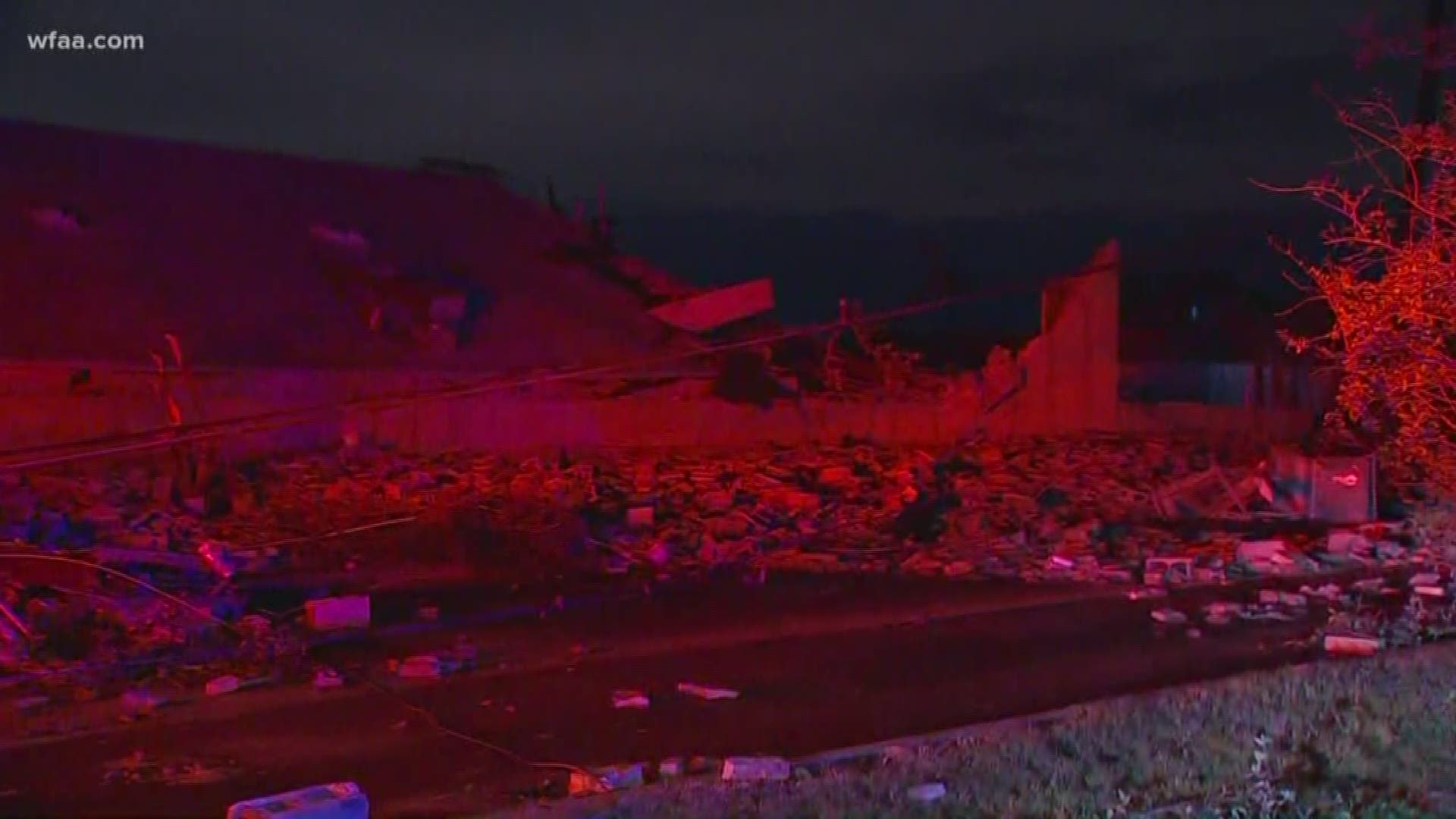 DFR also said they had received multiple calls for people injured in their homes by broken glass.

Here are just a few of the businesses and buildings reporting damage:

Fire Station 41 had its roof and other parts torn off by high winds, and was left uninhabitable, according to DFR. No one was injured.

Reckless Rock Radio KNON 89.3 FM had no programming Sunday night due to storm damage in its recording studio, according to a Facebook post. All staff are safe and uninjured.

RELATED: Do you have storm damage? Here's what to do, how to avoid scams 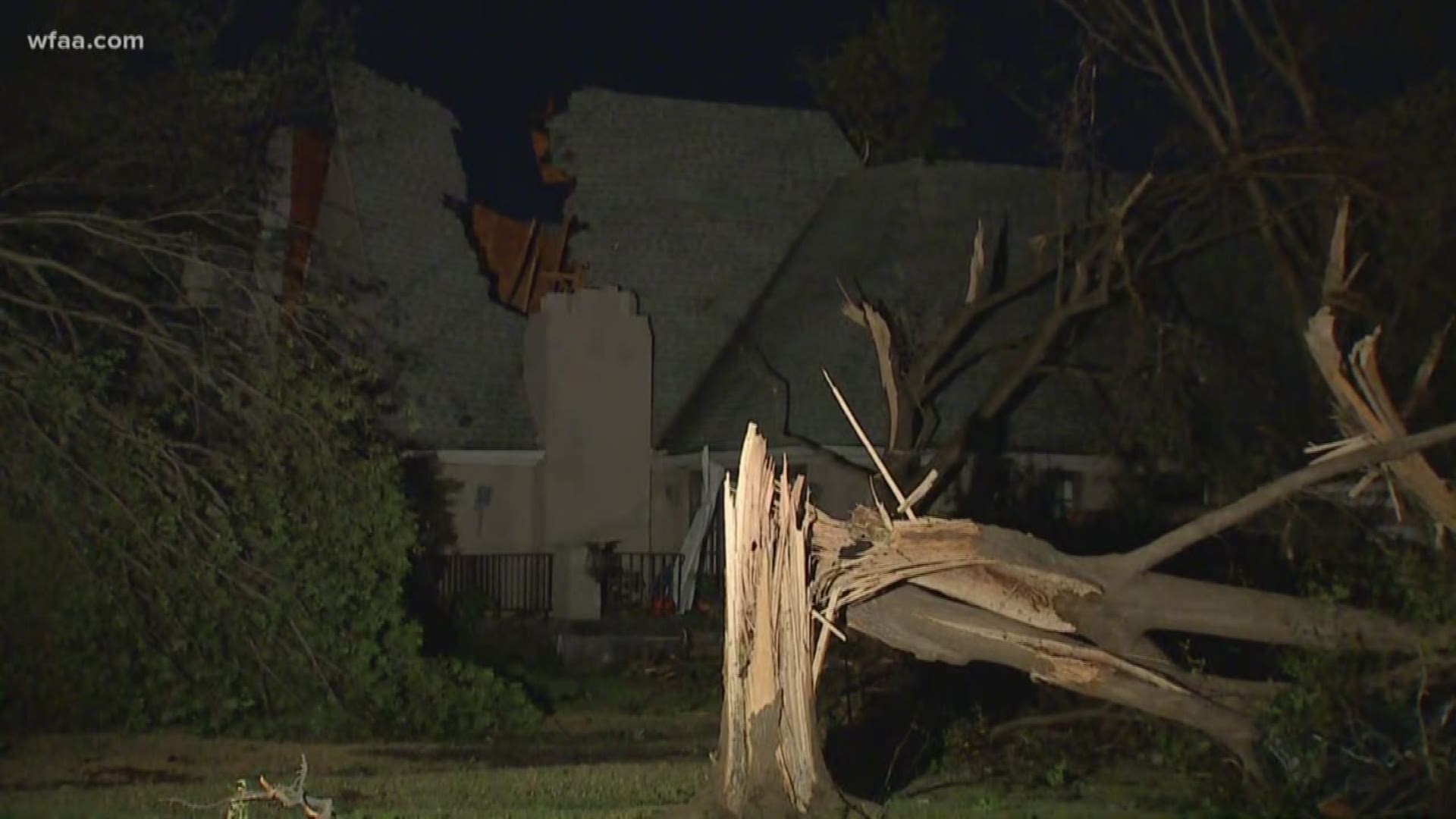 An early voting location had to close Monday due to damage sustained in the storm.

The voting location at Brookhaven College in the "W" building is closed until further notice.

Find the polling location nearest you

In Richardson, emergency workers are responding to reports of damage in the south-central part of the city. According to a Facebook post from the City of Richardson, there are multiple downed trees and damaged buildings with debris in the area, in addition to massive power outages.

In additional a number of main roadways will be closed until repair work is completed. City officials warned this could slow the morning commute.

The closures are in the following areas:

The City of Richardson canceled a few public meetings scheduled to take place Monday because of the storm:

In Garland, damage was reported along a stretch of Miller Road.

There was major structural damage in the residential area northeast of Shiloh and Miller roads, according to police. 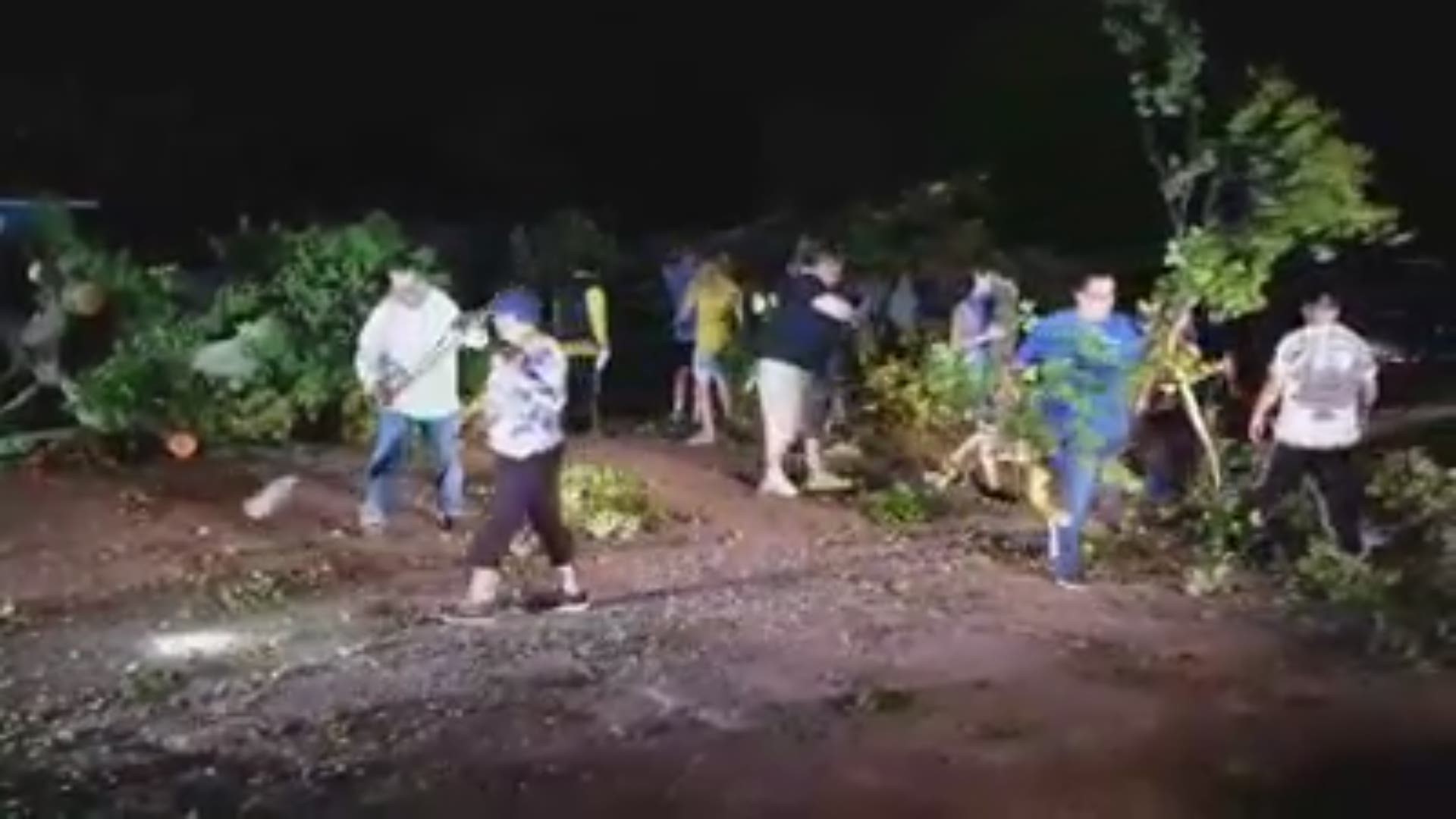 Six houses were significantly damaged in the 6800 block of Eastview Drive in Sachse, according to the city.

Four of the houses were no longer inhabitable, but no injuries had been reported.

The city said first responders were on scene, but further damage assessment would take place in the morning.

More than 90,000 customers were still without power as of 10:20 a.m., according to the Oncor website. The utility company was reporting more than 2,500 outages affecting customers.

Download our free WFAA app to stay up-to-date on all news stories in the Dallas-Fort Worth area, including weather.

Photos/videos from around the metroplex

We've heard reports of downed power lines in Midlothian, in addition to the various power outages in the above counties and hail reports from multiple areas. Please stay safe and seek shelter.

Here's a brief look at what we've seen around North Texas: