While the data is not conclusive, showing a 50 percent chance of either a quiet year or a big season, my hunch is that we slightly favor a quiet snow year with, a trace to 2 inches of total snow. 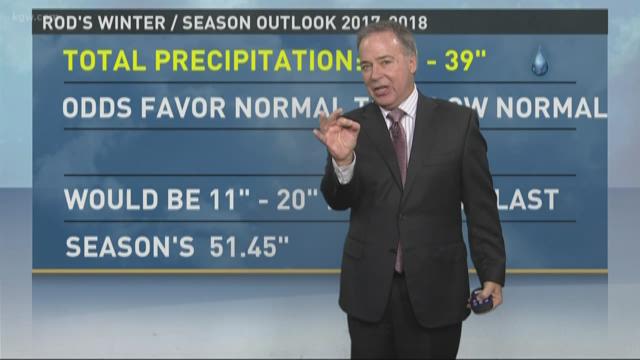 Questions about the coming winter? Join Rod and Ashley for a Facebook Live event Thursday at 8:30 a.m. here!

Keep in mind: my forecast accuracy for seasonal prediction dating back to 2001 is 66 percent. The industry standard for seasonal forecasting is closer to 55 percent.

Last winter, I correctly predicted at least 5-6 inches of valley snow and called for a heightened chance of at least one big storm.

With that said, here's my 2017-2018 winter outlook (see below for how I arrived at these conclusions):

2. Valley Temperatures: Between 1 and 3 degrees below normal, with the coldest months being December and February.

3. Valley Snow: While the data is not conclusive, showing a 50 percent chance of either a quiet year or a big season, my hunch is that we slightly favor a quiet snow year with, a trace to 2 inches of total snow.

4. Mt. Hood Snowpack: It look like a great season on the slopes, with 105 percent of the average snowpack or higher! Timberline could see 600-700 inches of total snowfall, Meadows at least 600 inches, and Skibowl is a wild card.

5. Wind Storms: I see no reason to expect more than a few 50 mph gust events

Here is my Winter / Seasonal Outlook for 2017-1018 Be sure and click through all the graphics, including my Mt. Hood...

Like many forecasters that attempt long-range, seasonal forecast, I rely heavily on the projected Enso Cycle, which is a reference to projected water temperatures in the equatorial region of the Pacific Ocean.

To forecast a period of NEUTRAL conditions, LA NIÑA or EL NIÑO plays a significant role in weather prediction. NOAA's projection on Oct. 17 favors a 55-65 percent of a developing La Niña this fall and winter seasons. The outlook does leave the door open for present NEUTRAL conditions to continue.

Other weather patterns I have examined for my prediction include winters that have followed hot summers in terms of 90 degree heat, winters following 50-inch water years and winters following big snow seasons. Last season's long list of big weather events has made my research for 2017-2018 my most difficult call, since I began seasonal outlook prediction back in 2001.

And although I called for an above normal water year in my last winter outlook, I did not expect to see the 15 extra inches that came raining down.