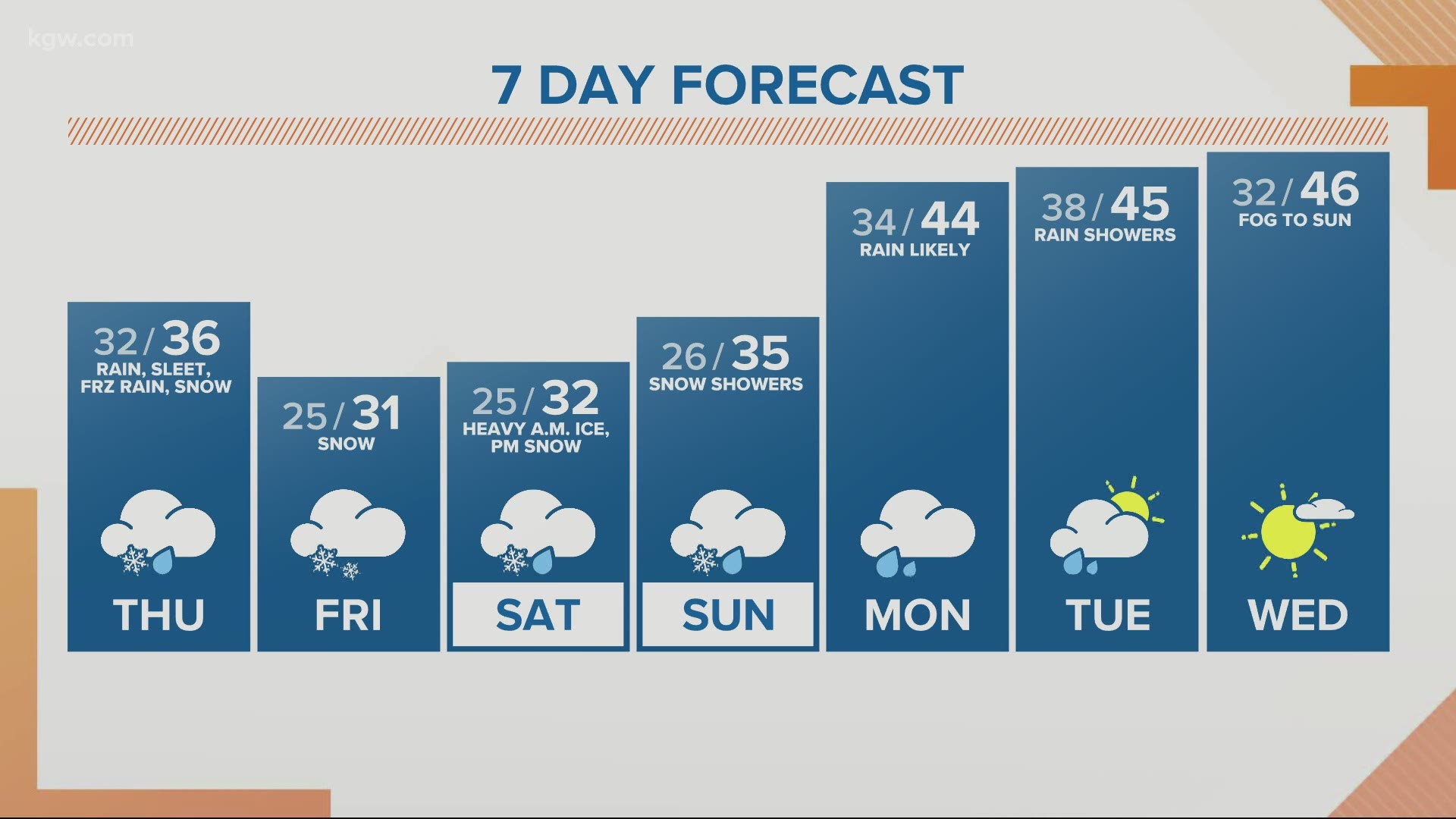 This story will no longer be updated. Check here for the latest on the winter storm in the Portland metro area.

The combination of two winter storm fronts will deliver accumulating freezing rain, sleet and snow in downtown Portland on Thursday night, Friday and Saturday, according to KGW meteorologist Rod Hill. A third front Sunday night will bring possible warming to our region, but it's too early to tell when the threat of winter weather will end.

Hill said Thursday morning Portland will see temperatures slowly drop throughout the day Thursday. Freezing weather and icy roads are likely by early evening if not earlier. Hill noted that gusty east winds were already blowing near the gorge and Troutdale and Gresham reported an icy mix of precipitation Thursday morning.

"Some areas could see up to four inches of snow on the ground by Friday morning," Hill said, " but precipitation totals will be scattered and an icy mix will limit snow potential overall."

On Friday morning, snow showers will turn into a steady snow during the day as the second storm front approaches.

"Much of Portland is at risk to see hours of freezing rain and or sleet Friday night into Saturday morning," Hill said. "Ice accumulations of a half-inch or more, followed by snow showers during the day would make for very difficult travel."

All total, Hill said significant ice accumulations and pockets of eight inches of snow on the ground is likely in our local Portland area this weekend.

RELATED: Here's how to get ready for the cold weather before the freeze arrives in Portland

A Winter Storm Warning goes into effect at noon Thursday through noon Friday in the Portland metro area, though Hill said he believes the warning will likely be extended through the day Saturday. KGW chief meteorologist Matt Zaffino said Wednesday night that he believes Portland could get between 2-6 inches of snow Thursday night through Friday morning. He said to expect more snow north and east of downtown Portland and less snow west and south of downtown.

In parts of the metro area, there could be freezing rain or sleet. Zaffino said areas such as Hillsboro, McMinnville and Wilsonville, again areas west and south of downtown, could see freezing rain. NWS said ice accumulation could be between one-tenth and two-tenths of an inch in those areas.

Portland is under a Winter Storm Warning beginning at noon Thursday. Look for rain to turn to snow in the afternoon in Portland, and to freezing rain or sleet south and west of Portland. More snow arrives with a 2nd system Friday night. #kgwweather #WinterBlast pic.twitter.com/8G5j7SFbbj

Powerful winds and the likely possibility of significant snowfall prompted NWS to issue a Blizzard Warning in the western part of the Columbia River Gorge. It goes into effect from 10 a.m. Thursday through noon Friday. Areas under the Blizzard Warning include Cascade Locks, Multnomah Falls and Corbett.

Zaffino believes there could be 5-8 inches of snow in the gorge. Winds could reach 50-70 mph in the areas under the Blizzard Warning. The combination of snow and wind could reduce visibility down to one-quarter of a mile.

"Driving through the gorge is going to be a real problem, so avoid that if you can," Zaffino said.

Areas east of the Blizzard Warning, such as Hood River, are under a Winter Storm Warning. Winds aren't expected to be strong but remain below 50 mph, according to NWS. Similar snow amounts, 5-8 inches, are expected.

Watch Warning Map from NWS shows Portland under a Winter Storm Warning, a Blizzard Warning for the west gorge and a Winter Weather Advisory for Salem. pic.twitter.com/0RNSv5kzG4

The whole region, from near the coast up to Kelso and east to Cougar, is under a Winter Storm Warning that is in effect from noon Thursday to noon Friday. Snow accumulations between 2-5 inches are expected with the potential for some ice accumulation, according to NWS.

Snowfall forecasts from tomorrow into Friday evening, We're going to see a lot of variation in snowfall amounts around the area. And in precipitation types. Ice is more likely south and west of Portland. More snow overnight Friday into Saturday. #kgwweather pic.twitter.com/8yeytTpwdI

A Winter Weather Advisory goes into effect in the mid-Willamette Valley from 4 p.m. Thursday to noon Friday. That includes the areas of Salem, Woodburn, Stayton and Dallas.

Zaffino said freezing rain could result in some ice accumulation of about one-tenth to two-tenths of an inch. There is less of a chance of snow in this area because the air, further away from the east winds coming out of the gorge, is expected to be warmer.

As you head south of Salem, there are no weather advisories because precipitation is expected to be rain.

A Winter Weather Advisory was issued along the Southwest Washington Coast and Northern Oregon Coast, down to Lincoln City. The advisory goes into effect from 2 p.m. Thursday through noon Friday. Zaffino said there could be freezing rain that leads to ice accumulation.

There's still a chance for more snow through the weekend, particularly Friday night through Saturday, Zaffino said. That will depend on how cold temperatures in the region remain.

Hill said Friday will start with light snow showers in the Portland metro area before picking up with more steady snowfall in the afternoon. Hill said he expects the roads to be icy with snowpack on top.

"Picking a snow accumulation through Friday afternoon is tough," Hill said, "but up to 6 inches could pile up in some areas."

A bigger concern for Friday night and Saturday morning, Hill said, is the potential for consecutive hours of freezing rain and sleet with as much as a quarter-inch to a half-inch of ice accumulating on the roads.

"Storm totals across parts of the Portland area will climb as high as 12 inches of snow with ice as well (through Saturday morning)," Hill said. "Our region may see warming Sunday afternoon, but this is unclear, meaning winter weather conditions could last into Monday."

The weather Thursday night through Sunday will be as cold as it’s been this winter. Temperatures could fall into the low 20s at night and may not get above freezing Friday and Saturday. The coldest weather Portland has had so far this winter is 27 degrees, on Jan. 23 and Dec. 29. In fact, Portland has reached 40 degrees every day this winter, Zaffino said.

Here are a couple of cold-weather milestones that could happen this week:

Zaffino expects the temperature to begin warming up at some point on Sunday. Once the warmup happens, any precipitation will be rain.