And it's not because it rains more here. In fact, living in a rainy state doesn't necessarily make driving more dangerous, according to the report. The rainiest state, Hawaii, only ranked 39th. 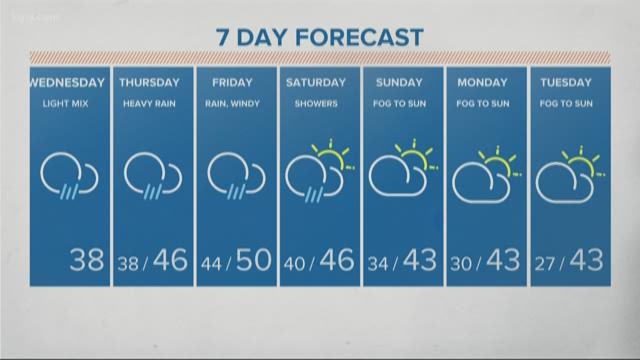 With 55 crashes directly caused by rain, Oregon ranked fifth among the most dangerous states for driving in the rain in 2016.

Last year, Oregonians had a 1.37 per 100,000 chance of being in a crash specifically tied to rainy conditions, according to a recently released Best and Worst States for Driving in Bad Weather report by security provider SafeWise.

But it's not because it rains more here.

In fact, living in a rainy state doesn't necessarily make driving more dangerous, according to the report. The rainiest state, Hawaii, only ranked 39th on the most dangerous list.

"People assume more rainfall equals more accidents," said Rebecca Edwards, the report's author. "This is false. Any rain on the road can create pooling — whether it's 2 inches or 12 inches of rain."

The report, which measured crashes directly caused by rain per capita, listed Arkansas, followed by Mississippi, Kentucky and Alaska as the most dangerous states for rain driving. Oregon rounded out the top five.

Nevada, South Dakota, Colorado and Arizona were considered to be the safest states for driving in the rain.

Oregon did not rank among states with the most rainfall, topped by Hawaii with more than 63 inches a year.

But then, precipitation varies wildly across Oregon. Some areas in the Coast Range receive almost 200 inches of rain a year, while spots in Eastern Oregon report as little as 5 inches.

Regardless of where they happen, weather-related crashes have a significant death toll. In 2016, more than 2,800 people died due to icy, wet and snowy roads, report authors said.

Wyoming, Vermont, Montana and Idaho topped SafeWise's list of the most dangerous states for snow driving.

Far more fatalities occur in rainy conditions than in snowy weather, according to the report. About 2,370 people died in rainy-day crashes in 2016. The same year, 482 snow-related traffic fatalities were reported.

Awareness is key in trying to prevent these types of deaths, said Sage Singleton, a community safety expert with SafeWise.

"People may not realize just how dangerous driving in the rain can be," Singleton said. "If people are driving recklessly in bad weather, police need to be ticketing them, and drivers need to realize there is no need to speed in the rain. Your destination will wait."

She said drivers should stay vigilant and allow themselves more travel time. Travelers are advised to slow down, especially when driving through high water. If someone hydroplanes, they should ease off the gas, gently apply the brakes and steer straight ahead.

Vehicle maintenance is also key for staying safe, Snow said. Before driving, people should check their wipers for signs of damage, ensure their defroster is functioning properly and make sure tires are inflated and in good condition.