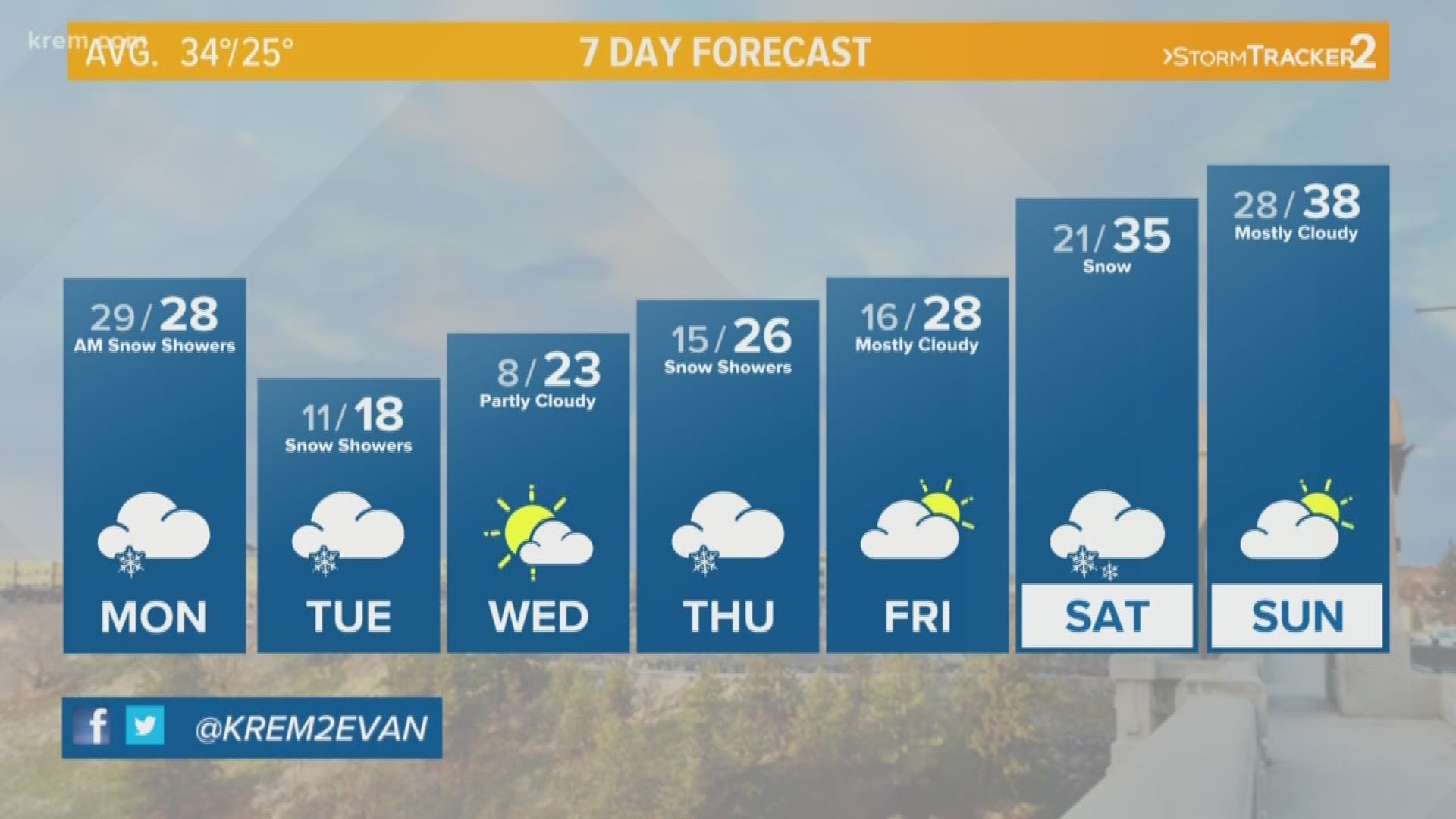 SPOKANE, Wash. — Roads are slick in Spokane and North Idaho on Monday after a round of weekend snowfall.

Snow continued to fall in Spokane on Monday morning but has since tapered off as of about 7 a.m.

KREM's Evan Noorani said Spokane picked up about an inch of new snow from Sunday night into Monday morning.

Areas such as Coeur d'Alene could see three to four inches of new snow on Monday.

KREM's Nicole Hernandez says roads around the Spokane area are snowy and icy on Monday morning.

The City of Spokane said crews have completed a full-city plow as of Monday morning, but they are still focusing on trouble spots and redoing main arterials.

Dozens of schools around the area are closed or delayed for poor road and weather conditions. Spokane Public Schools announced a two-hour delay, while major districts in North Idaho have canceled school.

Trace amounts of snow fell in Spokane on Saturday, with just over two inches falling on Sunday, Noorani said.

Snow showers could continue on Tuesday, but amounts should be light and the snow will likely be powdery,

More significant snowfall is not expected until Thursday and then again on Saturday.

The coldest temperatures of winter so far are expected to arrive in the Inland Northwest this week. NWS says the cold will be accompanied by blustery winds and the potential for blowing snow.

The windiest conditions are expected Monday, followed by the coldest temperatures on Tuesday and Wednesday.

NWS predicts that Spokane's high temperature will sit at 12 degrees on Wednesday, Jan. 15. Low temperatures could dip below zero in both eastern Washington and North Idaho.

Sensitive populations and people with livestock and pets should exercise caution due to an increased risk of hypothermia and frostbite.

Spokane set a record for snowfall on Friday.

According to KREM Morning Weather Anchor Evan Noorani, the National Weather Service in Spokane said Friday's 7 inches of snow broke the previous record for snowfall on Jan. 10. The previous record was 5.8 inches set in 1979.

Colbert had 8.3 inches of snowfall to end the week, while Sandpoint had 7 inches.

Residents woke up to more snow blanketing the area on Saturday and Sunday.

The Spokane Police Department said officers responded to more than 100 crashes on Friday, while Kootenai County deputies saw at least a dozen crashes and slide-offs in North Idaho.

Spokane County is also plowing all roads, according to County spokeswoman Martha Wheatley-Billeter.

Washington State Patrol troopers were already reporting multiple crashes on westbound I-90 at Sunset Hill at about 9:15 a.m. on Friday as roads began to freeze up in the Spokane area.

Other crashes were reported throughout Spokane County, with the State Department of Transportation adding that plows are making passes of I-90 and downtown Spokane.

Snow also started to accumulate on Highway 2 near Airway Heights on Friday morning, according to NWS.

RELATED: Inclusive Spokane program helps people get on the slopes