"A Cascadia earthquake will happen," said the lead investigator. "How well we prepare will make all the difference in how well we bounce back." 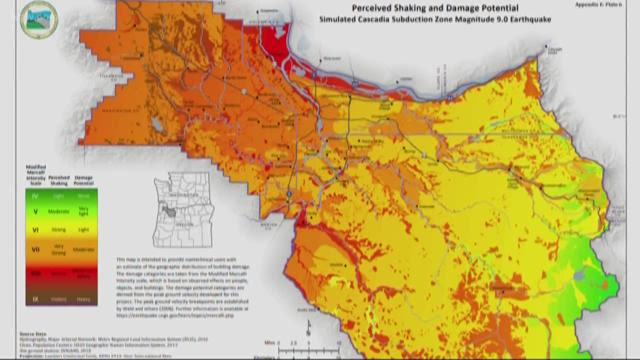 PORTLAND, Ore. - A new study shows a Cascadia Subduction Zone earthquake could injure 27,000 people, displace 85,000, kill 1,400 and cause $37 billion in damage to buildings in the Portland metro area alone.

There is as much as a 40 percent chance a magnitude 8.0 earthquake along the Cascadia Subduction Zone off the Oregon coast will take place in the next 50 years, according to Oregon State University. There is a 10-12 percent chance the earthquake will be a 9.0 or higher.

The Oregon Department of Geology and Mineral Industries (DOGAMI) conducted the study of a 9.0 magnitude earthquake's potential impacts on Clackamas, Multnomah and Washington counties in order to estimate the worst-case scenario.

The estimate of 27,000 injuries represents about 2 percent of the three-county population. About 20,000 of those will be minor injuries, the study shows.

The research included updated building and population data, current earthquake science, and new mapping and modeling techniques that give a clearer picture of potential impacts than older studies did, according to lead investigator John Bauer.

"A Cascadia earthquake will happen," Bauer said. "How well we prepare will make all the difference in how well we bounce back."

The report also breaks out by city the number of people who will need shelter, suffer injuries or die. In Portland, more than 30,000 will need shelter and more than 15,000 will be injured. The study predicts that 896 people will die in Portland city limits due to the earthquake.

In Forest Grove, where the damage risk is slightly higher than the metro area overall, the study projects that 1 in 10 people will need shelter and 1 in 40 will be injured during a Cascadia quake.

Click here for a summary of impacts by city

Rare Portland Hills quake could cause even more damage

In addition to estimating damage of the Cascadia Subduction Zone earthquake, the report looked at how damaging a 6.8 magnitude Portland Hills Fault earthquake would be. That fault runs right through dense population centers in the metro area and would cause far more damage in Portland than a Cascadia earthquake, due to the fault location.

The Portland Hills quake could destroy one in three buildings in the Portland metro region, displace as many as 257,000 people and injure 63,000.

The risk of that earthquake is far more unlikely than a Cascadia earthquake, according to Ali Ryan Hansen with DOGAMI.

"In the last 10,000 years there have been 40-plus Cascadia Subduction Zone earthquakes, compared to two Portland Hills Fault earthquakes in the past 15,000 years," Hansen said. "The Cascadia earthquake is not a matter of if but when. Portland Hills is a question mark as to whether it will happen at all."

While the earthquake will result in injuries and deaths, people are far more likely to be displaced from their homes. Hansen said residents need to figure out where they would go if a quake hit.

"People need to be thinking about, If my home isn’t safe to live in, what’s my plan for shelter?" She said. "Do I have friends and family who live in homes that were built more recently that are less likely to be damaged in an earthquake? Do I have room in my yard to put up a tent and should I plan to stay at my home but be in some other kind of shelter like a tent or an outdoor building?"

Hansen said people should have two weeks of food, water, first aid supplies and anything else they would need if the normal city services such as water and sewer were shut off.

Here's a video recap of the study

"Accurate estimates of injuries and people in need of shelter helps us plan to care for injured people, and to meet the needs of people whose houses or apartments won't be safe to live in," he said.

DOGAMI and RDPO will move on to Phase 2 of the study, which looks at earthquake impacts for Clark and Columbia counties. That should be complete in 2019.